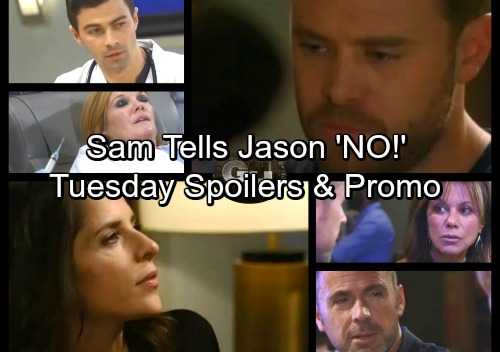 General Hospital (GH) spoilers for Tuesday, November 28, tease that Griffin (Matt Cohen) will grow increasingly concerned about Ava (Maura West). After a chat with Kiki (Hayley Erin), red flags were immediately raised. Griffin will continue to worry about Ava’s well-being. He knows that if she followed through on her plan, major risks are involved.

Griffin will hope that Ava will get in touch and let him know she’s OK. Meanwhile, Ava will begin to have doubts about her surgery. Griffin and Kiki’s warnings will undoubtedly ring in her ears. Ava will look nervous as the doctor prepares a syringe. Once she’s under anesthesia, there’ll be no going back. 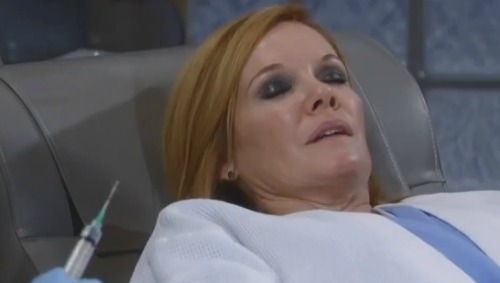 Fortunately, Griffin will show up just before Ava’s operation kicks off. It’ll lead to heated conflict, but Ava and Griffin will finally explore some deep issues later this week. For now, Alexis (Nancy Lee Grahn) will dive into her own problems. She was contemplating some alcohol when Julian (William deVry) walked in.

Alexis expects Julian to get a new trial, but it seems awfully quick for him to be out on bail. Perhaps this is simply a vision instead. Alexis has had Julian on her mind all evening, so maybe this is her brain’s way of dealing with temptation. Regardless, Julian will note that he only expects one thing of Alexis. He might push Alexis to stay sober and focus on her own happiness. 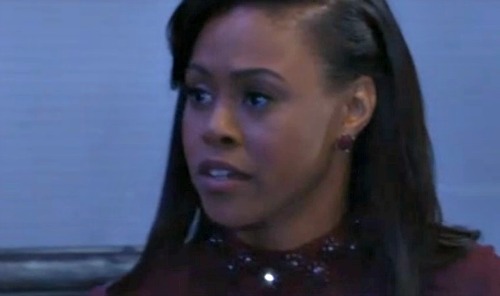 Of course, Alexis won’t truly be content until Julian is free and cleared of all charges. She’ll do everything in her power to make sure that happens. Across town, GH spoilers say Jason (Billy Miller) will have something important on his mind. He’ll make a suggestion, but Sam (Kelly Monaco) will argue that he doesn’t have to do it.

What task is Jason considering? Whatever it is, Sam may be nervous that it will put Jason one step closer to the truth. She’s probably becoming more and more convinced that the real story will only cause pain. 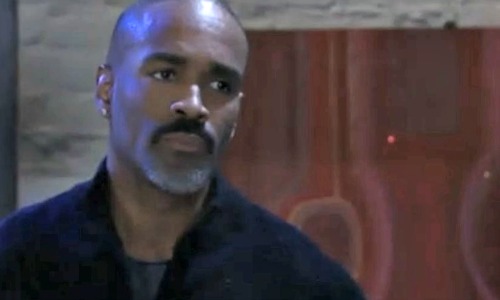 Elsewhere, Curtis (Donnell Turner) will deliver some news to Jordan (Vinessa Antoine). She’ll wonder if it’s about Andre (Anthony Montgomery). It looks like Curtis has indeed tracked Andre down, so they’ll have a chance to interrogate him soon. Jordan will beg Andre for answers on Wednesday’s new GH episode, November 29, so we’ll see what she can find out.

Other General Hospital spoilers say Oscar (Garren Stitt) will decide to sneak out of his house. He had a bizarre night, so he’d rather hang out with Josslyn (Eden McCoy) than sit home and mull everything over alone. Josslyn will do her best to lift Oscar’s spirits. She’ll have a surprise that she believes will blow Oscar away.

It sounds like some exciting scenes are coming up. We’ll give you updates as other General Hospital details emerge. Stick with ABC’s GH and don’t forget to check CDL often for the latest General Hospital spoilers, updates and news.