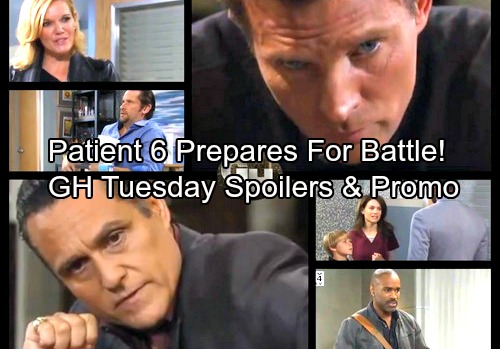 General Hospital (GH) spoilers for Tuesday, October 24, tease that Patient Six (Steve Burton) will prepare for battle. He knows he can’t let his guard down right now. Patient Six will have to stay on top of the situation and hope that he can figure something out. He’ll grab his gun and get ready for whatever comes his way.

Meanwhile, Sonny (Maurice Benard) will continue to ponder the strange message he received. He’ll open up to Carly (Laura Wright) as he deals with his curiosity. General Hospital spoilers say Sonny will just want to find out who sent that note. He can’t get past the fact that no one besides then Jason (Billy Miller) knew those details.

At GH, Ava (Maura West) will quiz Franco (Roger Howarth) about his artwork. She’ll suggest that she simply must know who he’s sketching. Franco will probably do his best to hide his Drew drawings, but Ava will still get caught in a mess on Tuesday’s episode. She’ll find herself looking for evidence a little later.

Will Patient Six reach out again and insist that he’s the real Jason? Will Ava seek proof that Patient Six’s claims are legit? Time will tell, but Ava will definitely be on a mission. Elsewhere, Stella (Vernee Watson) will also have a goal in mind. She’ll need Jordan’s (Vinessa Antoine) assistance, but she’ll have a hard time getting it.

When Jordan states that she can’t help, Stella will wonder if she can’t or won’t. She’ll think Jordan’s letting bad blood become an obstacle. Perhaps Stella needs Jordan to pitch in on another case at the hospital or even a personal matter. Since Stella can be awfully persuasive, there’s a good chance Jordan will cave eventually.

Other General Hospital spoilers say Nelle (Chloe Lanier) will have a chat with Michael (Chad Duell). She’ll mention making things more permanent, so maybe they’ll revisit the idea of moving in together. When Michael proposed that option during her apartment crisis, Nelle thought it was too soon. However, maybe Nelle’s starting to believe they should take the leap after all.

Unfortunately, Curtis could jeopardize Michael and Nelle’s plans. He’ll have some alarming news and Michael will likely be on the receiving end of it. Although Michael called off the investigation, Curtis may convince him to hear what he has to say.

Back at GH, Liz (Rebecca Herbst) will be taken aback when Andre (Anthony Montgomery) refuses to talk to Jake (Hudson West). He’ll declare that now’s not a good time for a therapy session. It’s clear that Andre knows more than he’s letting on about Patient Six and the twin drama. He can’t afford to sit around and help Jake tackle his Daddy issues.

It sounds like several storylines are heating up on the ABC soap. We’ll give you updates as other details emerge. Stick with GH and don’t forget to check CDL often for the latest General Hospital spoilers, updates and news.