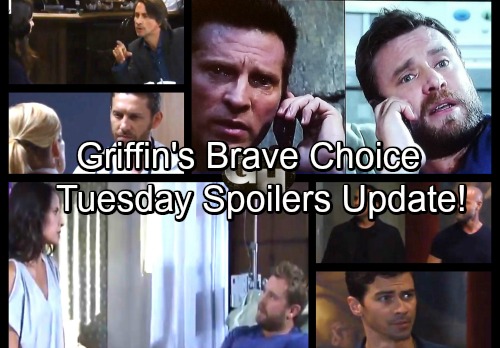 General Hospital (GH) spoilers for Tuesday, October 3, tease that both Patient Six (Steve Burton) and Jason (Billy Miller) will face some confusion. During their phone call, Burton’s character will try to figure out who he’s speaking with. Jason will wonder who’s on the other end of the line as well. Unfortunately, this guessing game won’t be resolved.

Some thugs are looking for Patient Six and they’ll soon encounter Griffin (Matt Cohen) at the church in St. Petersburg. Griffin loaned Patient Six his phone, so he’ll immediately recognize the description he’s given. Will he squeal on Patient Six out of concern for his safety or lead the thugs in the wrong direction? Either way, Griffin will battle some guilt.

At the clinic, Ava (Maura West) will refuse to give up on the restoration of her beauty. She’ll plead with Dr. Klein (Gene Farber) to reconsider his stance. Ava will hope that she can get the rest of the surgeries she came for, but she needs to focus on how she’s going to get home!

Thankfully, Griffin should be able to track Ava down before long. He just has to wrap up some Patient Six mayhem first. In the meantime, GH spoilers say Valentin (James Patrick Stuart) will have a lovely present for Nina (Michelle Stafford). He’ll wish her a happy anniversary as he places a black box in front of her.

Nina will open Valentin’s gift and most likely gush over it. Valentin may not be the best guy in the world, but he’s got this romance thing down pat. Back at Jason’s facility, Sam (Kelly Monaco) will suggest that she’s been doing some thinking. As they prepare for the rest of their lives, Sam will bring up some bright ideas. She’ll feel good about what’s ahead for their family.

However, Sam’s mistaken if she thinks it’s going to be smooth sailing from here! Patient Six’s arrival will eventually turn Jason and Sam’s lives upside down. In Monaco, General Hospital spoilers say Finn (Michael Easton) will ask about Anna’s (Finola Hughes) obsession. He knows Valentin became a menace, but he won’t see why Anna thinks it’s her fault.

Anna will explain why she feels responsible before pushing Finn to keep up the mission. They have to get info out of Cassandra (Jessica Tuck) or else Valentin’s rotten streak will continue. General Hospital spoilers hint that Finn and Anna’s plan will come with a few more setbacks. They could be getting in over their heads.

It sounds like some great scenes are ahead on the ABC soap. We’ll give you updates as other news comes in. Stay tuned to GH and don’t forget to check CDL often for the latest General Hospital spoilers, updates and news.