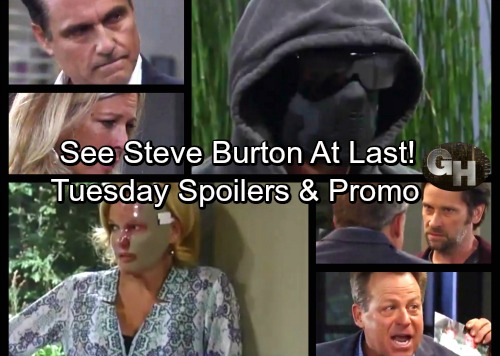 General Hospital (GH) spoilers for Tuesday, September 19, tease that the big day will finally arrive. Steve Burton (ex-Jason) will return to the ABC soap! Ava (Maura West) is growing increasingly curious about the man behind the mask. It turns out Burton is Patient Six and Ava could play a part in how that’s revealed.

At the clinic, Ava will wonder why everyone’s staying so tight-lipped. She’ll tell Patient Six that the staff is being particularly secretive about him. Ava’s doctor insisted that the other patients were none of her business, but she probably won’t butt out. It’s clear that Ava is dying to know more about this bizarre case. Fans can expect that Patient Six’s face-coving mask will be removed during this new GH episode!

At GH, Carly (Laura Wright) and Sonny (Maurice Benard) will talk to Jason (Billy Miller) by his bedside. It’s breaking their hearts to see him like this. Carly will tell Jason that he’s never leaving them again. She’ll be convinced that Jason is going to hang in there and get through this eventually.

Elsewhere, Scott (Kin Shriner) will try to stop Franco’s (Roger Howarth) dangerous search for answers. He’ll hold up the pic Franco’s been carrying around and shout that the kid next to him isn’t Jason. Franco will likely refuse to accept that. The resemblance is too close to call this a coincidence.

At the art gallery, General Hospital spoilers say Liz (Rebecca Herbst) will face questions. Felix (Marc Anthony Samuel) will show up looking for Franco, but he’ll learn the artist has disappeared. Liz will seem unsure of what to say when Felix wonders where Franco rushed off to. He’ll ask what could’ve dragged Franco away from his own opening.

Liz can tell something’s up, but she doesn’t know the details yet. Let’s hope Franco will fill his love in soon. In the meantime, Charlotte (Scarlett Fernandez) will have a request for Lulu (Emme Rylan) and Dante (Dominic Zamprogna). She’ll look upset as she says she needs to call her papa.

Across town, Valentin (James Patrick Stuart) will make a vow in front of Nina (Michelle Stafford). He’ll promise to do whatever he has to do for Charlotte. Valentin doesn’t intend on letting anyone or anything stand in his way.

Unfortunately, Valentin’s plan for Ava could lead to some unanticipated consequences. Anna (Finola Hughes) and Finn (Michael Easton) could stir up even more trouble. It sounds like a crisis is looming for Valentin and he may never see it coming.

General Hospital fans won’t want to miss all the action ahead. We’ll give you updates as other GH news emerges. Stay tuned to the ABC soap and don’t forget to check CDL often for the latest General Hospital spoilers, updates and news.