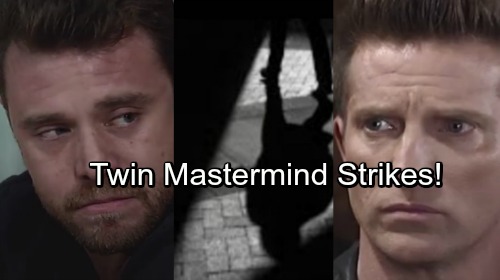 General Hospital (GH) spoilers tease that Patient Six (Steve Burton) and Sonny (Maurice Benard) will explore some news angles. They’ll do whatever they can to prove Patient Six is who he claims to be and put an end to the Jason Morgan war. Sonny will promise P6 that they’re going to find the evidence they need.

Of course, the first sign of proof won’t be the end of the story. Jason (Billy Miller) and Patient Six will probably pass the title back and forth in the coming months. This hot plot’s full of twists and has layers that will peel back slowly. Besides, winning the Jason Morgan name isn’t even what’s most important in all of this.

The bigger question involves the mastermind of this operation. Who stole the twins for this memory mapping study and why? General Hospital spoilers say we’ll learn a few more clues soon. Patient Six and current Jason (Billy Miller) will get closer to the truth with the help of their allies.

It looks like the mastermind could get a little nervous as time goes on. Once the walls start closing in, he or she may make a desperate move. GH fans can expect some scary moments for Patient Six, Jason and their mutual loved ones. However, there’s a good chance classic Jason’s team will be in the most danger.

Dr. Klein (Gene Farber) and his thugs kidnapped Sam (Kelly Monaco) in hopes of capturing Patient Six. They botched the job and P6 saved the day, but more drama’s looming. General Hospital spoilers hint that someone connected to the Jasons will land in harm’s way.

Sam’s already had a run-in with peril, so maybe GH will go with another option. Sonny’s a possibility, but it hasn’t been all that long since he was near death in a pit. Perhaps General Hospital will put someone else at risk just for variety’s sake.

Could Carly (Laura Wright) be the one who faces danger? Now that classic Jason’s back in town, Carly sticks to him like glue. These besties definitely care about each other. If a baddie goes after Carly, it could motivate Patient Six to do what he’s told. The twin study boss could shift the balance of power.

Robin (Kimberly McCullough), Jake (Hudson West), Danny (T.K. Weaver), Michael (Chad Duell) and even Liz (Rebecca Herbst) are all options, too. Closeness will matter, but convenience may win out in the end. The person who’s most vulnerable in that moment could be targeted.

Will Jason and Patient Six have to come together in a time of crisis? Will the threat force their separate missions to collide? We’ll give you updates as other GH details emerge. Stay tuned the ABC soap and don’t forget to check CDL often for the latest General Hospital spoilers, updates and news.