General Hospital Spoilers: Wednesday, December 6 – Sam Works To Get Drew Out Of Jail – Maxie Gets Arrested 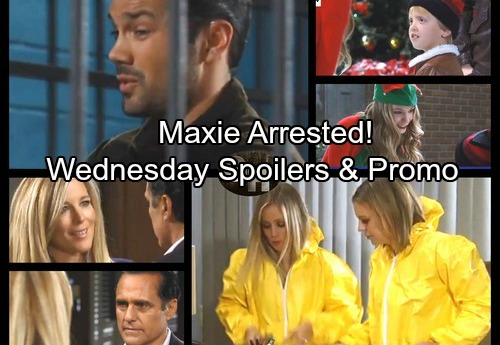 General Hospital (GH) spoilers for Wednesday, December 6, tease that Julian (William deVry) will start a war with Olivia (Lisa LoCicero). With Alexis (Nancy Lee Grahn) by his side, Julian will declare that he’s there for his son. Olivia will be caught off guard, but she may just have to get used to the idea. While he awaits a new trial, Julian won’t see any reason why he shouldn’t visit Leo.

Olivia should put up a fight, but that’s undoubtedly why Alexis is there. She can offer legal guidance and hopefully convince Olivia to back down. Meanwhile, Michael (Chad Duell) will take Rocco (O’Neill Monahan) to see Santa. General Hospital spoilers say they’ll run into Nelle (Chloe Lanier), who’ll be dressed as an elf.

It seems Santa’s helper is trying to earn some extra Christmas cash. If it happens to be charity work instead, it’ll no doubt be a ploy to win Michael over. Nelle’s certainly not that selfless! Regardless, Nelle will make some progress with Michael in Wednesday’s GH episode. Naturally, the peace won’t last.

Nearby, Jordan (Vinessa Antoine) will wonder if Curtis (Donnell Turner) is ready to play Santa Claus. He’ll gripe about taking on this job, but Jordan will urge him to follow through on his commitment. Of course, she’ll have to chuckle when she sees Curtis in a Santa suit. Some fun scenes are coming up for these two.

Other General Hospital spoilers say Lulu (Emme Rylan) and Maxie (Kirsten Storms) will discover some stunning evidence. It looks like they’ll find something that confirms Nelle is the Ask Man Landers leak. Unfortunately, they may have to celebrate behind bars. GH’s preview video shows Nathan (Ryan Paevey) scolding someone in lockup. It appears he’ll wonder what in the world Maxie was thinking.

Elsewhere, Sonny (Maurice Benard) will suggest that the twin drama is done and now they can move on with their lives. He’ll be glad that they got Jason (Steve Burton) his name back. Carly (Laura Wright) will be surprised by Sonny’s thoughts on the matter. She’ll argue that nothing is really settled here. Carly probably won’t think this is over until Jason has Sam (Kelly Monaco) and his kids back. Somebody needs to give Carly a wake-up call – Sam is not property and gets to make her own decisions.

Across town, Sam will track Alexis down to deliver a desperate plea. She’ll beg Alexis to help her get Drew (Billy Miller) off the hook for desertion. He should have a pretty good case since he only recently found out he was a U.S. Navy SEAL. Drew’s memory loss prevented him from knowing he had anywhere he needed to return to. He’s inadvertently been living his twin brother’s life.

Sam will be determined to clear this up as soon as possible. Can Alexis help Drew out? We’ll give you updates as other GH news comes in. Stick with the ABC soap and don’t forget to check CDL often for the latest General Hospital spoilers, updates and news.