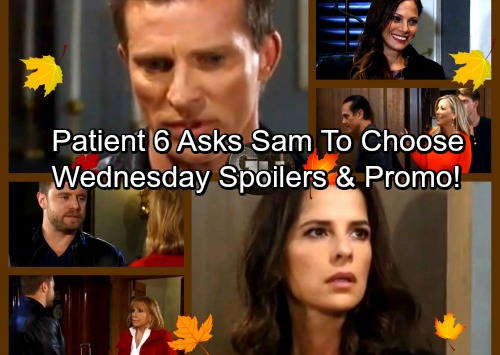 General Hospital (GH) spoilers for Wednesday, November 22, tease that Patient Six (Steve Burton) will have a deep conversation with Sam (Kelly Monaco). He’ll hope that she doesn’t feel pressured by his arrival in town. Michael (Chad Duell) told P6 about some of his own relationship woes. It appears his admission prompted Patient Six’s sudden trip to Sam’s place.

Michael suggested that if Nelle (Chloe Lanier) had given him space and stopped pushing so hard, they might’ve been able to work things out. Patient Six certainly hasn’t been pushy, but he might worry about messing this up anyway. He may insist that he can step back completely if that’s something Sam needs.

Patient Six will urge Sam to tell him what she wants him to do. Sam may not know how to answer that, but she’ll give it her best shot. They’re both dealing with a difficult situation, so they’ll just have to face the obstacles as they come.

Across town, Carly (Laura Wright) will be thrilled when Oscar’s (Garren Stitt) mom shows up. Dr. Kim Nero (Tamara Braun) will introduce herself and get acquainted with Josslyn’s (Eden McCoy) loved ones. She’ll enjoy chatting with Sonny (Maurice Benard) and Carly for a while, but it looks like Patient Six’s return will throw her for a loop. He’s presumably got the face of her former flame. 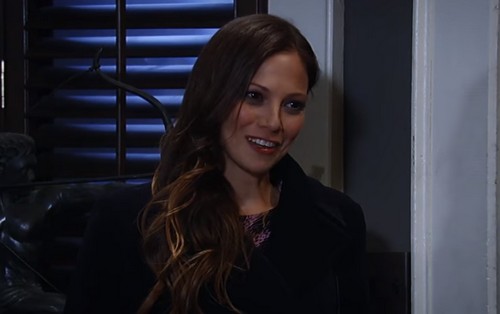 Other General Hospital spoilers say Maxie’s (Kirsten Storms) behavior will leave Nathan (Ryan Paevey) with questions. He’ll ask if Dante’s (Dominic Zamprogna) noticed anything weird about her. Nearby, Lulu (Emme Rylan) will want to know if Maxie’s pregnant or not. Maxie still hasn’t divulged the truth about her pregnancy test results.

There’s a good chance Maxie indeed has a bun in the oven, but she probably won’t be ready to reveal that to Nathan just yet. Nevertheless, a big announcement is coming up next week. Stick with GH to see if that’s when Maxie will come clean to her hubby.

Elsewhere, Jason (Billy Miller) will stop by to see Monica (Leslie Charleson). He’ll just want to make sure that they’re still good. All the naysayers are really starting to get to Jason. Monica will suggest that this is tricky, but she has plenty of love and support to offer both twins.

Meanwhile, Dr. Bensch (James DePaiva) will wear an apron as he brings out a tray of food. He’ll wish Alexis (Nancy Lee Grahn), Molly (Haley Pullos), Stella (Vernee Watson) and TJ (Tequan Richmond) a happy Thanksgiving. Dr. Bensch will be in a great mood, but don’t expect it to last indefinitely. Alexis is hung up on Julian (William DeVry), so more trouble’s brewing.

It sounds like Alexis’ life will continue to be complicated. We’ll give you updates as other General Hospital news comes in. Stay tuned to ABC’s GH and don’t forget to check CDL often for the latest General Hospital spoilers, updates and news.