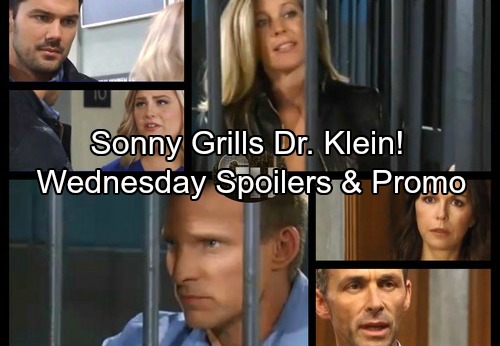 General Hospital (GH) spoilers for Wednesday, November 8, tease that Valentin (James Patrick Stuart) will have a change of heart. Now that Cassandra (Jessica Tuck) has introduced herself to Nina (Michelle Stafford) and Charlotte (Scarlett Fernandez), Valentin wants to take care of this growing threat. When his family’s on the line, Valentin doesn’t take chances.

Anna (Finola Hughes) will be pleasantly surprised when Valentin wants team up with her. He’ll note that he agreed to work with Cassandra, so he’s ready to serve as Anna’s spy. Valentin will contend that they have to bring Cassandra down. They may have different motives, but at least they’re on the same side for once.

Meanwhile, Chris Van Etten will debut as Chet. General Hospital spoilers say Amy (Risa Dorken) will have major concerns about her brother. Chet survived his opioid overdose, but Amy will worry that he could land behind bars. Nathan (Ryan Paevey) may be in a tight spot, but he’ll probably assure Amy that Chet’s not getting arrested. You can bet that Nathan will do whatever he can to help.

In Chet’s room at GH, Finn (Michael Easton) will congratulate him on surviving. Perhaps Finn’s personal experience with drug addiction will come in handy. He can attempt to put Chet on a better path, but it won’t be easy. Chet has some deep issues and no one can truly understand how he’s feeling. Let’s hope Amy can hang in there and get him through this.

Other General Hospital spoilers say Michael (Chad Duell) will pass along some important news. Dreams do come true for Carly (Laura Wright)! She’ll be thrilled when she finds out Michael and Nelle (Chloe Lanier) are over.

Michael will also open up to Sonny (Maurice Benard) about his failed romance and possibly the Patient Six (Steve Burton) chaos. Later, Sonny will manage to corner Dr. Klein (Gene Farber). He’ll point out that he knows the doc was drugging Patient Six and holding him hostage. Sonny will demand the name of the person who gave Dr. Klein the order.

In lockup, Patient Six will get another visitor. Carly will stop by with some updates and they’ll try to figure out what’s next. She’ll promise that she’s going to help classic Jason get his life back, but current Jason (Billy Miller) will continue to create obstacles.

At Crimson, Nelle will admit she’s really strapped for cash. She might be desperate enough to ask Nina for her next paycheck in advance. However, Nelle could have a bigger plan in mind soon. She’ll take a risk that could change everything in Wednesday’s episode.

Nelle knows about Valentin’s connection to Cassandra, so will she take advantage of that? We’ll keep you posted as other GH details emerge. Stick with the ABC soap and don’t forget to check CDL often for the latest General Hospital spoilers, updates and news.