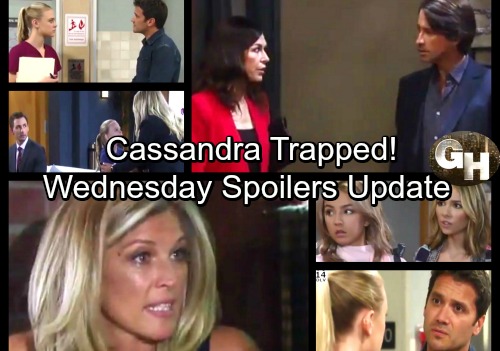 General Hospital (GH) spoilers for Wednesday, September 20, tease that Valentin (James Patrick Stuart) will take Charlotte (Scarlett Fernandez) to Shriners’ Hospital so she can support her pal. Bailey (Londyn Silzer) may have scoliosis, but she’ll need some tests to confirm it. Valentin will fulfill his promise by being there every step of the way.

Once Valentin and Charlotte are in the waiting area, Lulu (Emme Rylan) will arrive. She’ll suggest that she wanted to come for both Charlotte and her friend. General Hospital spoilers say Lulu will have a chance to chat with Valentin while they await news.

When Valentin shows off a softer side, Lulu will be surprised. She’ll sense that maybe Valentin isn’t as cold and calculating as she thought – at least not all the time. Meanwhile, Kiki (Haley Erin) will get grilled at GH. Dante (Dominic Zamprogna) will suspect that something’s going on between Valentin and Ava (Maura West).

General Hospital spoilers say Dante will be confused about the sale Ava supposedly made to Valentin. He’ll wonder why she was striking a deal if Valentin considers her such a threat. Kiki may explain that Ava was trying to cover up the true story. Thanks to their agreement, Valentin got rid of a problem and Ava is preparing to recapture her beauty.

It looks like Dante will give Lulu some details later this week. For now, Carly (Laura Wright) will seek updates from Michael (Chad Duell). She’ll hope to hear that Michael kicked Nelle (Chloe Lanier) to the curb. Instead, Michael will indicate that he believes Nelle’s version of events.

GH spoilers state that Carly will scold Michael for being gullible. She’ll insist that this is about more than her personal hatred for Nelle. Carly will think Michael should be concerned about putting himself at risk. When Michael reiterates that he has faith in Nelle, Carly will push him on this anyway. She’ll insist that even if Nelle’s innocent, he should want proof.

Of course, Michael may wonder how he’s supposed to get it. Zack is the only other person who knows what happened and he’s dead. Even if Zack miraculously returned, it’d still be a case of “he said, she said.” As Michael considers his options, Nelle will get some advice she didn’t see coming. Let’s hope it helps instead of hurts!

Elsewhere, Anna (Finola Hughes) and Finn (Michael Easton) will get ready for their meeting with Cassandra (Jessica Tuck). When Finn gripes, Anna will remind him that the end justifies the means. Duping Cassandra is the only way to get solid answers about Valentin’s shady actions.

Molly (Haley Pullos) will also have some complaints on Wednesday. She won’t approve of Kristina’s (Lexie Stevenson) choice, which undoubtedly involves talking to Parker (Ashley Jones). We’ll keep you posted as other GH info comes in. Stay tuned to the ABC soap and don’t forget to check CDL often for the latest General Hospital spoilers, updates and news.