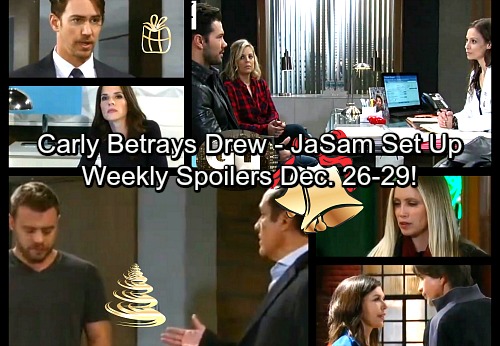 General Hospital (GH) spoilers for the week of December 26-29 (Monday, Dec. 25 is a rerun) tease that we’ll see some scheming and dreaming. For starters, Carly (Laura Wright) will get to work on a new plot. Since Jason (Steve Burton) won’t fight for Sam (Kelly Monaco), Carly will believe she needs to play dirty. She might feel a hint guilty about disregarding Drew’s (Billy Miller) feelings, but not guilty enough to back out of her plan.

It looks like Carly will sabotage Drew’s car in hopes of delaying his arrival. She’ll also arrange a meeting between Jason and Sam. Voila! It’ll be a Drew-free New Year’s Eve for JaSam. General Hospital spoilers say Sam will indeed grow closer to Jason as the year wraps up. However, Carly won’t get away with this. It won’t be long until Jason figures out what kept Drew away.

Jason will lash out at Carly for interfering. He won’t like being manipulated and he won’t think it’s fair to shove Drew out of the picture. It seems Ava (Maura West) will also do some relationship meddling. She’ll fear that she crossed the line this week and this could be about Nelle’s (Chloe Lanier) fight for Michael (Chad Duell).

Meanwhile, Dante (Dominic Zamprogna) will go from proud to concerned. Lulu’s (Emme Rylan) latest story will be a success, so Dante will beam with pride. Unfortunately, her next one could come with danger and Dante just won’t be on board with that.

Other GH spoilers state that Nathan (Ryan Paevey) will score info from Dr. Obrecht (Kathleen Gati). She’ll make a surprising admission, but this won’t be the end of the paternity mystery. Nathan will have many questions and he’ll have to work hard to get the answers. 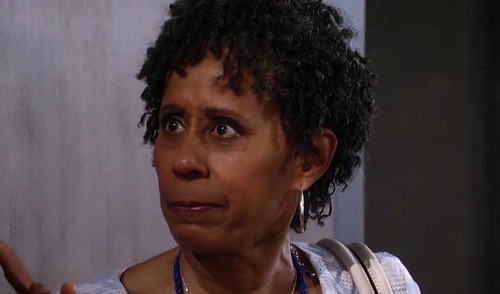 Elsewhere, Stella (Vernee Watson) will get into a shouting match with Laura (Genie Francis). She’s always finding something to complain about! Over with Anna (Finola Hughes) and Finn (Michael Easton), some progress will be made. Anna will pull off a win in their fight to bring down Cassandra (Jessica Tuck), but a loss will soon follow.

General Hospital spoilers say Finn and Anna’s mission will come with major issues. After Finn bugs Cassandra’s phone, things will get tricky. If Cassandra catches on, she may seek revenge in a big way. We’ll give you updates as other GH news comes in. Stay tuned to the ABC soap and don’t forget to check CDL often for the latest General Hospital spoilers, updates and news.