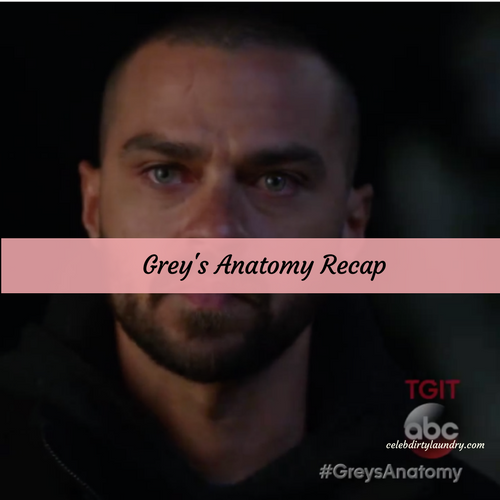 Jackson knew that his father was going to be in Montana. But he pretended as if it hadn’t mattered and had even told his mother that he was just flying out there because he had a patient that needed a throat transplant as well as a perfect donor at the same hospital. So Jackson claimed he had no problem with going to Montana however his mother had tricked him at the last minute and had made sure that he had April with him when he had explicitly asked for Meredith. And so Catherine had played a little trick on him. It was just that she knew he would need emotional support and couldn’t think of anyone better than April.

April and Jackson have been though a lot together and, while they may be going through a rough patch, their bond was unlike any other. So Catherine had tried what she hoped would work and that the two could get over whatever was in their way yet she hadn’t counted on Jackson being fine one moment and completely losing it the next. Jackson had gotten angry that April was going on the trip and he had then sideline that in order to focus on their patients. And so Jackson had been left with the responsibility of talking the father of the brain-dead child into donate his son’s organs and he had also had to convince the other parents to accept the throat surgery.

Yet, Jackson started to suffer a setback after he left the hospital and he had some free time to himself. He had gone to his father’s bar because that’s what his father decided to do with his life after he left his wife and son though Jackson had still wanted to see the him and he had thought he would reveal himself. So Jackson had gotten the whole scene worked up in his head and it turned out he choked. He pretended to be like everyone else and had ordered so much to drink as he waited to gain courage that he got drunk just when he was needed. April had apparently tried calling him and over and over again because their throat transplant fell through.

The donor unfortunately, had some on his vocal chords that meant it wasn’t viable anymore and, to make matters worse, the little girl that was expecting the transplant had had a condition that was worse than what the doctors initially thought. So it was a double-whammy, but the parents of the little girl didn’t want to hear it. They said that their daughter could still get the surgery if she went to a different hospital and so they wanted to risk transferring her because another doctor had promised them what they wanted. Which was for their daughter to get her tumor removed and still be able to talk. Though what truly motivated the parents had been the fact Jackson was missing.

Jackson was the one that told the parents that he was a father himself and that he wouldn’t risk performing a surgery that he knew wouldn’t work. But he built up their hopes to a point that they thought their daughter was finally going to get the surgery. So when Jackson suddenly became MIA when they had found out everything was a no-go, they lost faith in him and they didn’t want to hear about alternative measures if their daughter lost her voice. And so April had been furious with Jackson. She had been trying to reach him for hours and then to learn he was at a bar the whole time – she snapped.

April took him to task for flaking out after making so many promises. However, Jackson hadn’t been in the mood to argue and he had flounced off. So April had stayed seated until she could calm down and she had struck up a conversation with the bar owner. He had revealed that he used to be a surgeon and that he gave it all up one day because owning a bar meant he could still be there to comfort others without the risk of them dying. And it wasn’t until he said his name was Robert Avery that it clicked for April. She realized that he was Jackson’s father and that Jackson had taken on the case partially so that he could meet his dad.

Yet, April had later tried to talk to him about it and he admitted that he couldn’t do it. He said he tried and that nothing would come out. So April had realized that speaking to his father was stopping him from focusing on the problem with their patient and she decided to push Jackson. She had taken him back to the bar and she had told him that they weren’t leaving until he talked to his dad though she wasn’t going in with him. She said that the conversation was between Jackson and his father so she waited outside ready to be there if he needed her. Which he later did when the conversation he’d been dreaming about hadn’t ended the way he wanted.

Jackson had revealed who he was and his father had been happy to him. Though the problem was that the other man had been too happy. He talked about his life and he was constantly jumping from one topic to another, but he never once said he had missed Jackson or that he was sorry he had walked out. So Jackson had walked out of the bar without saying anything because he never thought that his father wouldn’t have regretted walking out of his life. And so Jackson and April had had a long conversation about what happened and they had even worked out how to help their patient because Jackson had gotten tired of moaning about his dad.

So Jackson and April performed a one of a kind surgery. They had used the girl’s stomach to recreate her vocal chords and the surgery had been a success. The little girl’s bandages came off within a few days and she was able to speak. But Jackson and April had gotten to such a good place afterwards that sort of slept together and didn’t even need to discuss what it meant for them however they did talk about his dad again. April had told Jackson that he was nothing like his father because he had been there for her and the baby from the very beginning and so April told Jackson that he should what he has to say to his father.

And, really, all he had left to say to Robert Avery was goodbye!

Jackson didn’t need his father to be part of his life anymore and he came to appreciate Catherine because she had raised him a single parent.