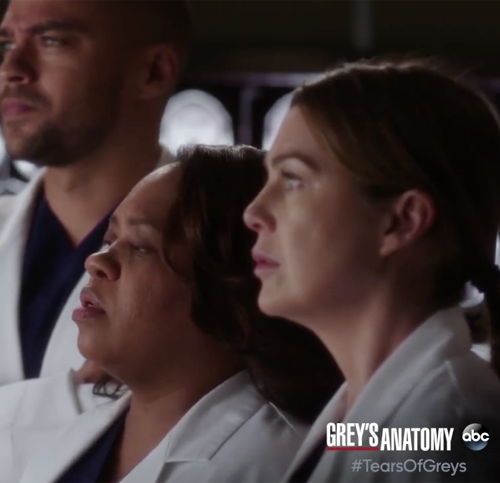 Maggie stopped being a doctor on tonight’s episode of ‘Grey’s Anatomy” however she refused to see it because her mother was the patient. Diane needed surgery to remove the tumor as well as chemotherapy to get better. But Maggie who was supposed to be her support went a little overboard. She kept pushing the doctors on Diane’s case to take risks they normally wouldn’t have and she thought she knew what was best for her mother. So Maggie argued with the doctors over treatment and she eventually fired Meredith from her mother’s case because Meredith wouldn’t perform a risky surgery on a weak patient.

However, Maggie was in a rush. She pushed and kept pushing because she wanted her mother to be healed now rather than later. So the need to help her mother clouded Maggie’s judgement and the other doctors didn’t know what to with her. They talked about Maggie being a problem amongst themselves and even got Meredith’s opinion behind Maggie’s back.  However, no one wanted to let Maggie down so they did their best to accommodate Maggie and her idea to try an experimental treatment regardless of what they thought. And so everyone kept their mouth shut as Diane struggled through her new treatment.

The new treatment caused Diane pain, night sweats, and the doctors could tell that it was killing her faster than the cancer. Yet, Maggie’s friends and family remained silent while she kept telling her mother what was best for her. So Diane tried to find her own happiness. She taught her daughter how to cook her special lasagna and cajoled Maggie into calling over her friends for a nice dinner party though Diane  later brought up an awkward subject. She thanked Richard for her incredibly smart daughter and she said that she wanted to pay her respects to Ellis as well so she asked where Ellis was buried.

Except Ellis wasn’t buried. Meredith and Richard said “screw it” and they threw Ellis’s remains down the sink in her favorite OR. Though the mere thought of that had caused Diane to laugh and every one at the table began to laugh as well. So that cut some of the tension surrounding the awkward subject of death and, but then Diane’s laughter turned into a cough that wouldn’t stop and Maggie was forced to take her to the hospital where she thought everything would become better. And it didn’t. Diane’s cough was a symptom of a more serious condition and the fact of the matter was that she was dying.

There was just no away around that! Diane’s cancer had been too aggressive and her treatment while experimental had been too harsh. So it all broke a once capable and strong woman because Diane did  not want to accept the inevitable and kept pushing her body to the point of killing herself to spare her daughter any pain.

Diane told Richard that she had grown up with nothing and hadn’t anything to cherish until Maggie had been put in her arms. But Richard said that Diane shouldn’t keep doing this for Maggie and that she had to think about what she wanted. And Meredith had reiterated that to Maggie.

Meredith told Maggie that Diane didn’t know what she wanted or what was best for her because Maggie was always standing over her and demanding things be done her way. However, Maggie didn’t what to hear what Maggie was saying and she snapped at Meredith. She said that Meredith couldn’t possibly understand her situation because she loved her mother enough not to say screw it and throw her down the damn drain. So that hurt Meredith and Riggs who tried to be there for her and she pushed him away because she didn’t want to talk about it and so he had tried to comfort Maggie.

Riggs went to Maggie and he had just went to hug her because he knew that was what she needed. Yet, Maggie and her mother did have the talk later on. They both acknowledged that Diane’s treatment wasn’t working and that Diane should be allowed to do things her way which was to stop treatment. Diane hadn’t wanted to die in pain or without dignity. She just wanted the chance to have long conversations with her daughter again and she got that back when Maggie finally let her mother decide what was best. So the two had talked about everything towards the end and they had even discussed Maggie’s sex life or lack thereof.

Though Maggie hadn’t wanted to talk about that sort of thing with her mother and she had also tried to refuse her mother’s engagement ring because it made her too sad to think about accepting it. So while Maggie accepted her mother’s decision, she also wanted to put off having to think afterward and that hadn’t been good for her. She had eventually fallen apart when her mother died and hadn’t wanted to leave her mother’s side or have someone remove the body, but Richard knew what Maggie needed and he had flown in her father.

So Maggie got to have her dad’s support and he knew what she needed, however, Richard thought about Ellis and how she denied without forgiving him which in turn had cost him more than he knew. And so that helped because he finally forgave Bailey. Richard realized he didn’t want to stay angry with her till the end. But as for Meredith and Riggs, the two decided that now wasn’t the time for them because Maggie was going to need Meredith.