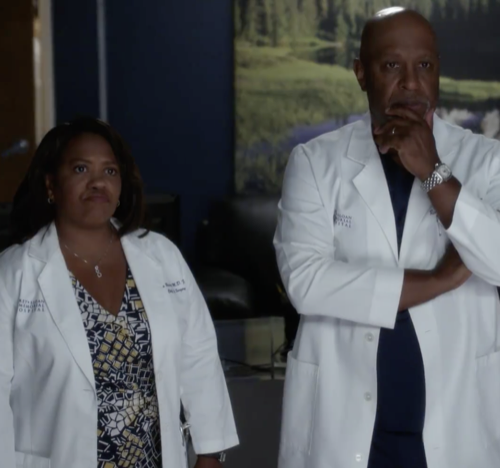 Tonight on ABC their hit drama Grey’s Anatomy returns with all-new Thursday, September 28, 2017, season 14 episode 1 & 2 and we have your Grey’s Anatomy recap below. On tonight’s Grey’s Anatomy season 14 double episode premiere called “Break Down the House / Get Off on the Pain as per the ABC synopsis, “In the Season 14 opener, Owen’s sister receives help from Meredith and the team. Meanwhile, Bailey must give the hospital a face-lift after the fire; Jo makes a surprising choice regarding Alex; and controversial research leads to a shocking discovery.”

The show opens with Megan being brought home via a helicopter. She is on a gurney and first asks who Owen is as if she doesn’t know him then laughs and says just joking. Megan then tells Owen about her time in Iraq. She was treated well but forced to work as a trauma surgeon. Miranda thanks all of the hospital staff for their hard work and keeping their heads during the events of the night before. There were minimal injuries but several clinics were damaged. Sara tells Jo that Miranda fired Eliza and she doesn’t know how to be supportive. Owen tells Richard he needs to take some time off. He will tell Miranda.

Amelia is obviously tense that Megan is back. Nathan tells Megan that he has met someone but she isn’t Megan. The team tells Megan that they can do several surgeries to mend her wounds but it will be risky and there is no guarantee they can fix everything. She wants to go for it and then tells everyone she has to go back to Iraq because her child is still there. Everyone is shocked. She adopted an orphan and she has to go back and get him.

Meredith and Nathan talk and he questions if Meredith is the best person to do the surgery on Megan. She promises she is. Jo complains to Ben that she doesn’t know what she is going to do without Stephanie. He says way to make Stephanie’s situation about you. Alex tells Jo that she will be doing a complex surgery on her own. She is thrilled.

Miranda tells Richard the new students are here and he has to deal with them. He is not thrilled. Megan asks Meredith and Owen who is Nathan dating and for how long? Owen changes the subject quickly. Richard gives the students a tour and they witness a trauma that causes one of the students to faint and another to scream. Megan promises Owen that she is OK and learns about their mom’s romance. Jo does to Eliza’s apartment and finds it empty. She has moved without telling her. Teddy returns to see Megan and Owen is thrilled.

Teddy visits with Megan. Megan jokes with Nathan, Teddy and Owen. Amelia and Luka present their case of a 9 year old boy with a cancerous tumor. Several of the other doctors disagree with their treatment plan. Jo complains to Ben about her current situation and he says he is not willing to be her new Stephanie. Jo presents to the new students and Richard continues to find them annoying. Arizona is thrilled to see Teddy and immediately tells her all of her problems. Nathan watches as Megan’s surgery begins.

Teddy finds Owen having an anxiety attack and talks him down. She then tells him she is not going anywhere. Megan’s surgery goes well as the damage to the hospital is repaired. Megan gets a text from her son and is thrilled. She says it will take years for her to get him into the country and in the mean time she just wants to get back to him. Owen tells Teddy about Nathan and Meredith’s relationship and that he doesn’t want Megan to know anything about it.

Amelia and Luca begin the operation on the boy as the students watch. Teddy chews out Meredith for working as Megan’s surgeon without tell her about her relationship with Nathan. Amelia jumps in and tells Teddy off. Teddy asks why Amelia hasn’t been there for Owen and his sister. They all storm off. One of the student leans in to get a better view of the operation and his glasses fall into the open wound. Richard gets them out of the OR immediately. Luca tells Amelia she needs to get some rest but she refuses. She tells Avery how he can help on the next surgery on the boy but he refuses. He insists the boy needs radiation not surgery.

Alex and April tell Richard he needs to get rid of the students because they are a mess. He tells them both off and reminds them of their humble beginnings. Teddy and Nathan talk and he says it is over with Meredith and was the minute he found out Megan was alive. Maggie overhears the conversation and tells Nathan he needs to tell Megan the truth. Meredith confides in Alex about Megan and he asks for advice with Jo.

Maggie tells Avery that she has been avoiding him because April said he was into her. He asks confused and she leaves. Meredith tells Megan about her past relationship with Nathan. She handles it well but is disappointed that Nathan didn’t tell her. Meredith and the team start the second operation on Megan. Arizona has a drink in a bar and is approached by a woman who flirts with her. The surgery takes hours. Luca approaches Jo and tries to talk to her about Amelia but she makes it very awkward and he leaves. Jo really wants to reunite with Alex but knows it is a very bad idea.

Luca returns home to find Arizona making out with the Italian woman. He argues with the woman in Italian and it obvious that they know each other. Meredith realizes she doesn’t have enough tissue and she can’t close Megan’s wound.

Megan is devastated that the surgery didn’t work. Meredith is also very upset. Luca and the woman continue to argue and Arizona realizes they are brother and sister. Luca leaves and the woman continue on the couch. Jo hooks up with the student who dropped his glasses in the patient. Meredith doesn’t want to get out of bad but Alex and Maggie talk her through it. She realizes how she can help Megan. She calls the team in and tells them she wants to do an abdomen wall transplant. She wants Teddy to scrub in to help.

Avery confronts April about she told Maggie but she blows him off. Jo tells Ben about her encounter with the student. Alex over hears and laughs in her face. Megan’s mom does not support the surgery but she says it has to be done. Maggie and Avery have another awkward encounter. Meredith uses the students to find a donor for Megan. Luka’s sister joins the hospital staff. Avery and Amelia continue to disagree about the treatment for the nine year old boy. Avery brings his concerns to Miranda but she supports Amelia. Owen, Teddy and Nathan try to get Megan’s son into the US but can’t get any cooperation.

Luca’s sister conducts research on the female orgasm and several of the other staff are very interested. Ben becomes Jo’s confidant. April offers Nathan support and Jo finds a donor for Meredith. Megan, Teddy and his mom confront Owen about his marriage.

He denies there is a problem but it turns out they were joking to get Owen to agree to take care of Megan’s son is she dies. As Nathan asks Megan to marry him Meredith walks in to tell her they have a donor. It is very awkward. Owen tells Amelia that he thinks she needs help. She attacks his family verbally and tells him if he wants to be with Teddy go for it. She doesn’t care. The transplant operation begins and the entire hospital watches. Ben can’t take listening to Jo anymore and tells Alex that Jo is afraid of him. He has to do something.

Amelia calls Avery away from his surgery to help with the 9 year old boy. He is furious but she says it is kind of like Legos and she has a piece of his jaw that she can’t get to fit back in. Megan’s surgery is a success and she is thrilled. Amelia’s patient also is cured but Avery is very angry at how she handles it. April confronts Avery about what happened in Montana and says their relationship is causing her pain. She says she has to move it. Owen tells Teddy that Amelia doesn’t want to be married to him and he kisses Teddy. She pulls away and tells him they can’t do this while he is still married.

Amelia volunteers for Luca’s sisters study. Alex talks to Jo and tells her he found her husband. She kisses him and they have sex. Meredith finds Nathan upset and he says Megan won’t marry him. She thinks he is in love with Meredith. Amelia comes out of the MRI and sees the scan on Luca’s sister’s computer. She asks whose brain has a tumor. They look at her in silence.