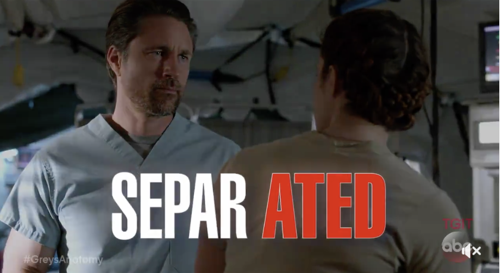 Megan and Farouk were leaving Seattle. They were moving with Riggs to LA and were saying goodbye to the family they were leaving behind. But this time, it had been hard for Owen to say goodbye to his little sister. She had only just come back into his life and he had been worried about losing her again. So Amelia had tried to calm Owen and remind him that Megan would be back for the holidays however that wasn’t what Owen needed to feel ok and so he took a risk. He got into the car with his sister and told her they were going on a road trip together.

Owen knew he would feel better about Megan moving if he went out to LA and saw her new place for himself. But he couldn’t help remembering the last time he had let go of her. They had both been in the army and were stationed overseas yet things hadn’t always been easy for them. They had been fighting about a recommendation Megan thought she deserved and had blamed her brother for not sticking up for her when the recommendation went to someone else. So a road trip with Owen hadn’t sounded like such a good idea to Megan.

Megan had told her brother that she didn’t need a babysitter and he had claimed that he was going just to help with the drive. But Megan remembered what road trips were like when they were younger and she knew for a fact that Owen hated road trips. They used to fight so much that their parents would threaten to leave them at a gas station. So Megan only agreed to a road trip with him again because she knew he needed to go with her to make sure she was alright and that everything was in order in LA. And so she didn’t mind him tagging along because she thought everything was fine.

Megan’s son Farouk and Riggs had gone ahead to LA to get everything set up and Riggs was, unfortunately, missing out on the signals Farouk was giving. The young boy had been apprehensive about starting over in a new place and going to school the first time. But Riggs thought he had convinced Farouk that school wouldn’t be so bad. He said Farouk would meet kids his own age and that it would help him adapt. So Riggs had thought that was all he needed to say and that everything would be better, but Farouk hadn’t wanted things to change.

Farouk missed it just being him and his mom. Megan had always been the one to handle his education and so he couldn’t understand why that had to change. But, again, Riggs missed the signs and he didn’t realize Farouk how anxious Farouk was becoming with all these new changes until he looked up from his phone and couldn’t find the little boy. Farouk hadn’t answered him when he called out and he hadn’t been able to find him in the house. So Riggs was freaking out about losing him and was checking outside when he found Farouk at the food truck.

The kid had wanted to get food for them because he saw how busy Riggs was and had wanted to help. But all the food choices had been stumped Farouk and so that too had made him apprehensive about the move. He wasn’t used to living in cities or being given the chance to make so many decisions. So Farouk had gotten scared and Riggs had had to help him calm himself though what they needed was Megan. Megan and Owen had enjoyed themselves on the road trip at first and they had a couple of laughs. And so things didn’t become tense until they went to the amusement park.

There had been an amusement park their parents used to take them to when they were younger and so walking down memory lane had been fun for them right up to the point Owen tried to convince her not to move. But Megan had grown up with Owen as an older brother and she knew that he wasn’t going to give things a rest unless she agreed to do what he wanted. That’s the way he’s always been and Megan was tired of Owen trying to control her life. So she confronted him about that strat she deserved and that he got in the way of.

Owen had denied he tanked that opportunity for her ten years ago however it hadn’t been enough to convince Megan back then and it still wasn’t enough. She knew he did it and so they got into that fight they couldn’t have because she had gotten kidnapped. Megan had demanded Owen tell her the truth and eventually he admitted that he had tanked her chances. He said he tanked her recommendation because she had been childish and impulsive much like how she was now. Owen thought the movie was silly. He said she was leaving behind her support system just to go live on the beach. But Owen didn’t stop there.

Owen had also thought she was being impulsive to move in with Riggs and start a family with him after Riggs cheated on her. But Megan thought Owen was a hypocrite because he cheated on his first wife and whatever he had with Teddy was in its own category. So Megan called her brother a judgmental ass and, to clear up few things, she also told Owen that she had cheated first. The day she had gotten on that chopper, she had gotten into a nasty fight with Riggs because he had asked for the ring back and she thought it was because she cheated.

But Megan had tried to apologize for cheating on him when he revealed that he cheated as well and that the ring he gave her hadn’t been his to give. It had belonged to Felicia Phillips and Megan had merely come across it thinking it was her. So Riggs panicked and he proposed to her with someone else’s ring, but he later told her that he still wanted to marry her and Megan had just been so angry that she had asked Owen to get her on that chopper that day because she hadn’t wanted to ride back with Riggs.

So Megan had spent the past ten years figuring out what was actually important in life and that all she wanted now was to be happy. She wanted a family with Riggs and she wanted to live on the beach because she had happy memories of it and wanted to hold on to that. But Megan also told her brother that people weren’t perfect and that sometimes they needed to let go of certain ideas. And so Owen finally let up, he realized his sister deserved to live her own life the way she wants it and that he needed to return to Seattle.

Owen knew he had to go back because he had to tell Amelia that they weren’t happy and it turns she felt the same. They had gotten married when her decisions had been compromised and so they didn’t really know each other. But breaking up hadn’t been hard. Amelia had told Owen that it was ok and the two seem like they’re going to remain friends.