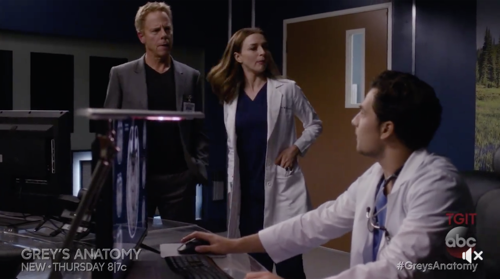 The show opens with Amelia clicking thru the slides showing her brain tumor. Luka asks her what the plan is. It has been over a week and he thinks they should tell someone. She reminds him of HIPPA requirements and tells him to keep his mouth shut. Meredith tells her daughter they are the only two people in the house who do their part in keeping it clean. Avery checks Megan’s stomach and the transplanted skin is healing nice. She is ready to get back to Iraq but Owen asks her to slow down. She needs physical therapy. Megan gets a call from her son and tells him she will be home soon.

Miranda is anxious about her upcoming inspection. Nathan asks Meredith how Megan is doing and she tells him she can’t discuss a patient and he will have to talk to the family. The team of doctors reviews a new patient with a 24 inch blood clot and they all fight to list the possible negative side effects. Meredith will perform the surgery. Arizona and tells April the details of her new sex life but April ditches her. Miranda calls all the department heads together to meet with Dr. Avery. He is not happy with the amount of money that has been spent fixing the damage caused by the fire.

Amelia calls in the head of neurology at Hopkins to review her brain scan. He insists that she stop practicing immediately. The tumor is compromising her planning, decision making and judgement. He tells her she is not of sound mind and has not been for years. Miranda meets with Dr. Avery and he continues to be grumpy. Meredith is also grumpy. Amelia tells Richard about her tumor and that she doesn’t want Owen or Meredith to know. Her doctor says the only way he will treat her is if she stops practicing medicine immediately. He thinks she has performed several questionable operations and may have be the cause of one patient now being blind.
Ben takes over the care of a woman who is loudly in labor. He is not happy that Arizona is too busy to provide her care. Alex and Jo make out in the elevator. Alex then gets a case of a boy he fell out of a hot air balloon. Owen complains of his problems to Megan but she has no patience for his problems considering all of hers. Luca calls Maggie into his office where Amelia’s MRI results are prominently displayed and tries to get her to see them but she is clueless.

Meredith confides in the patient with the large blood clot who is also a psychiatrist on staff. She needs his advice regarding her love life. Amelia undergoes another MRI and Luca tells Richard that she is consulting on cases but not actually seeing patients but did try to schedule a surgery but he stopped her. The boy who crashed the hot air balloon while asking a girl to the homecoming dance is going to be fine but the girl he asked doesn’t seem to want to go to the dance with him. Richard shares his old MRI showing he had a tumor many years ago and he is fine now. She makes fun of him because his tumor was so small.

Meredith confronts Nathan regarding his plans for the treatment of the psychiatrist. Maggie comes to his rescue. Meredith goes to her psychiatrist to try to figure out why she wants to resort to physical violence with Nathan. He says the surgery may kill him but he really wants to work with her to figure out her problems with now. Arizona and Richard watch Miranda and Dr. Avery continue to fight.

Ben’s patient still has not progressed with her labor and she is allergic to all of the drugs that could help her along. Arizona and Luca’s sister suggest that an orgasm would release nature Pitocin that could help her labor along. Ben is very uncomfortable. Amelia begins to become manic and Richard tries to intervene. Alex has to perform minor surgery on the hot air balloon boy. Richard tells Amelia that her mortality rate is only .09% while Derik’s was 1.9%. She has not been hurting people but she needs to tell her loved ones what is happening. Meredith and the psychiatrist have a good session.

Dr. Avery tells Miranda that he has decided to pull the foundations funding but Miranda convinces him to change his mind. He does however say that she is fired. Megan and Owen argue about their relationships. April tries to convince the high school girl to say yes to the homecoming proposal. Arizona’s patient goes into active labor. Amelia finally tells Maggie about her tumor and asks her to help her tell Owen. She also tells Maggie she has to tell Meredith. She just can’t. They cry together. Lisa tells Miranda she will work to get her job back. But she returns to find Dr. Avery is dead. Miranda keeps her job.

The psychiatrist makes it thru surgery and Meredith gives him his wedding ring back. Nathan and Meredith talk and she convinces him to fight for Megan. Ben comforts Miranda about her day with Dr. Avery. Jo asks Alex to move back in with her. Balloon boy and his girl decide to go to the homecoming dance together. Amelia tells Owen about her tumor. Maggie tells Meredith. Amelia gets ready for her surgery with her loved ones by her side.