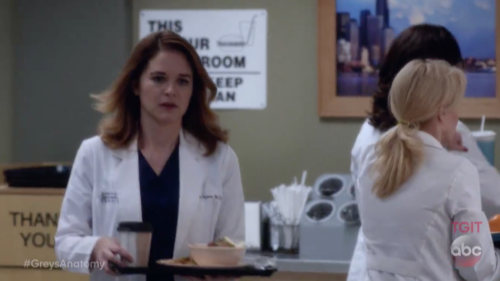 Tonight on ABC their hit drama Grey’s Anatomy returns with all-new Thursday, February 16, 2017, season 13 episode 13 and we have your Grey’s Anatomy recap below. On tonight’s season 13 episode 12 “It Only Gets Much Worse,” of Grey’s Anatomy as per the ABC synopsis, “Eliza’s (Marika Dominczyk) new phase of teaching begins and the residents look forward to it, but trouble arises when they wind up stuck in the middle of bickering attendings. Meanwhile, April (Sarah Drew) transitions to her new role at the hospital, and her first day is difficult.”

The show begins with April running everything she has planned to run the department by Miranda which is not necessary. Catherine and Robert argue because she told Miranda they were having problems. April begins telling the staff what they need to do for the day but everyone questions her decisions and asks where Meredith is. They are surprised to hear that April is in charge while Meredith is out on suspension. All of the attendings can’t believe that April accepted the offer to take Meredith’s position while she is gone. The residents are excited that the get to handle a surgery from start to finish and are jealous of Stephanie who completed the first one.

April tells Robert that Ben will be in charge of his next surgery. Robert can help but only if asked. Robert is angry and says no but April begs and he finally agrees. Stephanie is disappointed to hear that her patient died before she was able to have surgery. She and Jo head to the ER to troll for a new patient. Jackson tells Robert that they need to tell Catherine that April being in charge is a horrible plan but Robert says it was her idea.

Ben approaches Robert about the upcoming surgery but he walks away. Jo and Stephanie take a case away from Arizona in the ER and she is not impressed. They can’t hide their excitement when they realize the patient will need surgery. Ben complains to Miranda about having to work with Robert. She offers to talk to him but Ben says no. He is already being teased enough about their relationship.

April and Maggie argue while performing surgery on one of Meredith’s patients as the patient goes into cardiac arrest. They are able to stabilize the patient but can’t complete the surgery.

Miranda scrubs into Ben’s surgery which anger’s Robert. Maggie yells at April for taking the position and calls her traitor. Ben does well under Robert’s guidance but Robert implies Miranda is trying to push him out. The attendings plot about how to get April out but can’t agree on how to do it. Miranda and Robert argue as Ben finishes up the surgery.

Jo and Eliza argue about Stephanie taking the lead on a pediatric surgery. Jo insists on observing the surgery. Stephanie does a great job explaining the surgery to the patient much to Jo’s chagrin. Meredith’s patient develops complications and has to have another surgery. She blames April as she is wheeled to the OR.

April tells Maggie she is not needed in the OR but Maggie says it is her patient. April has to order Maggie out of the OR. Jo calls April “badass”. Stephanie’s patient’s blood pressure starts to crash and they work feverishly to save him but he dies.

Catherine tries to talk to Robert but he tells her she has turned Miranda against him and leaves. April and Jackson argue about her new position and he calls her an opportunist. April can’t believe Jackson isn’t supporting her. She tells him she earned the job because she is good not because of his mother.

Stephanie asks if she did something wrong but Eliza runs off. Jo finds Eliza and tells her she had to support Stephanie or she may quit. They agree to tell the parents together that their son has died. April successfully stabilizes Meredith’s patient and completes the surgery to remove the cancer.

Stephanie goes to Robert to figure out why her patient died. He tries to offer her support but she is still devastated. They go to tell his parents and reach them before Jo and Eliza. Catherine offers April support and they go out to celebrate. Ben and Miranda arrive home and fight about April’s position.