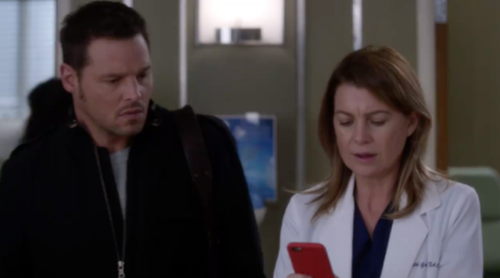 Tonight on ABC their hit drama Grey’s Anatomy returns with all-new Thursday, February 2, 2017, season 13 episode 11 and we have your Grey’s Anatomy recap below. On tonight’s episode, in the Winter Premiere Season 13 episode 11 “Jukebox Hero),” of Grey’s Anatomy as per the ABC synopsis, “Eliza (Marika Dominczyk) begins her first day at the hospital, and it won’t be a smooth ride for her thanks to Richard (James Pickens Jr.) and the attendings. Meanwhile, Meredith (Ellen Pompeo) attempts to locate Alex.”

Meredith hadn’t wanted Alex to go to prison. She hadn’t that thought it would be fair if he was sentenced and she also hadn’t wanted him to spend years for something he had instantly regretted however Alex had told Meredith that he was going to take a plea agreement. He had told his best friend that he couldn’t risk putting Jo through a trial and that he had to take the plea agreement. But Meredith hadn’t cared about Jo or what Jo was going through. She had just cared about Alex and so she had tried to convince not to go through with ruining his life.

Meredith had gotten upset with him and she had even tried to reason with him. However, Alex went to the courtroom anyways and the last thing he had heard before he met with the DA had been the message Meredith left on his voicemail. So Alex had gotten the chance to hear that it was just the two of them now out of the original five and that he was her person yet Meredith had never heard back from Alex and so she spent the next morning looking up his court case to see if he had gone ahead with accepting the prison time.

Yet, what Meredith and Maggie found out was that the case had been listed as permanently postponed and that there wasn’t anything else to determine what that exactly meant. So Meredith had assumed the worst because she thought the only way the case would suddenly be over was if Alex had agreed to take the plea and so that had her freaking out. Meredith wanted to know how long he was sentenced, which prison he was going to be sentenced to, and whether or bit he needed anything.

So Meredith was slowing driving herself insane with all the questions she had swimming around in her head and that had rubbed off on Maggie. Maggie had tried getting her sister answers by calling every lockup she could think of and surprisingly she also couldn’t find Alex. And it was almost like he had disappeared into thin air with no one knowing anything. Though Alex hadn’t been the only one that vanished because Amelia was also missing. Amelia had written Owen a letter that said she needed time to think, but she didn’t say where she was going or that she had taken time off of work.

Owen therefore didn’t know who to turn to. He had tried asking around at Meredith’s to see if she or Maggie had seen his wife however he hadn’t had much luck there either and he like everyone else had to deal with a testy Jo at work that didn’t like to be asked questions. Jo had taken the news about Alex well and she had tried making everyone around her feel just as bad as she did. But Ben was kind to her because he always asked her if she ok no matter how much she tried push him along everyone else away. So that was just the type of man that Ben was.

Ben had later tried to be kind to Eliza Minnick as well. He knew that Minnick was new at the hospital and so he had tried to make her feel comfortable. However, Ben was one of the few that proved to be willing to give Minnick a chance. The others had begun to ostracize Minnick the second she walked in because they found out that she was going to be taking Richard’s job and so they all tried to find ways with working around Minnick. They changed their surgery hours and sometimes ignored Minnick out of pure spite. Like when it came to teaching.

The hospital was a teaching hospital though studies on some of their former residents had showed that those that supposedly fail at Grey Sloan would magically excel elsewhere. So it wasn’t the students and it had in fact been the teachers as well as the man in charge of the residency program. Which was Minnick was brought in and hired. Minnick knew how to help a hospital that struggled and she had actually agreed to stay on at Grey Sloan despite several other offers. Yet, Richard didn’t want to be the bigger person by stepping aside.

Richard had thought he had been wronged and he hadn’t cared about what Bailey had said on the matter. Though to fed the frenzy had been wrong of him. Richard had people pushing Minnick aside as a way to prove their loyalty to him and he went around saying that they needed to band together because the hospital was under attack. So Richard had done everything possible to make Minnick leave her job and Minnick refused to take it. She continued trying to be there if anyone needed her and she would have been just fine fighting her own battles.

But Bailey had found out what’s been happening to Minnick and she called an emergency meeting. Bailey was the Chief at the hospital and she refused to be undermined. So she called the emergency meeting and then no one bothered to show up. The doctors had all allegedly been busy and it had so Richard had been the only one to eventually saunter in because he had wanted to talk to Bailey. He had told her that people were upset at the hospital and that no one wanted change they didn’t ask for.

So Bailey could have told Richard that it had been Catherine that had made the suggestion of overhauling the program yet she hadn’t because that was the better person does. However, Minnick had thought she had finally gotten some good news. Minnick had found out that Arizona had let an intern carrying out some procedures without her and she had thought that someone was finally jumping on board with her approach when in actuality Arizona hadn’t been able to be there for child patient of hers because she had been so focused on the mother.

Arizona had told a patient that was in labor in a taxicab that she should recline her seat and put her feet up on the dashboard. Yet, the cab had gotten hit by the father’s car because he had also been racing to be at the hospital for the birth. So the father and Arizona blamed herself though the one good thing about the end of the day was that Meredith found Alex sleeping in her room. He had apparently been there all day and hadn’t gone to jail.