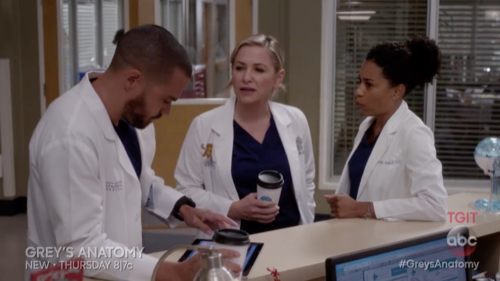 Tonight on ABC their hit drama Grey’s Anatomy returns with all-new Thursday, February 9, 2017, season 13 episode 12 and we have your Grey’s Anatomy recap below. On tonight’s season 13 episode 12 “None of Your Business,” of Grey’s Anatomy as per the ABC synopsis, “Maggie’s (Kelly McCreary) mom visits her unexpectedly at work. Meanwhile, Bailey (Chandra Wilson) must make a tough call when one attending defies orders by not working with Eliza; (Marika Dominczyk)  and Stephanie gets swept up in Owen and Amelia’s personal problems.”

Alex wasn’t in prison! He had gone to the District Attorney’s Office to talk about accepting a plea however DeLuca had walked in before Alex could say anything. But DeLuca had walked in on that meeting because he had wanted to stop Alex from accepting the plea. He had apparently found out from Ben that Alex was going to jail and he had wanted to stop it. So he raced down to the DA and he had tried to drop the charges when it turns out that dropping the charges wasn’t actually going to stop the case from going ahead.

However, Deluca hadn’t known that and so he had to go with a different option. He told the DA that he would go on the stand and say that he had started the fight. So the case was dropped because the DA couldn’t go ahead with a case when the victim/main witness was going to take the blame for what happened to him yet DeLuca had been asked why he was doing what he did and he hadn’t answered anyone. Not even Alex when he wanted to know why DeLuca had suddenly changed from the man that had wanted to lock him up.

So it became a mystery around the hospital as to why DeLuca dropped the charges and he had refused to tell anyone. He said that is was a personal decision and that he wished to keep it personal. Yet, Ben had been talking to his wife about what was the latest piece of news and he had been the one to tell her that Alex got off as well as why. Ben had said that DeLuca had dropped the charges because of Jo and he had also mocked his wife when she hadn’t gotten why DeLuca would do something for Joe.

Bailey got it later on, though. She had just needed a minute to think it over and eventually she realized that DeLuca was interested in Jo. But Jo wasn’t quite interested in DeLuca. Jo had worked back to back shifts to ignore what would happen with Alex and so she has been avoiding DeLuca because she hadn’t known what happened or what it would mean for her. So Jo had found out about what happened when her friends came over to tell her all the latest gossip. Like how the Minnick situation had taken over the hospital and what would mean for all the attendees including Alex.

Alex had gotten his job back and he had nearly risked it again by arguing with Bailey about what was happening to Richard. Baily it seems had taken some extremes to get her point across and one of them had been to suspend Meredith because Meredith had refused to have Minnick in the OR with her. Though Meredith’s suspension had concerned everyone at the hospital. They had thought that Meredith was untouchable and the fact that she wasn’t had showed all of them that Bailey meant when she brought Minnick on board. And as for Alex, he was just concerned for his friends.

Alex hadn’t been gone that long, but it was if everything had changed in his absence and that the administration no longer believed Richard could guide the program. Yet, Bailey had told Alex that she wasn’t backing down and she had kicked Alex out of office before she had to suspend him too. So Bailey was pushing back against the attendees that had ignored her requests as well as her meetings and she was telling everyone that means business. Even if Minnick didn’t want her to and had explicitly asked that she stop!

Minnick knew that she was fighting an uphill battle and being the reason for why attendees were getting fired was merely going to make that worse. So Minnick had tried to talk Baily about easing up and the conversation had given her a pretty good feeling that Bailey might fire her just to make things easier. But it was Bailey’s job to steer the hospital in the right direction and unfortunately both she and Cather didn’t believe that wasn’t with Richard while it was different with Minnick. Minnick had engaged the residents and she had them doing more than being viewers.

However, the attendees didn’t actually care about the residents. They were some that were good teachers and on the other hand there were some that struggled with teaching to the younger doctors while someone like Amelia was using her resident’s apartment to hide out form her own husband. With that same husband occasionally stopping by trying to convince his wife to work on their marriage. So the residents really didn’t need Richard who was more of a friend to the attendees and couldn’t really stick up for the residents though no one on Richard’s side had thought about it in those terms until Catherine talked to April.

Catherine had told April that she and the others were being selfish because they were throwing a tantrum believing they would get their way. So Catherine had also mentioned that April should knock it off and Catherine wasn’t the only one dishing out some hard truths. Minnick for that matter had told Arizona “screw you” because Arizona had been pretty interested in her until Richard suddenly became an obstacle for that as well. Though in a funny twist, April was later appointed interim Chief of General Surgery which was Meredith’s job.

So Meredith did get the message that Bailey was sending. She had apparently found out she was in fact replaceable at the hospital. But Meredith hadn’t sweated. She had shrugged off the news like nothing had happened and listened to Maggie complain about her mother because her mother had come to Seattle for a visit. Maggie’s mom had said she wanted to see Jackson seeing as she heard he was one of the best plastic surgeon however she didn’t tell her daughter that she wanted to see someone about a rash or that Jackson diagnosed it as part of her breast cancer.

And so if Maggie had been a little bit nicer to her mom whose only fault was that she divorced Maggie’s dad to go live in Hawaii then maybe Maggie would have let her childhood grudges go.