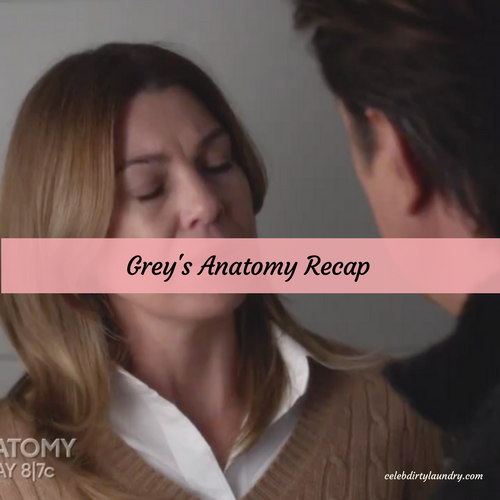 Meredith and Riggs were both attending the same conference when they found themselves on the same plane. But Riggs unfortunately was the only one that thought their weekend away was fated because Meredith was still angry at him. She remembered how frustrated he was about Maggie and how he wanted Maggie to quickly get better just so he could have some alone time with her however that didn’t stop Riggs from continuing to try. He said that there weren’t any more distractions she could use with them both going away. So Riggs decided to take a chance and he followed Meredith to the bathroom.

However, Meredith later told him “no” that she hadn’t been sending him any signals with her eyes and that they didn’t have a thing to begin with. So Riggs dared her to move out of the way and let him leave the bathroom yet she couldn’t. Meredith had tried to deny it and she had even said that whatever they had was over only she hadn’t meant it. She was still into him and so she told him that what happened in the bathroom stayed in the bathroom. And so the two had sex and they hadn’t felt bad about it in the least. They had felt a deep attraction for each other and they had acted on it which thankfully happened right before the plane experienced some turbulence.

So the turbulence changed everything. People had still be in the aisle and they had gotten thrown around in the chaos, but as it bad as it had been on the people that truly were injured during the turbulence it had been equally difficult on the doctors. There had been just Meredith and Riggs to help everyone and the only person that could truly assist had been a dentist. Yet, most of the injuries were easily treatable. There had been bangs on the head, arms, and the stewardess had needed to have her wrist splinted so all in all the doctors had first had it easy. And therefore, they didn’t have a real problem on their hands until one flyer had started to suffer a brain bleed.

The brain bleed needed to be quickly seen to and so Meredith had practically begged the pilot to land because of the medical emergency. But the pilot couldn’t. She said that they were flying above as well as below two separate storms and that it would be dangerous to land. So Meredith had thought their next best option was to perform brain surgery on the plane yet Riggs was naturally against the idea. He said that there were too many risks and that they shouldn’t put their patient in further jeopardy. And so Meredith decided to ignore him. She knew that Max needed to have the pressure relieved off his brain so she went ahead with brain surgery onboard a turbulent flight.

Yet, Meredith needed something to puncture Max’s skull and the only thing she could find was one mere needle. So Meredith had to repeatedly jam the needle into Max’s head to create an opening and then she had to keep the needle in place while she removed the pressure though that it was a bit hard on a shaky plane and eventually Meredith didn’t even have Riggs to help because he had to check on another patient that couldn’t breathe so Meredith had to rely on people she didn’t suspect. Like the dentist, the stewardess, and the young woman that had simply been sitting next to her and Riggs before everything went to hell.

So Meredith learned to make do and the separation between her and Riggs had been good for her. She had needed Riggs’s help a few times, but things had been complicated between them because Riggs had asked her to take a chance on him and not just in the bathroom while she had said she couldn’t because she was married. Though the fact that Meredith still thought of herself as married to Derek had proved something to Riggs. It had proved that Meredith had come up with excuses for why they couldn’t be together when the truth was that she was scared. Scared to move on from Derek and scared to see where things might go with Riggs. And so Riggs challenged her.

He made Meredith confront her fears and so she lashed out at him because that was easier than admitting to anything else. But the momentary separation on the flight allowed them to both to breathe. So Riggs focused on his patient. The same guy that had been making a nuisance of himself and had also gotten yelled at by Meredith for trying to shame a mother and her child. And so he was memorable and a lot of other people onboard the flight had thought he was annoying though surprisingly they came through for him in the end. Someone onboard had heard that Riggs needed erectile dysfunction medication and so they happily provided it despite the embarrassment.

Though even with the drugs, Riggs had almost lost his patient and had been focusing on giving him chest compressions when Meredith finally asked for help. She said that she needed him to help get more of the blood off the brain and that he would be at least helping someone rather than focusing on the patient that lost a pulse however Riggs told Meredith that she could handle things on her end without his help because he truly believed that. He had seen Meredith act confident and professional so he didn’t doubt that she could continue with what she was doing or find another way if she needed to.

So Riggs kept focusing on his own patient until he ultimately got a heartbeat and Meredith got creative. She had used someone’s nail clipper to widen the opening she had made and then she had put a straw in Max’s skull which helped speed along the process. However, right as everything was coming together, the pilot had announced that she was landing and that they needed to take their seats. And so Meredith was down to a dentist when the plane finally and quite bumpily landed on the tarmac.

And regardless of the other offer he had received from the stewardess, Riggs told Meredith that he liked her and she ultimately “leaned” into seeing where things go while they were on vacation.