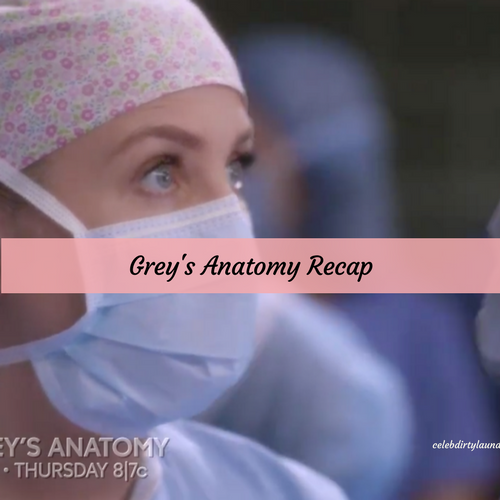 Maggie returned to work. She thought that she was ready and so she convinced everyone that she was fine however she also thought she was ready to perform surgery again. But the others didn’t feel comfortable about that. They thought that Maggie was still a little bit raw after losing her mother and that surgery much less risky surgery on a fetal patient should be something she works her way up to. So Owen had been forced to intervene. He knew the parents involved and they were both great friends of his.

However, Maggie had hated that Owen called her professionalism into question and that he had talked to Arizona and then later Meredith about her. She said that she was the best in her field and that she could do the surgery. So she didn’t understand why Owen had everyone panicking about her or why he had talked to the parents about her state of mind yet Maggie spoke to Jenna and Leo herself about their concerns and she was honest with them. She admitted her mother did pass away recently and then she said she was the head of her department for a reason.

So Leo and Jenna ultimately agreed to let Maggie do the surgery. They had been reassured and so didn’t have a problem with moving forward though Owen still had his doubts so he convinced Meredith and Amelia to talk to Maggie because he thought they could do something. Yet, Meredith and Amelia chose to talk to Maggie and see if she was still alright so that made Maggie doubt herself. She thought that if her own sisters didn’t believe they could do the job that maybe she couldn’t the job. And so Maggie hated gotten angry at them.

Maggie had wondered why no one thought she could do the surgery and she went into the OR with Meredith and Amelia’s doubtful voices in her head. Though Maggie tried not to let all of it get to her. She ignored the many nurses in the operating room that were just waiting around for her to make a mistake and she didn’t look up to the observation deck because she didn’t want to see everyone’s worried faces watching her. So Maggie performed the surgery and it was success, but the baby had had a moment that didn’t look good and everyone had tried to push Riggs into the room.

Except Riggs wouldn’t go because he knew that there was no reason for it and that Maggie could handle herself. So he told the others to give Maggie her space and, like he suspected, Maggie knew what she was doing. She was giving the patient a minute to adjust after a piece of her had been taken out. But once the surgery was done, Maggie lost all of her composure and she took it out on Jackson. Jackson had been Diane’s doctor so Maggie had wanted to know why he hadn’t done more for her mother before Diane died.

However, Maggie fell apart after she got into it with Jackson. She left work early and had gone home to cry. So Meredith decided to cancel her dinner plans with Riggs because she said that Maggie still needed her yet he said that Maggie was going to start living with her grief. He knew in his case as well as Meredith’s that grief comes and goes so he didn’t think that Maggie was ever going to get better if Meredith coddled her. And Meredith had thought that was pretty insensitive of Riggs so she slammed the door in his face and went back in to dance it out with Maggie.

Maggie had needed something to make her smile and dancing it out had helped. Yet, Jackson later stopped by the house to give something to Maggie. It was apparently Diane’s files and it said that Diane had been diagnosed months before she sought treatment. So Maggie had asked what was her mother doing in all of that time and it turns out Jackson had the answers to that too. Jackson had had Diane’s vacation photos and it showed that Diane lived to the fullest with trips to Paris and skydiving. And that meant Diane knew she was dying and merely had given Maggie time to adjust.

So that more than anything had helped Maggie come to terms with what happened. She knew that her mother loved her and that Diane got to enjoy what was left of her life, but she’s still going to be fragile for a while and so she needs time. Though Riggs was left feeling frustrated and it didn’t help that he had talked to Arizona about being interesting in Meredith because Arizona had been surprised by that. She said that she didn’t think Meredith would date again what with Derek being everything to her. And so if it wasn’t the sister then it was Derek.

And while everyone had been focused on whether or not Maggie was ready to go back to work, the hospital had had a little problem when one of their interns came down with intestinal TB because TB could be highly contagious. So both Stephanie and DeLuca who had acted as Cross’s doctors had freaked out a little when April told them about Cross’s condition however April saw to the patient while they ran out of the room. But despite leaving the scene as quickly as possible, Stephanie and DeLuca still need to be frequently tested over the next oncoming months because TB might not show up in their system for a while.