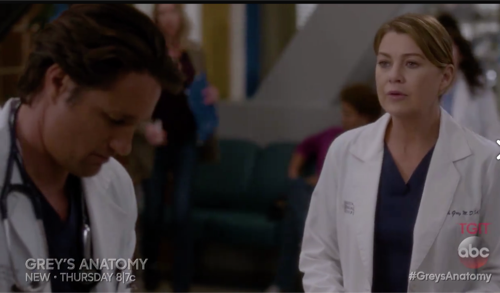 Owen had a couple of unexpected visitors. Two members of the Army Human Resources division came to his door on tonight’s episode of ‘Grey’s Anatomy’ and they had had word about his sister Meghan. But the second the second they came to his door, Owen just shut down. He went to a dark part of his mind and simply allowed himself to get lost there because he didn’t want to think about what was happening or about what had happened to his sister. So Owen should have taken some time for himself and stayed home however he went to the hospital like it was any other day and it wasn’t.

Owen had gone through a trauma and he hadn’t been ready to go back to work. However, he pretended that he could do it and had later gotten rough with a baby. The baby had come in choking and so April had wanted to follow protocol to see what was preventing the baby’s airways though Owen chose to go right up to the child and pounded on its back until she spat up a penny that she must have swallowed when the parents weren’t looking. So Owen could have said something reassuring afterwards to let them understand how serious the incident was and instead he chose to play the blame game.

Owen told the parents that next time they should just call for the ambulance rather than waste precious time and that now the baby needed a scan to detect whether or not the child had been deprived of oxygen for too long. Though despite Owen scaring the parents, both Arizona and Amelia had come by to check on the baby and they had reassured the couple by saying they couldn’t detect anything that was off yet they had also said that they had to keep the baby overnight to keep an eye out. So Owen didn’t have to say all that he did and it wasn’t surprising that the parents had explicitly asked that they be allowed to speak to the doctor that pounded on their daughter.

Yet, that hadn’t sounded like Owen to Amelia. Amelia knew that Owen was usually more professional than that and so she had tried to talk to him, but he had blown her off. He hadn’t been ready then to talk about his feelings and Amelia had just thought that he was giving the silent treatment. So she was going to complain about that to Meredith when Meredith’s own drama took over because she invited Riggs to dinner. As in dinner with her kids who have never met him before or anyone else for that matter that their mother happened to be dating so the dinner was huge. And Meredith wasn’t sure if she had pushed things too soon.

So Amelia calmed Meredith down. She told her that Derek was no longer in the picture and that Maggie was going to be fine so Meredith didn’t have a single thing to worry about. But Amelia later remembered that seemed off with Owen when she saw him sort of explode with the happy parents that had wanted to tell him “thank you” for what he did for them and therefore she refused to let Owen push her away when she went to go talk to him again. And thankfully, he had been ready to talk. He told her that he had been notified about his sister and so Amelia thought they found Megan’s body however Owen eventually said his sister was still alive.

She had apparently was in a rebel held house when the others had been forced to abandoned the place though she was fine now and was being held in Germany. However, Owen hadn’t known what to do. He felt guilty about moving on with his life while his sister was being held against her will and so he initially hadn’t wanted to believe that the woman in Germany was his sister. He told Amelia that the hospital could have made a mistake and that he didn’t want to say or do anything until he knew for sure. So Amelia made a call to the hospital and she got the confirmation he needed that it was Megan because a friend of theirs at the hospital identified her.

Though with the confirmation, Amelia took charge. She had asked that Megan be transferred to their hospital and she had even called a renowned doctor to help Owen adjust to his sister suddenly being alive. So Amelia was doing her best to help Owen and Megan yet the couple had forgotten about Riggs. Riggs was Megan’s husband and, while they had been going through a separation around the time she disappeared, they hadn’t gotten a divorce. So Megan being alive was causing more than a just minor breakdown for Owen. It was also bound to affect Riggs and the relatively new relationship he has with Meredith.

So Meredith went home expecting to make a nice dinner for Riggs when she came across both Amelia and Owen at the house, but while she was in some for heartache, there was a much bigger scene at the hospital. The hospital had gone into lockdown after a rapist go loose and took Stephanie as his hostage. Yet, Stephanie had gotten into that situation because she had gotten personally attached to patient that claimed he had to see his girlfriend who was also in the car with him. And so she didn’t find out until much later that the his supposed girlfriend had been victim who drove her car off a cliff just to kill him.

And therefore Minnick had been right. She said that Stephanie was either too blunt or got too attached to her patients. However, Minnick had suggested that Stephanie go to therapy and Stephanie had gotten out of that by having Richard sign off on her returning to active duty. So Stephanie was kicking herself for getting fooled by Keith and had eventually gotten stuck in a corridor with him though when they found out they had gotten stuck with a child that had wandered off – that had changed everything. He had wanted to start a fire to open the doors and he had wanted to take the little girl as a shield only Stephanie knew she couldn’t let that happen. Stephanie chose to set Keith on fire and she had tried to take cover with Erin.