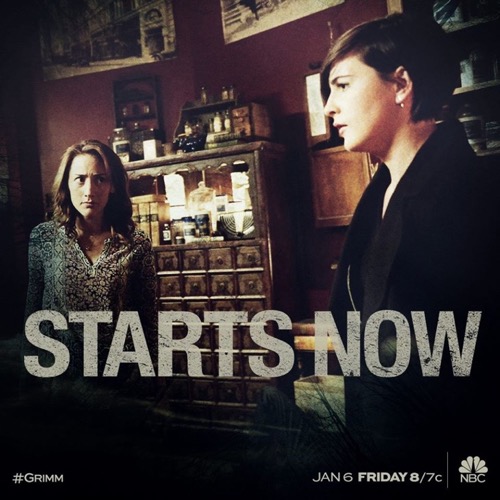 Grimm returns to NBC tonight with a brand new Friday, January 6,  season 6 premiere called “Fugitive,” and we have your weekly Grimm recap below. On tonight’s Grim season 6 episode 1 premiere as per the NBC synopsis, “In the Season 6 premiere, a shoot-to-kill manhunt is ordered by Capt. Renard,  (Sasha Roiz) who’s hell-bent on eliminating Nick (David Giuntoli) once and for all after the loft massacre. Meanwhile, Monroe (Silas Weir Mitchell) and Rosalee (Bree Turner) have mixed feelings about staying in Portland now that their family is expanding; and Eve deals with the side effects of the mysterious stick’s healing power.”

Diana has been a naughty little girl. The young witch was apparently coming into her powers and it seems she was manipulating others into doing what she wanted however to do that she was also stripping them of their free will. So Diana is powerful and she had saved Nick’s life by eventually intervening before he could be killed. But why did she do it? Diana had proved that she had a will of her own and that no could take control over her so she why did she save Nick’s life? And in the meantime Nick’s friends were frankly in shock that he was still alive.

The others had gone down into the tunnels like Nick had asked, but they hadn’t felt comfortable about leaving and were returning to the scene to save their friend when he suddenly just showed up. Nick had had several gunshot wounds on his chest and still he was walking around as if nothing was wrong. Yet, that didn’t explain how he had survived tens of assassins or why Bonaparte was dead? So of course Nick’s friends were confused. They didn’t know what happened and for some parts neither did Nick.

However, Wu had had an import question when he saw his friend again. Wu had asked Nick if he was a ghost and Nick had said that “he hoped not”. So it had taken Nick some time to get around to the truth or least what he knew yet he eventually told his friends about the stick he had found with Monroe. Nick and Monroe had found a stick in the Black Forrest that had been heavily protected and they didn’t know what it did until Nick had begun using it to heal himself and even Juliette. And so that’s how Juliette survived last season.

So this stick is powerful and it might actual be more than a healing stick. Juliette had later admitted to Trubel that she was feeling again and that had scared her. Juliette didn’t want to feel again because it had reminded her of how horrible she had been and all the pain she had endured. Though what Nick couldn’t explain was why Renard killed Bonaparte and that’s because he didn’t have the answers. Renard on the other hand had gone back to the compound and had a little conversation with Adalind.

Renard had suspected that either Adalind or Diana had something to do with Bonaparte’s death and why he had a hand in it. But Adalind swore she would never risk her children though she did admit that Diana had seen her bruises. Adalind had some bruising around her neck after Bonaparte had threatened her and Diana had seen them. So Adalind had explained to Diana that it hadn’t been daddy that hurt her and that it had been one daddy’s friends. And so Diana had merely listened to what her mother had said and had drawn her own conclusions.

Diana had killed Bonaparte because she thought he had been mean for hurting her mom. Yet, saving Nick had been sort of an afterthought. He had just gotten lucky with Diana and the little witch turned out to be much more powerful would have guessed. So Adalind had talked to her daughter about that and how the little girl chose to play with her voodoo dolls, but it was hard to discipline so powerful a child and neither of Diana’s parents had wanted to risk pushing the child too far. Even if she creating bigger and bigger problems for everyone.

Renard after all couldn’t admit that he killed Bonaparte. That would turn his allies against him and he would have been killed within a day. So Renard had to come up with a plausible excuse for why Bonaparte died and he chose to say that Nick had killed their leader. He had woken up several individuals to help get the word out and then he had pretended as if he was going to have Nick’s head for what he did to them. However, Renard was also using the police department to capture Nick. The police captain had claimed that Nick broke out of custody and so he used that.

Renard riled up the police and brought in the feds to execute a shoot to kill order however there were some on the force that didn’t feel comfortable with carrying out such an order because they remembered Nick as the cop rather than the fugitive. So Renard had people frequently in his ear urging caution and he chose not to listen even as they could see he was out of control. Renard had teams searching house by house and he was probably violating several laws. Though Renard had a problem as well.

Renard’s campaign manager Rachell Wood had been found dead in her apartment and his fingerprints were all over the place. So Renard was a suspect in Rachel’s death and there was nothing either Wu or Hank could do that would be fast enough to distract the captain. They hand fingerprints and DNA indicating that the captain and Rachel had had a personal relationship yet that didn’t matter with Renard right outside Bud’s shop ready to arrest Nick. Nick had his friends, but they weren’t any help. And that included Juliette/Eve.

Juliette had been captured in someone else’s death grip and that along with the stick meant there was no way to hide Nick in plain sight.