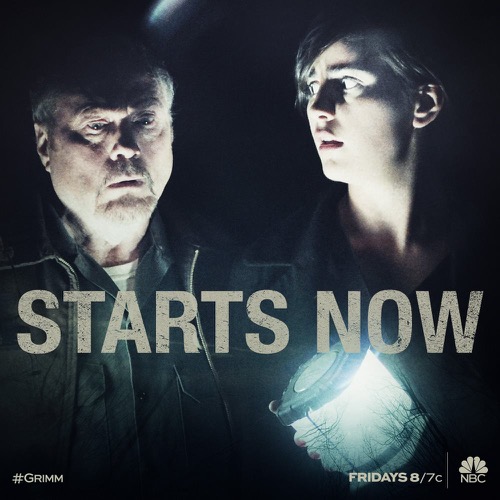 Grimm returns to NBC tonight with a brand new Friday, January 13,  season 6 episode 2 called “Trust Me Knot,” and we have your weekly Grimm recap below. On tonight’s Grim season 6 episode 1 premiere as per the NBC synopsis, “Nick (David Giuntoli) makes a pact with potentially deadly consequences; Hank and Wu think they have a way to stop Renard (Sasha Roiz) a phone call throws Adalind into the middle of everything; Diana demonstrates her power while in the care of Monroe (Silas Weir Mitchell) and Rosalee; and Eve and Trubel do some digging to figure out the mystery of the cloth found with the healing stick.”

Nick and his friends had been surrounded. Renard had known about Nick and Bus’s friendship so he had an entire task force trained on the location and unfortunately there had been no way to fight what they all assumed was coming however Nick hadn’t wanted his friends. He hadn’t wanted anyone to get hurt and he had been sure about that anything after he found out Rosalee was pregnant. But Nick’s plan to turn himself in had been gotten a little awry. The task force had crashed their way in Nick had said he was surrendering. So what had gone wrong with the plan had been what the cops found on Nick.

The cops had first had to check Nick for weapons before they could put the cuffs. However, they found the mysterious stick and its powers had knocked them all unconscious. So it didn’t really what that stick was. It had just given Nick the time he needed to escape and there had been nothing Renard could do about it. Renard had had to leave the scene before the task force could the enter the building because he had been arrested yet funnily enough it had been for a crime he didn’t do. Renard been arrested for Rachel Wood’s death and confessing that preteen witch of her daughter had actually been the one to kill Rachel wasn’t much of a defense.

Yet, Hank and Wu hadn’t arrested Renard because they believed he killed Rachell Wood. They had arrested him because they had wanted to buy Nick some time and thought getting Renard out of the way could help their friend. So Hank and Wu’s plan had worked. The two officers had been under suspicions already with their department so it wasn’t like they had anything to lose with making an enemy out of Renard though what they hadn’t looked so rash with all of the evidence in their corner. Renard was a good suspect. He had after all presented himself as a family man when he ran for Mayor and the fact he was sleeping with Rachel could be dangerous for him.

What if their relationship had been found out and he panicked? What if he tried to end things and she had attempted to blackmail him? Those were the type of questions that any detective would ask. So it was within the realm of possibility that he killed his mistress to protect his career as well as his family, but the fact was that the relationship could be proven and that Renard didn’t have an alibi for the night Rachel died. He had been murdering Bonaparte at the time so he couldn’t say that his alibi for murder had been a different murder. Though once he calmed down, he remembered that Adalind was a lawyer and that she could help him.

So Renard had called Adalind to represent him and she had been willing to do so however she wasn’t going to lie for him or risk committing perjury. Renard had apparently wanted Adalind to say that she was his alibi and that they had spent the whole night together. But she hadn’t wanted to risk going to jail if she had ever been found because she knew that she would lose her children and so Adalind reminded Renard that no one mattered to her more than her children. And so she left Renard to rot in jail knowing that there was no way he could convince anyone his daughter Diana had killed Rachel.

Which was funny because Adalind had been proven right. Hank and Wu refused to believe that anyone else could have killed Rachel and the nature of Rachel’s death was pretty hard for anyone to claim it was accidental. However, Renard had been ready to say whatever he needed to in order to get out of jail and so he later came to an agreement with Nick. Nick and Renard had met at his old loft and they had agreed to a Trust Knot ritual. The Trust Knot ritual was when two parties made an agreement and the first that broke it would die. So Renard had agreed to that knot because he knew that was the only way Nick was going to trust his word yet the agreement had been big.

Renard had agreed to taking the price off of Nick’s head in exchange for Adalind claiming to be his alibi on the night Rachel died. So Adalind did have a price and she had loved Nick enough to risk anything for him though Renard being the sneaky man that he is had come up with a backup plan. Renard had gotten his friend the judge to convene a grand jury in a hurry and then throw the case out like nothing ever happened. Yet, the agreement had made had in exchange for Adalind’s testimony and she had never gotten the chance to testify. And so the deal was off within hours after making it.

So Nick was still going to be hunted and he failed to leave town with Trubel when he had the chance, but the one good thing to come out of those hours he thought he could get his life back had been when he finally met Diana in person because she had deciphered the scroll for them.