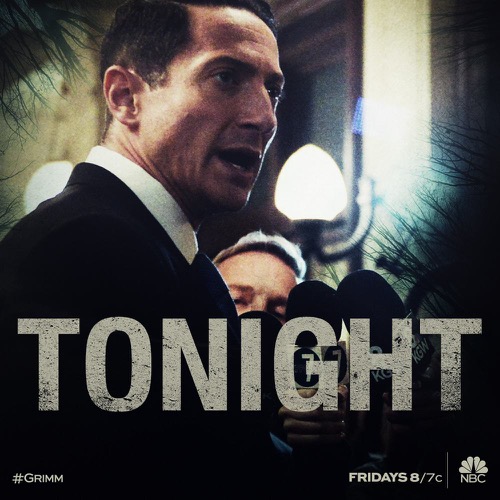 Grimm returns to NBC tonight with a brand new Friday, January 20, 2017, season 6 episode 3 called “Oh Captain My Captain,” and we have your weekly Grimm recap below. On tonight’s Grim season 6 episode 1 premiere as per the NBC synopsis, “Adalind (Silas Weir Mitchell) and Monroe (Silas Weir Mitchell)do everything in their power to see that Nick’s clever plan to get under Capt. Renard’s (Sasha Roiz) skin goes off beautifully. Meanwhile, Eve and Rosalee are under the gun to get their spell ready on time.”

The great plan had failed. Captain Renard had found a way out of the agreement he had made with Nick and so he wasn’t going to let Nick or any of his friends go free much less live happily ever after. But the plan that was supposed to keep Renard in check and stop Nick from being a fugitive hadn’t just affected the two men. It had also made an impact on Hank and Wu’s lives because they had been fired from the force. So no matter what the guys tried there simply didn’t seem a way from them to stop Renard from taking over the city and carrying out his own agenda however, Nick had later came up with a plan that he thought might work.

Nick and his friends had mostly tried to do things on the up and up yet Nick had apparently realized that they if they wanted to stop Renard then they had to get their hands dirty. However, his plan was something the others had a hard time accepting. Nick had thought that they could use a spell to make one of them look like Renard and stop him from becoming mayor. So both Hank and Wu had needed some convincing before they wanted to go ahead with such an idea. The guys had known that it would be risky with two Renards in the city and they thought the plan could easily fail if the true Renard figured out what they were doing.

Yet, Renard had been a little preoccupied lately. A former member of Renard’s campaign team had known that Renard was the last person to see Rachel Wood alive. So he had demanded money for his silence and man like Renard wasn’t going to accept that. He had said that he would pay and then he showed up at the other man’s apartment with reinforcements though there had been a problem afterward. Renard had unfortunately gotten blood all over himself as a result of being too close to the victim as he got rid of the blackmailer and so he had needed to go home. And that had almost ruined Nick’s plan.

Nick had pushed his friends into following his plan and he had also volunteered to be the one that changed into Renard. Though to make the spell and potion work for the transformation he had needed a piece of Renard’s hair. So Renard had almost caught Monroe and Adalind as they were gathering his hair and some clothing for Nick to wear after the transformation, but Adalind had gotten lucky. She had persuaded Renard to take a shower because there was blood in his hair and that had given Monroe to run for it. And so all that was left was to finish the potion and give it to Nick.

So Nick followed Eve/Juliette’s instructions however Nick as a grim hadn’t reacted well when his face had turned into a Hexenbiest. He had thought that something had gone wrong with the spell and he had been scarred for life. But all Nick had needed to do to appear was to calm down. He had been so agitated that he hadn’t realized that Wesen needed to control their emotions at all times and so Rosalee had talked him through his transition. She had him take deep breaths and clear his mind. And that had eventually worked because Nick had put away the Hexenbiest and had allowed Renard’s face to come through.

Nick had fully transformed into Renard and so he put his plan into action. He had gone on the seven o’clock news and has informed everyone that he would be stepping down as Mayor. Nick/Renard had said that he couldn’t walk away from the police department while he was needed as captain. And he have even cleared his own name. He had said that Nick Burndhart was working on a top secret mission and that he wasn’t actually a fugitive. However, the real Renard had seen what Nick did and he had flown into a rage. He had warned Adalind that she better not have been a part of what Nick did and then he had driven to the police station to try and clean up after Nick’s mess.

Yet, there was no undoing what Nick did because Nick had also given interviews to the waiting press. He had impersonated Renard so well that the press believed he was never going to run for another political office again. So Nick had trapped Renard. The real one had showed up at the station and he had tried to claim that it hadn’t been him that abdicated the office though naturally the press didn’t believe him. They had thought he was contradicting himself and that had been worrisome because Renard had needed his reputation.

It was Renard’s reputation that had gotten him so far and he couldn’t lose it. So Renard had contacted Nick and he had demanded to have his life back, but there was a problem with that because Nick couldn’t turn back. Nick’s face was stuck as Renard’s and so he had used that as a bargaining chip. Nick had showed up at a meeting with Renard and he had forced Renard into agreeing to let things go. He said that they could blame the north precinct on Bonaparte and greedy cops. Though Renard sill couldn’t accept the mayor’s office and had to stay on as captain while Nick returned as a detective.

So Renard had had to agree to the plan because he couldn’t afford two Renards in the city however Nick was still stuck with his problem. He couldn’t turn back and his friends couldn’t find a potion that wouldn’t kill him. But luckily for Nick, Diana had been at the shop and she had instantly figured out that Nick wasn’t her daddy so she forced his face to change back. Then the little girl got made when she saw her mother with Nick so prepare for that little problem as everyone tries to cohabitate.

And so Renard had lost a lot with this latest agreement yet a face from his past had come back to warn him that he had chosen the wrong side.