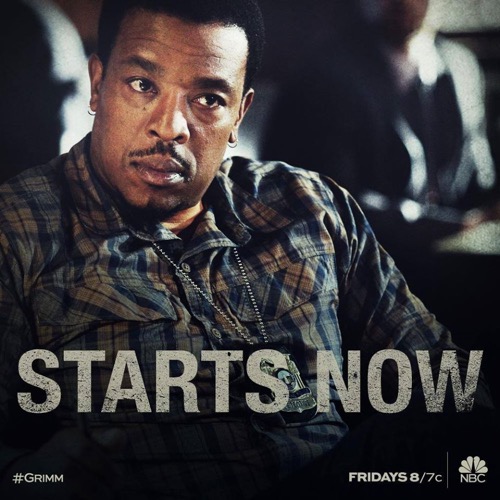 Grimm returns to NBC tonight with a brand new Friday, February 10, 2017, season 6 episode 6 called “Breakfast in Bed,” and we have your weekly Grimm recap below. On tonight’s Grim season 6 episode 6as per the NBC synopsis, “A mysterious Wesen turns sleepless nights into pure insanity. The investigation begins when Nick, (David Giuntoli) Hank (Russell Hornsby) and Wu are called to a local hotel where a grisly murder has taken place, which leads them to a guest who claims to be haunted by a frightening creature. Meanwhile, at the Spice Shop, Monroe, (Silas Weir Mitchell) Rosalee and Eve continue to research the origins of the symbols on the cloth; and Capt. Renard finds it difficult to escape his past transgressions.”

What’s so important about the stick? Both Nick and Eve have been trying to figure that out and whether or not the Seven Grimm Crusaders had hidden it for a reason however they’ve been getting nowhere and meanwhile Eve was still obsessed with the symbols. She had started drawing them after she had been exposed to whatever magic was at work and in a way so has Diana. But the symbols became just another part of the mystery because no one understood them and they didn’t even know what language it was in. So the best that both Nick and Eve could do was take pictures of the symbols she drew and bring it to Monroe.

Monroe was the best translator they knew and he was adept at ancient languages. However, Monroe also had hard time understanding any of it. He said that one symbol looked like this ancient language and another symbol simply had no correlation yet he thought that if they define the symbols piece by piece then maybe they could figure out the overall message. So Monroe had tried that and he had translated one symbol. He had found out that the symbol meant Seven Stars and so he told Nick and Eve that there was a significance of Seven Stars because the Seven Stars had been mentioned all throughout history as a luck fortune.

Yet, Nick did realize that seven kept coming up because there had been seven crusaders along with those seven stars. So Rosalee had said that she had made a couple wishes of her own on a star and that one of them came true though she was obviously implying that one of the dreams had come true had been about Monroe and so that made things awkward for Nick and Eve. Nick and Eve were still getting comfortable around each other again and therefore they didn’t need a reminder that they had once been as in love as Monroe and Rosalee nor did they want to be around each other for that long.

So Nick eventually went to work and he had left Eve behind with their friends in case Monroe was able to decipher anything else, but Nick had barely entered the office when he was already assigned another case. He and Hank had found out that a young man named Michael Sobek had been in the park minding his own business when he saw a man in distress and had suddenly been attacked for no reason. Though thankfully there had been plenty of witnesses around to point out which hotel building the killer ran into and so that’s how the guys found out about Dan. Dan believed a monster was after him and that he comes at night when Dan was trying to sleep.

Dan however had still needed to be brought in if not for his own safety than for others because he had already killed one person he thought might be working with the monster he sees at night. But the police had to knocked down the door to get Dan out of the room and, while they were there, they tried to take some testimony from the people at the “hotel”. The hotel had apparently seen better days and was more or less used as place for people that had nowhere else to go and so it had been full of plenty of characters. There had been the guys that mind the building for the owner even it was clear that they had let the place go and then there had also been a creepy old man.

The old man had been in a wheelchair and had also had an oxygen tank indicating that he wasn’t in the best of health. However, Charles tended to park his wheelchair in the same corner day after day and he just watched people. He didn’t say or bye or even showed emotion when he saw cops storm the building. So Nick and Hank had remembered quite well and they began to think that they were something off about the hotel. They had did some research and Dan had never been violent before yet the hotel had one too many incidents. There had been several suicides, people have been committed after staying in the hotel, and there had been other moments of violence.

Yet, unfortunately Dan’s mind was too far gone for him to tell the cops much and so they had gone to the Spice Shop with a handful of details. They had told Monroe that their possible Wesen had the power to paralyze people, that it had stinky breath, that its teeth weren’t exactly teeth, and that it kept its victims from going to sleep. So Monroe had easily known which Wesen they were talking about because the creature had once driven his poor Aunt Ada insane. Aunt Ada it seems had been attacked by an Alpe and the creature feeds on others’ sleep to get to the melatonin it needed to survive though the creature might have taken advantage of poor Dan.

Monroe and Rosalee had said that someone deprived of sleep creates additional melatonin. So the creature had purposely gone after Dan for a snack despite knowing that it would turn Dan insane and bring unwanted attention, but the Alpe that the guys were dealing with hadn’t cared about getting caught. It had apparently gone after another victim the night after they arrested Dan and the victim had tried running out of the building when she had accidentally hurdled herself over the balcony. Though naturally the manager and his assistant hadn’t heard anything or seen anything so they wanted to write off what happened as an accident and the cops didn’t get help from anyone.

The detectives had tried calling the woman that actually owned the hotel, Beverly Garwood, and she had said that there were plenty of other hotels that had had incidents. So the guys had decided to get their own evidence and they had Monroe go into the hotel with a camera however the camera had gotten knocked over when the creature moved to feed on Monroe and so the detectives broke into the hotel. The doors had been locked by the manager who clearly knew something was happening. But the guys didn’t know that until they realized that there was a passage way all throughout the building.

The passageways were behind the dressers and it connected to the manager who was Hundrager yet the Alpe turned out to be Beverly. She and her family had been using that hotel for years as a snack bar. However, Nick had told her that she could either move somewhere else or he kill her. So Beverly had tried to attack Nick and had killed herself by ramming into the table behind him. And so the Alpe had been removed only that old man had also known what was going on and was taking pleasure out of because he too was a Wesen though not all Wesen were like that. Renard had finally stood up to Black Claw and he had told them that he was done with them so the ghost did leave once he saw Renard was on the right past.

And Rosalee and Eve had news for the guys afterwards. They had figured out what the symbols meant and it was a calendar that could supposedly tell the future.