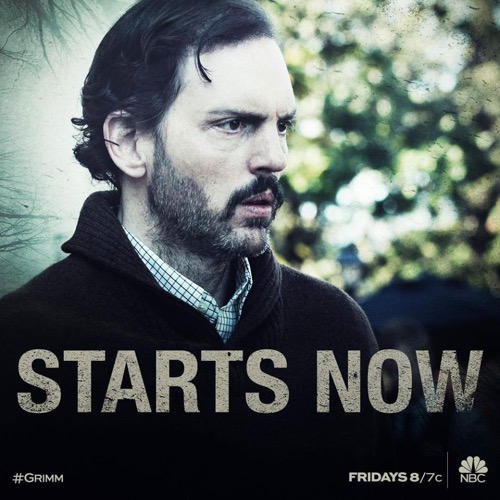 Grimm returns to NBC tonight with a brand new Friday, February 17, 2017, season 6 episode 7 called “Breakfast in Bed,” and we have your weekly Grimm recap below. On tonight’s Grim season 6 episode 7 as per the NBC synopsis, “Rosalee surprises Monroe (Silas Weir Mitchell) with a getaway for his birthday and invites most of the gang to join them. Things take a shocking turn, though, when a hotel employee targets Nick (David Giuntoli) in an effort to avenge his father. Meanwhile, Eve gets a visit from a dark force that she has seen before; and Capt. Renard’s weekend with Diana is interrupted when a former ally decides to get even.”

Diana was an unusual child. She was often more perceptive that she should be and she was definitely more powerful than anyone felt comfortable with however she was still a child and she had asked Eve about her first mommy. Diana had said that her first mommy was Kelly like her brother and that she didn’t where she went. But Eve couldn’t tell the little girl about what had happened to Nick’s mother because she knew that Kelly’s death had been her fault. So Eve had tried putting off telling Diana the truth and she had gotten lucky when Adalind had told her daughter to get ready to go to her dad’s.

Diana was technically going to be spending the whole weekend at her Dad’s because her mother and the others were going out of town for Monroe’s birthday and it was going to be an adult only thing. However, Diana didn’t mind spending time with Renard and she loved the fact she got the chance to cook when she was with him. So remembering that had helped the little girl momentarily forget about her first mommy yet Diana had been asked to keep a secret. She had been asked by her mother not to mention what she saw in the tunnels because it might be dangerous. So the little girl had promised that she wouldn’t mention anything and then she sort of made a mistake at her dad’s.

Diana had started to draw the signs like she normally likes to do nowadays and she had let on a little too much to her father about them. She had said that it was a secret because she wasn’t supposed to mention the tunnels and that her mommy had said it was dangerous. Yet, Renard had been smart enough to take a picture of the drawings because he had wanted to investigate it despite what his daughter had told him. So Renard had been in the middle of thinking up ways he could possibly trick Diana into saying more when the doorbell rang. There had been a delivery for some tree that Renard hadn’t ordered.

The tree had looked like it was a miniature version of a Christmas tree, but Renard hadn’t been in the mood to bring it into the house and he had left it at the front door not believing that there had been anything off about the delivery. Though his daughter had surprisingly been missing when he went back into the dining room and she hadn’t been found anywhere else in the house. So Renard had started to become worried and he eventually realized that someone had taken Diana out of the house. And the thing is he wasn’t worried about her, he stopped looking for her, and he didn’t brother to tell Adalind of all people that Diana was gone.

Renard had just acted calm if not blasé that his daughter was gone and he had gone back to eating the cookies Diana had made while he looked into the pictures she had left behind. But what Renard did wasn’t so odd if one were to think about Diana and what she could do. Diana has proven more than once that she could handle herself and so she did that with Lieutenant Grossante when he refused to let her go home. So Diana didn’t need anyone to come after her or rescue her because she could rescue herself however Renard could at least have called Adalind and tell her what was going before giving Diana another secret she had to keep.

However, Adalind probably wouldn’t have been in the right frame of mind to help anyone much less her own daughter. Adalind and the others had booked themselves in at an amazing hotel that had everything. There was a spectacular view of the mountains and additionally there had also been a winery nearby that meant their drinking options were the best yet unfortunately the “amazing” hotel had come with a downside. The downside was a Wesen with a grudge against Nick and who poisoned all of their drinks with something he knew would cause havoc amongst the friends. So the only person that hadn’t been affected by what the Wesen did was Rosalee.

Rosalee was pregnant which the Wesen didn’t know about it. So she hadn’t taken a sip of the poisoned champagne that had been handed for free because of the birthday boy and so she had been the only one that thought the world had been turned upside down when she came to the next morning. Rosalee saw her friends suddenly become in love with someone else and get into fights though everything had made sense for her when she saw what happened to Hank. Hank happened to drink the champagne that had been made for her and so he became enamored with himself. Yet, everything made sense for Rosalee when she heard Hank singing Marvin Gaye to his own reflection.

That’s when Rosalee knew that someone had poisoned the champagne with the Amor Di Inferno curse. The curse could force a normal person into becoming obsessively enamored with someone else, but the Wesen had tripled what was normally an already dangerous curse to begin with. So Rosalee had made sure to track down the guy that had served them the champagne and she had tried to kill him. Though apparently, she didn’t have to bother with killing him after he threatened the woman that Wu had become obsessed with so Wu had actually been the one to kill the Wesen. And end the curse.

So the friends all returned to normalcy and they had passed on the next free offer of champagne however next week the group will finally get to discuss the skull like creature that had showed up in Nick’s bathroom mirror.