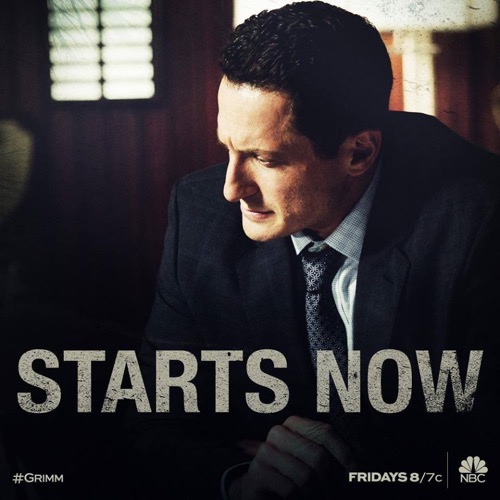 Grimm returns to NBC tonight with a brand new Friday, February 24, 2017, season 6 episode 8 called “The Son Also Rises,” and we have your weekly Grimm recap below. On tonight’s Grim season 6 episode 8 as per the NBC synopsis, “Deadly attacks on scientists lead Nick, (David Giuntoli) Hank and Wu on an investigation unlike any they have had before. Meanwhile, as the research continues into the origins of the cloth, Monroe (Silas Weir Mitchell) and Rosalee learn that Eve is feeling the aftereffects of the death grip. Elsewhere, Capt. Renard reaches out to an old friend to get answers to the origins of the symbols drawn by Diana.”

The harmless cloth that Nick had found was more than just a cloth. It seems that was a calendar that could tell the future and so it said something was coming. But the gang knew that whatever that ‘something’ was that it couldn’t be good. So they all chose to a little more research into what might be coming their way. They had looked into ancient texts, pagan rituals, and even the few things that Nick still had about the Grimms however they didn’t find much of what they wanted because what Monroe found may or may not be connected to the March Event!

Monroe had apparently found a mythological rendering. Pope Gregory XVI had ordered the rendering to be painted on some church or another yet what was odd about it was that it mixed Wesen culture into the astronomical as if the pope truly believed that Wesens came from others worlds. However, the fact that the pope could have seen Wesen meant he was probably a Grimm and so there was a chance that the pope did know what he was talking about when he mentioned Wesens. So did they come from another world or was Pope Gregory simply seeking answers?

But those questions were secondary to everyone. They did want to know more about what the pope learned though they hadn’t been sure if that was connected to the cloth or if the pope was merely telling them how to read the astrological calendar. So the guys had called in for a night because they had been working long hours trying to decipher the cloth and the others had been surprised when Eve said she wanted to stay at the spice. She had told them that they all needed their space and that she wanted to keep looking into the calendar.

So the others didn’t have a problem with that. Monroe and Rosalee had a cot and bathroom at the spice shop so they knew that they weren’t leaving Eve in an impossible situation. Yet, Eve was later attacked in the night. She had unfortunately seen the skull guy again in the mirror and she had tried to smash the mirror however the mirror put itself back together and the skull creature had reached out of it to attack Eve. So she had been in a pretty bad shape when Monroe and Rosalee found her the next morning.

Eve had a cut her head, she had bled profusely, and she hadn’t regained consciousness at any time while she was being loaded up in the ambulance. But Nick had walked away from an active case the second he heard about Eve. He had wanted to find out how bad it was yet he knew who hurt her after Monroe and Rosalee explained that Eve had been found next to a mirror. So Nick told the couple about the skull that both he and Eve could see and he apologetic told them that they had forgotten to mention it after Monroe’s birthday.

Though finding out that skull had been terrorizing their friend since she was caught in a death grip had been a lot to take in. The couple had been upset that they had heard about it sooner, but they also were apprehensive about the skull guy and whether or not he could come back. So the couple had been scared about what the future looked like meanwhile Nick had just been scared for Eve. Nick had accidentally called Eve “Juliette” when he first heard what happened and both Wu and Hank had noticed it.

So the guys had commented about it to themselves though they didn’t want to ask Nick what it meant. They had known what happened between Eve and Nick and so they hadn’t wanted to pry or pull Nick away from Eve as she was recovering. But the case that they had been working on had taken an unusual turn. The guys had found out a group of scientist had carried some controversial experiments and that one of them had been to piece together body parts of the dead in order to revive someone. And that someone had been Victor Shelley’s son.

Dr. Victor Shelley and his three other scientist friends had tried to revive his son because he hadn’t been able to leave with the lost. However, it was Frankenstein come to life because the parts they used had been from Wesen and so that young man didn’t know how to handle his gifts. He died a human and woke up a Wesen. So the others had tried to convince Shelley to kill his son and he couldn’t. He just kept hoping that he would fix what went wrong and that his son would be normal again.

Only the others didn’t want to try again. They had seen the worst of science and hadn’t wanted to wipe the slate clean. But the young man who was wondering the streets had wanted revenge as well. He had attacked the other doctors one by one and the last doctor he had attacked had been at his father’s house. His father’s former friend, Dr. Julian Levy, had tried to talk some sense into Victor and he demanded that Victor finally kill it because it had already hurt those closest to them. So Hank and Wu walked in just as they were needed.

The guys had seen the creature in action and they had tried to take it down. Yet, they had been struggling and so Victor did step up. He had shot his son and he apologized him. So the last thing the creature had said was “me too” because he knew that he had done some terrible things, but now Victor will go to jail for what they did and he would have to explain why so many are dead. And while everyone was trying to past recent events, Renard was reaching out to his old friend to have Diana’s drawings explained to him.