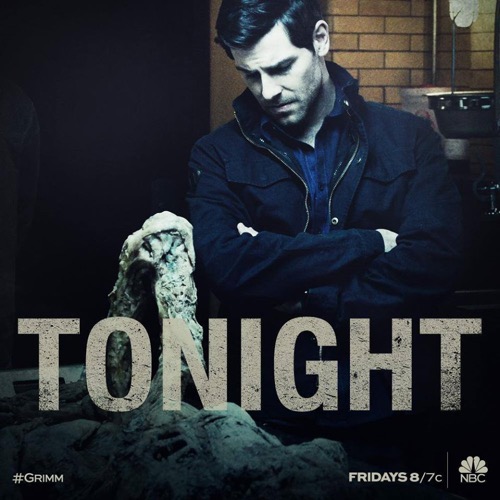 Grimm returns to NBC tonight with a brand new Friday, February 3, 2017, season 6 episode 5 called “The Seven Year Itch,” and we have your weekly Grimm recap below. On tonight’s Grim season 6 episode 5 as per the NBC synopsis, “A new Wesen with a deadly hunger is unearthed after lying dormant for seven years; at the same time, Nick, (David Giuntoli) Hank (Russell Hornsby) and Wu investigate a bizarre murder in a local park. Meanwhile, Capt. Renard (Sasha Roiz) continues to be haunted by a ghost from his past; Monroe (Silas Weir Mitchell) and Rosalee seek a doctor’s opinion on whether Diana’s premonition is true and an extremely weak Eve is found in the tunnels by Adalind.”

Renard wasn’t the only one that was haunted. Nick was also reliving the day Napoleon had come after him and he was still trying to remember just how he had survived the brutal assault at as his loft. But Nick didn’t have the answers and his loved ones weren’t much help as he was trying to figure everything out. They had already and were hiding out in the tunnels when Nick had supposedly died. So the fact that Nick had survived getting shot had been a surprise to them as much it was to him however, Nick’s friends tried to keep Nick focus on the things that mattered. Like his family and his job!

Nick had enjoyed having Adalind and Kelly back. However, they were fine now and they had no intentions of leaving him ever again. So Nick had been forced to focus on his job as a detective because there had been work for him to do. There had unfortunately been a murder reported in Stillman Park and oddly enough the victim had apparently called 911 right before he was murdered. The victim’s name was Jeremy Trauberg and he was admittedly in the system for drunkenly disorderly as well as other such nonsense yet from all appearances he wasn’t such bad of a guy. And the 911 he made hadn’t been for him

Jeremy it seems had had a few drinks with friends at Flannigan’s and had been in the park at night because he was taking a shot cut home when he came across a man covered in dirt who claimed he was hungry. So Jeremy had done the right thing by calling 911 in order to get the stranger help the needed though that same stranger had turned on him on the first chance he could and had killed Jeremy before he could even put up a fight. Yet, Jeremy’s body was eventually found afterward with no clothes and no wallet so the poor man had also been robbed by a man that he had turned into a giant insect.

Though Jeremy wasn’t the insect’s first victim. The hole he had climbed out of in the park had sadly had another body lying in it and so that had given both Hank and Nick a clue about what they were looking for. The guys had correctly guessed that they were dealing with a Wesen and so they had dropped by the tea shop to see if they could check the books. So they were looking for a particular Wesen that took victims underground and feed them when they came across Rosalee and Monroe. The couple had gone through with their ultrasound and they had found out that they were having triplets.

So Diana had been right when she predicted that there was more than one baby in Rosalee’s stomach however neither Monroe nor Rosalee thought they would end up having three babies. But the couple were obviously glad that everything looked alright and they felt for sure that they would be able to handle having triplets. And so there was nothing stopping the couple for helping Nick and Hank. They had looked at the creature that Nick had eventually found in the books and they had also been shown picture of what the Wesen looked like in human right.

The guy had surprisingly looked clean cut and Monroe seemed to think that he saw the guy somewhere before. However, the others thought that Monroe was probably mistaken because of the Wesen they were talking about. The Wesen apparently hunted down “bigger” women and then he took them underground to feed on them for several years. So the creature they were talking about was considered to be a partier that merely resurfaced every time he was hungry and hunting down women to feed upon yet, despite everyone said, Monroe swore that he saw the Wesen some place and simply couldn’t remember where.

The time though was ticking and the guys they had to find the Wesen before he picked up his latest victim. So they shouldn’t have had to derail the case because of a personal problem but, that’s what happened after Diana sensed something was off. Diana had been drawing the strange symbols that Eve had seen and Adalind hadn’t questioned until Diana revealed that Eve was injured and in the walls. Yet, Adalind didn’t know what that meant or if Eve was becoming a problem so she had to call Nick to get him to come home. And Nick had done as she asked. He had come back home and he had tried to figure out what was going on with Eve.

Though he couldn’t figure out why the mystical cloth or the stick was making him, Eve, and Diana have visions. He knew that there was something it was trying to him however he had promised to put it away and was actually trying to keep that promise. So Nick went back to working on the case and he had found out with Hank that the Wesen had found his latest victim. He had unfortunately picked her up at the bar and the two had walked out without anyone noticing. And so Nick had hit a wall because he didn’t know where the Wesen was going to take his victim.

So Monroe’s phone call had been a lifesaver. Monroe had finally remembered where he saw the Wesen before and he called Nick to tell him that the Wesen was William Stillman as in the pioneer that founded Portland and who the Stillman Park had been named after. But there was one problem with William and that was the fact he was immortal. The immortal Wesen had donated the land where the park stood because that was his hunting ground and so Nick and the rest had known where William would go with his victim yet they didn’t have to rescue their victim because she wasn’t quite so defenseless.

The victim had later proved to be a Wesen herself and she had been the only one that could kill the alleged immortal cicada Wesen. However, the guys had thought about what afterward and they couldn’t help thinking that a Wesen founding where they lived was just too odd for them. So the guys were studying William’s statue in the park while Renard had gone and done something stupid. He had apparently tried to remove Meisner’s spirit and that may have unleased the spirit into the real world.