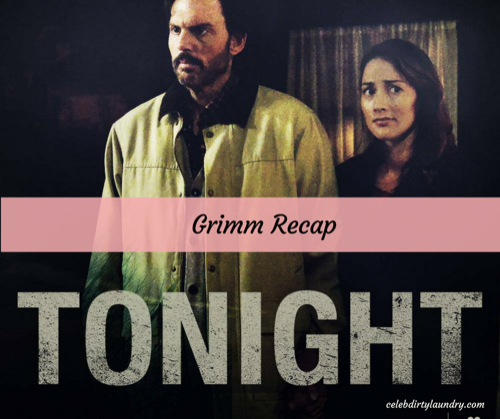 Grimm returns to NBC tonight with a brand new Friday, March 10, 2017, season 6 episode 10 called “Blood Magic,” and we have your weekly Grimm recap below. On tonight’s Grim season 6 episode 10 as per the NBC synopsis, “A string of brutal deaths may be tied to an unlikely perpetrator found by Nick and Hank in a local nursing home. Meanwhile, Eve goes to Adalind to get answers that only a Hexenbiest can provide. Elsewhere, Capt. Renard confronts Nick about the mysterious symbols and tries to strike a deal.”

Don’t forget to bookmark this spot and come back between 8 PM – 9 PM ET! for our Grimm recap.  While you wait for the recap make sure to check out all our Grimm spoilers, news, recaps, pics & more, right here!

Eve had wanted to find the creature that was stalking her. She thought that if she found it that she could kill it however she didn’t know where to look and Adalind had sort of been a last resort. But Adalind hadn’t wanted to help. Adalind thought that it would be too dangerous and that they should to talk about it with the others first. So Eve had manipulated Adalind. She said that she thought the creature was looking for her because she could see the signs in the tunnel and that it would mean Diana was in danger as well. And so Adallind decided to help Eve because she hadn’t wanted that creature after her daughter.

However, Adalind’s assistance wasn’t much. Adalind, herself, didn’t know what that creature was and therefore the best she could do for Eve was to give the other women some of her mom’s old spell books. So Eve had taken the large collection home with her, back at the Spice Shop, and there had been a lot for her to go through yet Adalind later came clean with Nick and she told him about the spell books she had given Eve. She said that it was best they found out what the creature was and that Eve was going to go looking for answers with or without her which was true even if it did little to comfort Nick.

Nick hadn’t been happy to hear about what Eve was doing. He too thought she was she taking a great risk with her life just to find a creature that had nearly killed her once. Yet, there was no slowing than Eve and he had had a job to do. So Nick chose to talk about the matter with Eve later just so he could focus on his latest case and the case had been odd. The young woman, the victim, had been found with a gaping hole in her chest though before that she had told her friend that she was going to get the car and had never came back. So that had prompted her friend to go looking for her and she had found the victim lying on top of her car.

So right away Nick, Hank, and Wu knew that a Wesen was involved. A Wesen would explain the bizarre way the victim was murdered and it was possible the Wesen was frightened off by the friend showing up. Though what hadn’t made sense was why? The friend hadn’t been a Wesen so that increased the odds that the victim hadn’t been one either, but if the victim hadn’t been killed because of some sort of grudge then that would make her death random and hard to solve. So the guys were hitting a dead end as they were looking for their killer when they came across another case that was right up their alley.

An elderly woman had been dead at her retirement home and the lead nurse believed the woman may have died after she got into a fight with an orderly that claimed she changed into a beast. But the nurse was claiming and the guys knew that orderly was perfectly justified with defending himself against a Wesen with Alzheimer’s. So they had waited on the autopsy and the autopsy had showed something strange. It said that Mrs. Cutler had an extra amount of enzyme in her body that could only come from a bug’s saliva so the guys thought it was possible another Wesen had killed their victim however they had needed Monroe and Rosalee’s help.

An elderly woman had been dead at her retirement home and the lead nurse believed the woman may have died after she got into a fight with an orderly that claimed she changed into a beast. But the nurse was claiming and the guys knew that orderly was perfectly justified with defending himself against a Wesen with Alzheimer’s. So they had waited on the autopsy and the autopsy had showed something strange. It said that Mrs. Cutler had an extra amount of enzyme in her body that could only come from a bug’s saliva so the guys thought it was possible another Wesen had killed their victim however they had needed Monroe and Rosalee’s help.

The guys didn’t know specifically which Wesen they were looking for. So they had gone to the Spice Shop for help with identifying the creature and they noticed that something was off with the couple right away because for the first time in probably forever their friends hadn’t wanted to help them. Monroe and Rosalee had even said that Nick should drop the case. However, Nick and Hank couldn’t do that so they had asked their friends what was going on and had the matter explained to them. The creature was called Gevatter Tod and it was known as the “Godfather of Death” because they were the people the Wesen community called when a Wesen was experiencing dementia or similar diseases that caused them to put the community at risk.

Yet, Rosalee and Monroe had said they had made an agreement with each other to call the Gevatter Tod if one of them ever became sick and so the Wesen was a way for the elderly in their community to pass peacefully. So the couple hadn’t wanted to hand over the Gevatter to Nick though he had said he wouldn’t arrest the man and that all he wanted to do was talk. And so later Nick and Gevatter meant and all Nick had wanted was confirmation that the orderly hadn’t killed Mrs. Cutler because he needed to be able to free the poor man that was in jail. So the Gevatter gave Nick the confirmation he needed and he also managed to help Nick close another case.

The Gevatter had been called to another job and Nick had gone with him. Though the other job had been the Wesen he had been looking for who had already targeted two people, but it seemed the Norm Stanton was suffering from dementia and took to wandering the streets at night because he was confused. So Nick and Hank could have arrested Norm however they knew that they couldn’t put Norm in prison and so they allowed the Gevatter to help Norm pass seeing as he was just going to keep on killing whenever he got scared outside.

So the guys ended doing the right thing and Nick had also come to an agreement with Renard to trade information about what the signs in the tunnel mean if Renard could help him yet Eve had used blood magic to travel through the mirror and she hadn’t told anyone what she was going to do.