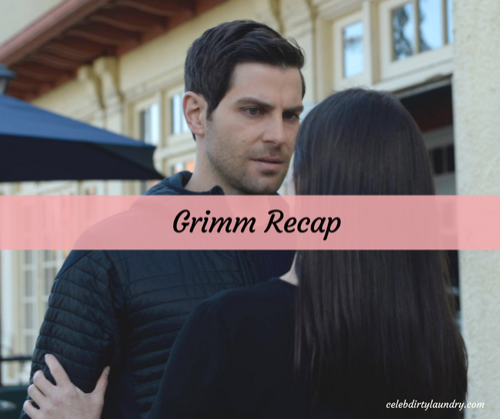 Grimm returns to NBC tonight with a brand new Friday, March 3, 2017, season 6 episode 9 called “Tree People,” and we have your weekly Grimm recap below. On tonight’s Grim season 6 episode 9 as per the NBC synopsis, “A man claims his friend was consumed by a treelike figure; and the gang learn of Eve’s disturbing mirror encounter, which leads everyone to take extra precautions. Meanwhile, Capt. Renard tries to determine what Diana was drawing.”

Don’t forget to bookmark this spot and come back between 8 PM – 9 PM ET! for our Grimm recap.  While you wait for the recap make sure to check out all our Grimm spoilers, news, recaps, pics & more, right here!

Eve was doing better. She was still a little shaken up after everything she went through because of her ordeal however she had later been released from the hospital and hadn’t wasted any time in wanting to find the thing that attacked her. But Eve like everyone was stumped. She had first thought that she was just seeing things when she first spotted the skull haunting her. So it hadn’t been until Nick saw it too that she realize she wasn’t crazy. And so Eve had needed Adalind’s help in figuring out what was going on.

However, Adalind hadn’t been so sure herself. Adalind had thought that maybe a spirit had attached itself to Eve and that it was refusing to let go yet that didn’t explain why Nick could also see it or why Diana could sense it. Diana had walked in on the group as they were checking out the mirror and she had told them that the skull wasn’t exactly real or dead. She said that it had simply gone back to the other place through the hole in the mirror. So that had freaked everybody out because they didn’t know if the skull could come back or if would come after any of them.

So Monroe had then issued a new policy. He said that no one was going to look through a mirror when they were by themselves and that they were to keep the things hidden away or covered. Yet, Eve later talked her friends into showing her Rosalee’s family mirror and it had started dripping blood the second she had wrapped her hands around it though again no one knew what it meant and so Eve came up with a drastic idea. She said that thought that they should travel through the hole in the mirror.

Eve had said that they wouldn’t get answers any other way and so she did make a good case. Though the other place could very well be another world. It hadn’t been something that any of them had ever heard of and they didn’t know how to get there or if they wanted to put themselves in harm’s way by attempting to go there. So neither Monroe nor Rosalee had felt at ease about Eve’s plan and so it wasn’t surprising when the couple did jump at the chance to tell Nick because they both knew that Nick would have probably agreed with Eve.

But, thankfully, Nick had been too preoccupied to focus on the mirror skull. He, Hank, and Wu had heard about a case involving a tree monster from the sheriff’s office and so of course got involved. They talked to the eye-witness who said that he and his buddy had been hunting at night and that a tree monster had grabbed his friend. So the guys had wanted to see the body and Ralph had showed them where he had last Dev however Dev hadn’t been there and there hadn’t been any evidence of foul play.

So the guys had wondered if Ralph was simply telling them a story to cover up for killing his friend yet Wu did find out that something strange was going on in the forest. Wu had found several other in which people have gone missing in the last five years and in that same area. Meaning there really was a tree monster. However, the guys didn’t know how to stop it from taking people until they found out where it was and so they had had to enter the forest.

The guys had gone walking around in the forest to see if they could find the monster and they had come across a fresh victim. The victim had been dumping poisonous waste in the forest and so that’s why she had been targeted. Yet, the creature that had attacked her had also dragged her body back to a tree that feeds on blood and the tree had showed all the faces of people that had been sacrificed to it. So the Wesen was helping the tree and, in return, the tree was helping the Wesen though unfortunately there had been only one way to lure the creature out – harm the tree.

Though hadn’t wanted to do it. They didn’t believe in harming nature like the victims had and they had genuinely questioned if it was best to disrupt things. So what won out had been the fact that the Wesen was feeding on their species and so the guys went back into the forest with Monroe, but the poison they had brought with them hadn’t been doing the job. It had been too tame and so the guys had called Rosalee to get something better and she had said that she could deliver the poison in person.

So Rosalee drove on a rough road and she incidentally dripped oil all over the forest and so the monster had tried to attack her rather than the guys. But the guys did hear her screams and came running to rescue however the rescue itself had been a little bumpy. The creature had gotten the better hand over almost of them and it was just about to feed them to a tree with a gunshot ended up saving the day – the gunshot had caused the creature to release its tentacles and it had gone back into the tree where many of them thought it had died. Only it didn’t die!

The tree had simply protected it from being harmed by Nick and his friends.