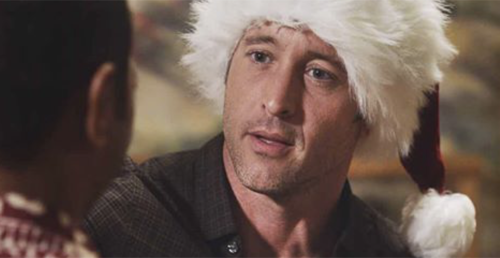 Tonight on CBS Hawaii Five-0 air with an all-new Friday, December 15, 2017, episode and we have your Hawaii Five-0 recap below.  On tonight’s Hawaii Five-0 season 8 episode 10 & 11 “I ka wa ma mua, I ka wa ma hope. (The Future Is in the Past) and Oni kalalea ke Ku a ka la’au loa (A Tall Tree Stands Above the Others)” as per the CBS synopsis, “When Danny is shot while quarantined in the hospital with McGarrett, Tani, and Junior, he’s left unconscious and clinging to life, imagining a future for everyone in Five-0. It’s Christmas Eve and Danny tells Charlie a bedtime story about a recent Five-0 case involving bad Santas and a holiday miracle.”

McGarrett and the others were still in quarantine. They had been left exposed to a super virus and had needed plenty of time to recuperate however they had started to get a little stir crazy what with being locked up for weeks. McGarrett had decided out of the blue to give himself a buzz haircut and had tried to give the other guys one as well. But the others were simply torturing themselves by playing Go Fish for hours on end. So they were all ready to leave the quarantine and had been to see someone in a hazmat suit coming their way because they thought he was the doctor that had been treating them.

But the man that walked into their room hadn’t been their doctor. It had been some stranger and he had pulled a gun on all of them because he apparently wanted them to tie each other up. So McGarrett tried talking to the guy and telling him that he put himself at risk by coming into the quarantine without knowing how to properly prepare himself yet the stranger hadn’t been concerned by that and had actually taken the mask off his face because he wanted to see if Danny remembered him. Except Danny couldn’t recall ever meeting him and had asked the stranger should he have remembered him when the stranger shot him?

The stranger had shot Danny once in the chest and had then killed himself. But the stranger also happened to pin an explosive to the doors making it impossible to open. So the others had tried treating Danny themselves and had tried looking around their two rooms to find something they could use to stop the wound from bleeding out, but eventually, they started to break things. They busted a hole through the wall to get the medicine cabinet outside of their controlled rooms and in doing so they had caused a pipe to burst. And while the water was taking its sweet time leaking to the floor below, the others had tried using something McGarrett learned from the field.

They tried cutting down on the all the oxygen that was getting into the wound by taping it off and using the oxygen mask from the hazmat suit to lowering Danny’s CO levels. But that leaking water alerted a nurse who went to go check on the leak and had quickly sent up a Code Blue. So an armed response team quickly made it the hospital and both they along with the doctors had had to find a creative method of treating the situation through the doctors were concerned about Danny and the bomb squad didn’t know how to talk Tani through her first bomb. Therefore, they were all lucky that there were still some members of Five-0 that could lend their assistance.

Lou had raced down to the hospital to put some pressure on the bomb team because they had all written off on getting inside and diffusing the bomb that way. But with Lou breathing down their neck, the bomb squad did manage to think of something and were later carrying it out when the doctors began talking McGarrett through surgery. Surgery was the best chance Danny had at surviving the gunshot wound until he could see actual doctors and so McGarrett went ahead with everything the doctors were telling him however it had been a horrifying ordeal because McGarrett had been too scared about possibly hurting him.

McGarrett, for instance, had hesitated on pushing a tube into Danny’s chance because he hadn’t wanted to push it in too deep. But that’s exactly what the doctor asked for. So McGarrett eventually had to let some of that worry go and he soon finished everything that he could readily do at the doctor’s insistence, but the doctors told Lou that Danny needed to be moved to a proper OR soon or they’d lose him and so Lou checked on the bomb squad. The bomb squad had agreed to set off a controlled blast to get inside the room and their blast didn’t do a single thing. And so Lou gave up on the people that supposedly know better to break into the room on his own.

Lou grabbed a sledgehammer and tore down a wall that was just big enough to get a gurney in. But Danny was the only one allowed to leave quarantine because of his injury and so the others had been forced to stay behind. They hadn’t liked it yet they knew why they were being told to stay put and had done as they were told until finally released. So they had gotten chance to wait with the others which included Danny’s nephew that had needed some support and all together they later heard back from the doctors. Danny had fortunately made it through surgery and the doctors believe he’ll fully recover in time.

But there had also been news about their shooter. The shooter had used an alias to sign into the hospital and also book a hotel room. So Five-0 went to the hotel hoping they’d identify him and instead they found a picture of Danny that said: “He Deserves to Die”.

No one knew what that message meant or who it could have come from. But in the weeks that followed, Danny tried to put the whole thing behind because he had the kids this year for Christmas and hadn’t wanted his son to worry. His son still doesn’t know he had been shot and so Danny asked Adam to not mention anything when Adam stopped to help them clean out their chimney, but Adam hadn’t mind going up on the roof because he hadn’t wanted Danny to risk injuring himself. So Danny explained to Adam all the things he had to get ready for kids. Like making sure Santa could use the chimney and that all the Christmas cookies were eaten.

All of which sounded pretty laughable to Adam. But Danny said he’ll get it once he and Kono have kids one day and had said goodbye to a friend that was clearly looking forward to the future. So Danny tried to finish his Christmas tradition by reading Charlie a bedtime story and the book had been good though Charlie had wanted another story and so Danny found himself telling his son about a case. The case involved several bad Santas stealing money and that there had be good guys that went after them like McGarrett or “Uncle Steve” as Charlie called him. And so Uncle Steve chased after these bad guys despite being only one man.

That’s why Danny called him the crazy guy as well as one of the good guys. But the Santas had split up and Uncle Steve could only chase one. So he decided to chase the Santa that he could better reach and that Santa had seen Uncle Steve closing in on him so he took a woman hostage, however, Charlie wanted to know where were Uncle Steve’s friends. His friends should have been there to help and so Danny explained Uncle Steve hadn’t called his friends because he thought he could handle the situation. And so the friends hadn’t known what he was doing until they heard about a “911”. The call along with the Uncle Steve’s movements had told his friends where he was and so that’s when they went to his rescue.

But Uncle Steve had lost sight of the bad Santas at the mall and it was pretty crowded. So they got, even more, help thanks to Junior. Junior had been driving veterans to the shelter because they feed the homeless every year and this year they had wanted to help Uncle Steve because they knew they could assist him. They had one vet that used to work at the mall and therefore knew how to navigate it, but more importantly, none of the vets were worried about getting hurt and so Uncle Steve agreed to them going inside. He asked them all to move about the mall quietly and try to get as many civilians as they could out of there.

So they did their part by easily blending in with the crowd. No one was going to suspect a vet in a wheelchair or one with a mechanical arm. But they helped clear the place department store by the department store and that allowed Uncle Steve to find something. He found out that the Bad Santas had changed out of their clothes and that they were moving about the mall dressed as civilians yet one of the vets figured they could find out more about the bad guys at the car they had been using and so they found a cap with a fingerprint. The print belonged to a known bad guy and so the police had a picture of him.

A picture they could use at the checkpoint. But then Danny had to explain things like checkpoints and fingerprints. So he ended up teaching Charlie new things that Charlie found to be cool and then he carried on with his story. Danny told his son that Uncle Steve stopped looking for Santas because he thought the bad guys were in everyday clothes and so it was much later on that Uncle Steve found out the bad guys had found out about the checkpoints because that’s when they decided to steal two more Santa suits. And so one bad Santa had almost gotten away because he was wearing Santa suit when everyone was checking regular people.

Only Uncle Steve had found out what happened and so one bad Santa was arrested while he called the other. He used the loudspeaker to ask the guy to turn himself in and he didn’t want to. But the good guys spotted him and Uncle Steve chased after him until he eventually caught him. So it was a happy ending for Charlie and Charlie got to go to sleep knowing that everything was right in the world because the good guys even got to have their own party at the end, but that party from the story had been important for Junior because he was praised for bring in the vets and finally promoted to Five-0. And so it really a happy ending for everyone.