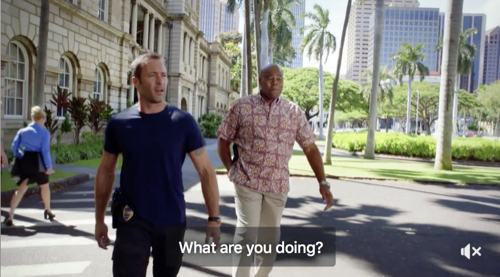 Tonight on CBS Hawaii Five-0 air with an all-new Friday, October 6, 2017, episode and we have your Hawaii Five-0 recap below.  On tonight’s Hawaii Five-0 season 8 episode 2 “Na La ‘Ilio (Dog Days)” as per the CBS synopsis, “McGarrett and Five-0 work with an injured police dog that is the only witness to an ambushed drug bust. Meanwhile, McGarrett is visited by Junior Reigns, a former Navy SEAL, who is looking to join the task force.”

The team were brought in on a DEA case on tonight’s episode of “Hawaii Five-0” after two agents were murdered in the field. However, the agent’ service dog had also gotten lose during all the chaos. So one of the first things that McGarrett did was look for the dog. The dog had faithfully served Agent Lazio, but he too had gotten injured in the line of duty and so McGarrett found him bleeding out. The dog had dragged itself from where it was initially injured to a quiet corner where it may sleep peacefully.

But the dog was of interest to McGarrett. McGarrett had been arguing with Danny not a minute before about how to make the best pizza and whether he could veto any of Dann’s decisions though that had quickly changed after McGarrett found out about the dog and he wasn’t the only one angry. Danny also believed whoever shot the dog was going to hell because that just seemed unnecessarily cruel to him. So everyone was upset about what happened to a dog named Eddie and they had wanted to find out who was behind the hit because it was clearly a set-up.

The DEA had showed up at the docks because they had gotten a tip about their case. They had been working on who was bringing drugs into Hawaii and they had been told that they could find their culprits in the act if they showed up at the docks at a certain time. Though the DEA had gone there and had been shot at by people in strategic locations. So McGarrett and Lou had later gone to see Lazio’s informant Kiana. Kiana had once been a drug addict yet she met Lazio and he had gotten her clean. And she had helped him with his case in return.

Kiana said she had met up with her former drug dealer and that he hadn’t had what she wanted, but promised the shipment was coming in and that she wouldn’t have to wait that long. Yet, Kiana who had no reason to doubt this information had then repeated her conversation to Lazio. Lazio was close to busting the case wide open and so he thought the information was good when it was in fact suspected that both he and Kiana might have been set up. So McGarrett asked Kiana for the drug dealer’s name and all she had was Manny.

She hadn’t known Manny’s last name and therefore it had been up to the team to figure out who he was. But they eventually figured out Manny was Manny Delarosa. He’s been in trouble before however it had seemed like he was finally settling down and had even gotten a job at a high-end restaurant. So McGarrett and Lou had gone to the place and they found out that Manny hadn’t come in that day. He simply never showed up and the restaurant owner didn’t think about it that much because he knew Manny was on probation.

Then while the owner was getting Manny’s address for them, he talked to McGarrett who also said he was opening a restaurant and he told McGarrett that it was a bad idea. The other guy had said that running a restaurant was stressful and that his former partner of had dies at 42 because of the stress. However, what truly got to McGarrett had been the liquor license. The license was something that would take months to process and it was essential to any restaurant that wanted to stay in business though McGarrett hadn’t known that.

McGarrett hadn’t known much at all about opening a restaurant and they didn’t know how to get their affairs in order. Though McGarrett focused returned to the case when he and Lou went to Manny’s apartment. Manny hadn’t lived that far from the restaurant and so it had been easy for them to get to his place, but they had walked in on Manny overdosing. Manny had been injected with pure heroin and it had eventually killed him before an ambulance could arrive. So Five-0 had then looked into Manny’s past because Manny must have been killed for knowing too much.

Except the next suspect they had come up with had been seen by the docks. Tani said that she saw this guy Jesse hanging around not that long ago and so she and Danny concluded the dealers must have come back for the drugs. But that meant Lazio’s information had been good and that the men had been caught unaware. So Danny and Tani chased down their suspect and they got him to leave the van he was driving yet Jesse had later been killed by another DEA Agent that said he had no choice in the matter. And that so that just left the vehicle.

The vehicle Jesse had been trying to sneak away from the police had been full of what looked like crates of wine. Yet, that “wine” had actually been liquid cocaine and Manny’s boss at the restaurant had been the one sneaking it into Hawaii. So McGarrett and Loy had gone back to the restaurant to arrest the guy and they found out he fled. There had been no signs of anyone in the place and the drug operation had clearly gone underground however a preliminary autopsy of Jesse had revealed that he had been executed and not killed in the line of duty.

Meaning the DEA Agent that killed him – Reid – had been in on the drug operation. However, Five- 0 then began to pursue both the drugs still out there because they knew that would lead them back to the kingpin as well as the dirty federal agent. So McGarrett took the recently healed Eddie out in the field and together with the team they were able to track the drugs back to its warehouse, but he took care of the snobby restaurant owner and Eddie took care of Agent Reid. Reid had tried to convince Eddie that he was still one of the good guys and not even a dog could believe that!

Eddie attacked Reid and practically mauled him to a bloody pulp. But Lou ended up changing his mind about being a dog person and became Eddie’s new best friend. So McGarrett also decided to change his mind. He had met a young man that had wanted to join Five-o and he introduced Junior Reigns to HPD because Junior still needed to go through the academy before he could officially join the team. And McGarrett was going to need someone to fill Kono’s spot now that FBI wanted to keep her around longer.

As for Eddie, he was still grieving Lazio’s loss and it was going to take a while before he could eventually move on to accepting anyone else…