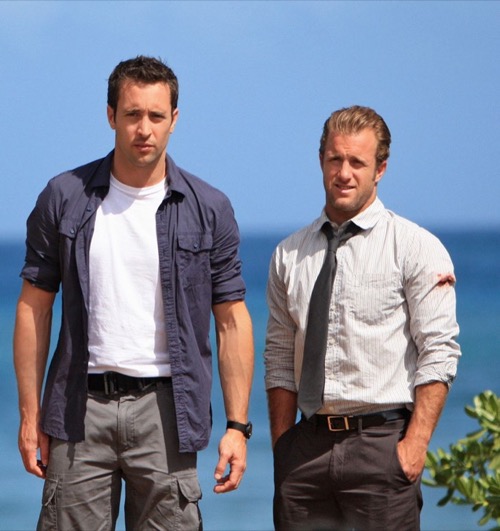 Tonight on CBS Hawaii Five-0 air with an all-new Friday, November 17, 2017, episode and we have your Hawaii Five-0 recap below.  On tonight’s Hawaii Five-0 season 8 episode 6 “Kau ka ‘onohi ali’i i luna (The Royal Eyes Rest Above)” as per the CBS synopsis, “Junior and Adam back up McGarrett when a bank heist in progress forces Steve to make a potentially heartbreaking mistake. Also, Adam is forced to face an empty home without Kono.”

Junior was more than just the trainee. He had a past of his own and it had nearly run him over on his morning jog. But Junior wasn’t the only one that was facing regrets. He had run into a woman he used to know and had found out she was having a family of her own now which was heartbreaking, however, Tani was the one with the brother that refused to learn. She had been forced to fetch him from a drug den after she found out it was going to be raided. So she tried to get him to come with her on his own volition and he hadn’t wanted to leave. He thought it would look bad if he left right before the place was raided and so he had considered staying.

But Tani managed to talk her little brother out that. She told him that there was nothing she could do for him once he’s in the system and so that had been the push he needed. He eventually left with her and so she had saved his skin once again yet Junior was still dealing with his problems. He had been upset to run into a very Layla and that had messed with the rest of his workout. So he was taking a breather when he noticed something suspicious. Four guys had left their car outside of a bank before going in with empty duffle bags and the bags had been so large that Junior’s gut started to tell him that something was wrong.

Junior suspected something was going to happen at the bank and so the first thing he did was call McGarrett. McGarrett had been on his way home with Adam and he had been cheering up his friend because Adam’s wife wasn’t ready to go back home. But the phone call from Junior had changed everything and so McGarrett told Junior to stay put because he was on his way. So McGarrett had rushed to the scene and he had only called the first of his team after he decided to go in though neither Junior nor Adam was going to him do anything on his own. The guys had followed McGarrett and McGarrett had been forced to bring them along.

So the guys had moved throughout the bank uncuffing people and trying to get them to safety. But they hadn’t been able to find the bank robbers. They knew those guys hadn’t gone through the front door because they hadn’t seen them and so McGarrett had realized they had gone into the vault, but an explosion went off before anyone could get near it and it had knocked everyone out. Thankfully, the guys had been alright what with McGarrett coming to and then getting everyone else up. And so they had found someone to open the vault for them and had gone in there to find a tunnel. The thieves had used a tunnel to escape without anyone seeing them and McGarrett had pursued them.

McGarrett decided to pursue them on foot and so he had followed the tunnel. But the others had tracked his movements aboveground and had tried to keep up with him in case he ran into some trouble. So the guys had been nearby when McGarrett had accidentally shot one of the good guys. The guy had been wearing an HPD uniform and so they had all tried to rush the guy to the hospital though it had been too late for him by the time they got there and so McGarrett had a rough time with dealing with what he did. He had truly believed he had made a mistake and that it had cost someone their life. And so there was nothing anyone could say to McGarrett that could make him feel better.

But the others knew they had to keep looking into the robbery and so they went back to headquarters to investigate what they had. They found out the robbers had shut down the electricity in the tunnel the night before and that they had made off with ten million dollars that had been deposited on the same day. So Adam suspected the money came from organized crime because he remembered his father’s dealings and another thing that had been brought up was how did the robbers know the money was going to be there. They had to have someone on the inside feeding them information and so Jerry found a guy he thought could be the mole.

There was a bank teller whose fingerprints had been found inside the vault and that was unusual because no one had been allowed into the vault that day and that specific teller had no reason for going in there. But no matter what they did or said, they couldn’t get Bobby Akamu to talk and so they concentrated on the security cameras. The cameras had shown the men breaking into the vault and one of them had been the “cop” that McGarrett had shot earlier. So that told everyone that the men had gotten away by putting on HPD uniforms and blending into the crowd when cops had flooded the scene. And so McGarrett hadn’t murdered one of his own.

He thought he had for a while and that had made him feel guilty. But finding out the truth had cleared his conscience and he had gone back in to question Bobby when he and Lou found someone else had gotten there before them. The robbers had apparently used their cop uniforms to sneak in and kill Bobby. So the guys knew they must still be nearby and had eventually met up with them on the street when a shoot-out occurred. Five-0 had had to defend themselves and they managed to stop the others from getting away, but what they also found was the cash. The cash had still been in the back of their car and so Five-0 had been able to retrieve even if they couldn’t trace it.

Tani, however, had realized that she needed to come clean about what she did for her brother because she had felt bad about Lou covering for her. So Tani asked McGarrett if they could talk and she was planning on telling him everything while her counterpart Junior was at home watching old prom videos of him and Layla.