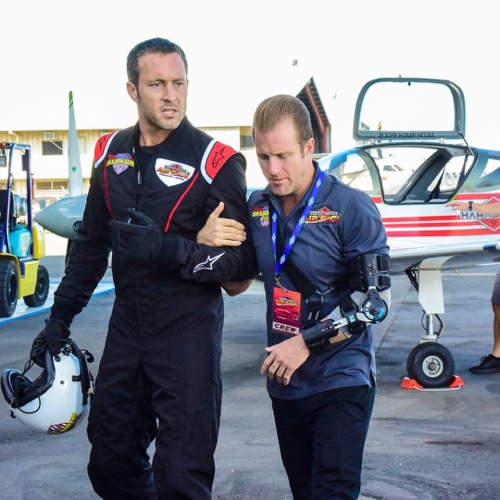 Tonight on CBS Hawaii Five-0 air with an all-new Friday, December 1, 2017, episode and we have your Hawaii Five-0 recap below.  On tonight’s Hawaii Five-0 season 8 episode 8 “He Kaha Lu’u Ke Ala, Mai Ho’okolo Aku” as per the CBS synopsis, “McGarrett poses as a pilot to investigate the cause of a plane crash that led to the death of a pilot in an air race.”

An old friend of McGarrett’s had come to Hawaii for an Air Race and had asked to see him on tonight’s all new episode because he needed a favor.

Ronnie Turner had known McGarrett from his Navy days because he used to work as mechanic on base. But Ronnie has since gone into the private sector and he continues to work on aircrafts by getting involved in the racing scene. There were now teams that raced courses by flying through the air and a lot of pilots become known that way. So Ronnie had wanted to speak about one of those pilots.

He said he worked with a young man named Jason that had been one of the best pilots he had ever seen and he brought Jason to McGarrett’s attention because Jason had recently died in an airplane crash however Ronnie didn’t think it was an accident.

Ronnie said that Jason was too good to make mistakes and so he feels that something must have been done to cause Jason to crash. But there was already a federal investigation into the accident and it had been ruled an accident. So McGarrett had stepped on a few toes when he decided to look into the crash and had brought certain findings to light.

He said what the feds put on paper didn’t seem plausible and then he tricked the leading investigator into revealing that he didn’t really know much about planes. And so McGarrett found himself quickly escorted away from the plane, but what he wanted to know was if it was an accident then why was there a rush to close the case.

The case required further investigation. But the feds hadn’t seemed like they cared about Jason or what really happened to him. So McGarrett had eventually turned a favor for a friend into a case for Five-0 because he brought them all in on what he found and had asked for their help in finding what he was missing.

He had watched a video of the accident with the team and the crash had appeared to be suspicious because there had been no evidence of distress until Jason crashed. And so Jerry brought up the “S” word. He said it must have been sabotage and everyone had rolled their eyes though McGarrett had taken what Jerry said seriously.

McGarrett told the others that these air races had huge prizes for the winners and so someone could have gotten tired of Jason winning all the races. But the others had been skeptical and so McGarrett had gone to question Jason’s loved ones to finding out if he was having any problems. So McGarrett hadn’t found out much and hearing what a wonderful guy Jason had been had also been tough on Tani. Tani had been upset about the loss of life and McGarrett didn’t take her to task for it because he told her that it was only right that she care. And so McGarrett was offering up words of comfort when he heard from Ronnie.

Ronnie had found the technician that checked Jason’s plane before the flight and he ended up holding the man when he learned the technician had also found the missing trim tab, but hadn’t told anyone he found it and so that made Ronnie believe something had been wrong with the tab. But somehow the NTSB had found out Ronnie had gotten it and had confiscated before McGarrett of his team could check it out. So they instead had to turn to the technician and so they questioned Isiah Phillips on what he found. They figured he must have found something because he had also been a technician with another air racing contest and two people had crashed that time.

But Isiah said those last two accidents had occurred because the trim tabs had been made of alloy and had melted. So they were different than Jason’s tabs because Jason’s had been of much sterner steal and so the only way for Jason’s plane to go down would have been sabotage. Isiah believed he had found evidence that showed sabotage and so McGarrett was trying to figure out how he could get that evidence back when he saw the news. The news had showed Agent Callaghan of the National Transportation Safety Board confirming that the crash had been pilot error and that the crash had officially been ruled an accident now that they found the trim tab.

So McGarrett knew for a fact that Agent Callaghan was covering something up though it turns out their victim hadn’t been squeaky clean either. Jason Sachs hadn’t been the real Jason Sachs. He simply assumed the identity of a dead person he looked like and he had done so because he had been on the run. He had worked for Juan Camilo and the cartel by flying drugs over the border. But then the DEA found out and they flipped him. They turned him into a C.I. and he had worked for them a couple of years before he asked to be allowed to leave the cartel. And so he eventually went on the run when he realized the DEA were never going to let him go and he had taken Camilo’s daughter, Elena.

Elena had been interviewed by Five-0 and she hadn’t told them about who Jason or who she really was. But when they went to go talk to her again, they had found her hotel ransacked and had known that her father must have given the order to have her brought back to Mexico with her son. So the team quickly rushed to find Elena and they found her being held in another hotel room by one of her father’s men. And so Elena and her son were rescued, but Agent Callaghan had been arrested for attempting to cover up Jason’s murder. He had tried to get out of it by accusing them of stealing federal evidence except Tani didn’t really steal it.

It had actually been her brother that stole the trim tab and so Callaghan had nothing.