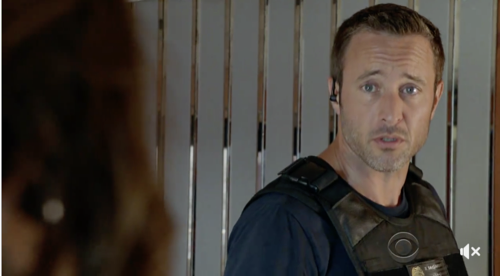 Tonight on CBS Hawaii Five-0 air with an all-new Friday, December 8, 2017, episode and we have your Hawaii Five-0 recap below.  On tonight’s Hawaii Five-0 season 8 episode 9 “Make me kai (Death at Sea)” as per the CBS synopsis, “When investigating a deserted yacht adrift at sea, McGarrett, Danny, Tani and Junior are exposed to a deadly bioweapon and the rest of Five-0 have only eight hours to find an antidote.”

A woman was found drifting in a life raft on tonight’s all-new episode “Hawaii Five-0” and no one knew where she came from or what happened to the others that had been with her. But what they did know was the woman’s name. She was Monique Sims and she was also quite big on the social scene in Hawaii because she owns her own PR firm as well as sits on the board of trustees for many charitable organizations. So the team knew that someone like Monique must have come from a party and that she could have gotten on the raft to escape someone or something however they couldn’t understand what happened to the boat she must have fled.

They checked with the coast guard and there hadn’t been any signs of a boat in distress much less an SOS. But Jerry used satellite cameras to look for the boat and he eventually found one with bodies littered all across the deck. So that explained why no one went looking for help. The others had all died while Monique alone had survived by getting on the raft and so the team took the chopper to the boat to investigate what happened out there though they found something they really wish they didn’t. They found out the people on the boat had died because of a biological agent and that meant they were all exposed as well for getting too close.

But Noelani hadn’t left the chopper and that meant she as well as the pilot could fly back to the mainland with the sample of the bioweapon. So while McGarrett along with Danny, Junior, and Tani had to stay on the boat, the others took the sample and got it tested. It turns out that it was a combination of two viruses turned into one and the fact that it was man-made indicated someone on that boat had intentionally released the virus. The team thought about it and they figured it could have been a test run for say something much bigger. And so the only person that could be of any help was Monique.

Monique eventually came around at the hospital and she had appeared to be free of the virus, but no one knew why until they talked to her. Lou and Adam who was an acquittance of Monique’s had gone to ask her about the party and she told them everything she remembered. She said she had been in one of the cabins lying down when she heard a commotion from up on deck and had looked out to see Marko pointing a gun at everyone. But Five-0 checked the guest list and they didn’t find a Marko. So Monique explained that he had been an old friend of Nathan’s and had gotten dropped off on their boat after they had already been in the sea.

So Monique claimed no one knew Marko besides Nathan and that she hadn’t gotten the chance to get to know him because he had kept to himself on the boat. But she said that she decided to get out of there once she saw the gun and that she took the raft hoping to make it back to the mainland when she tired out yet a few things didn’t add up with her story. Monique wanted everyone to believe that running away so quickly meant she hadn’t been exposed to the virus except it hadn’t been Marko that pulled a gun on the others. It had been the others that pulled a gun on him because they had realized by then that he had infected them with something.

The symptoms on the virus were dizziness, fever, and pain. But if they came to the conclusion that Marko was responsible then they must have all been experiencing symptoms while he wasn’t. So there was an antidote to the virus and only two people hadn’t been infected – Marko and Monique. Monique had been on the boat when everyone was exposed to the virus and had still been alive after everyone died. So Jerry checked out her financials and he found several shell companies all leading back to her however someone had recently paid her half a million from an account via the Cayman Islands. Meaning she had gotten paid to bring Marko on the boat.

Marko hadn’t been Nathan’s friend and his name hadn’t even been Marko Joseph. His real name was Andreas Koslov and he had used to work on biological weapons in the Ukraine before leaving without a trace as well as several vials of material he had been working on. But McGarrett and the others had found the vials still on board in a case that Koslov had with him when he died and so Monique’s one part in all of this was to be his go-between. She got Koslov on the boat and was supposed to bring the goods to whoever was paying her, but she left them and so the buyer demanded all his money back.

Monique was told that she had to pay back every cent and she couldn’t do that. But running only meant Lou and Adam had had to chase after her. So the guys found her trying to make a run for it with all the cash she had in her possession and eventually catching up to her meant they got answers though getting a vaccine to their friends that were slowly dying proved to be the tricky part because a storm had put everyone at risk. Lou had been forced to take a chopper through horrible conditions to get the vaccine out to the boat and even then the line to sending it down had snapped.

But both McGarrett and Junior were able to get to the case and it was long after they took the vaccine that they all started to feel like their old selves.