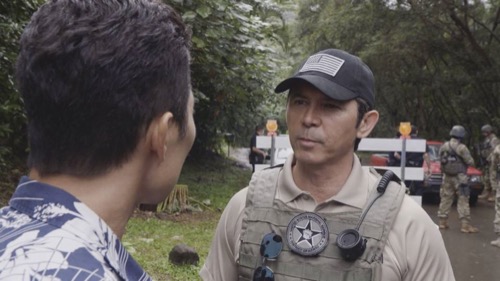 Tonight on CBS Hawaii Five-0 air with an all-new Friday, January 20, 2017, episode and we have your Hawaii Five-0 recap below.  On tonight’s Hawaii Five-0 season 7 episode 14 as per the CBS synopsis, “Five-0 must negotiate between the law and local customs when a man wanted for murder escapes capture and seeks asylum in sovereign land belonging to the Nation of Hawaii.”

McGarrett was supposed to be doing his driver’s test. He had gone to the DMV and an unfortunate woman had gotten into his car to judge him on his driving. But McGarrett had later broken all of the rules when he ran through yellow lights and had even accepted a phone call in front of her. So McGarrett had probably failed his driving’s test right then however he had also gotten assigned to a new case after Duke had personally called him about the problem. The “problem” was a man named Kahnua Noe. Kahnua Noe was a suspect in a murder case and he had apparently fled authorities before seeking asylum on the sovereign land of the Nation of Hawaii.

Hawaii as it turns out has two sides to it. There’s the side that belongs to the United States and another side that firmly belongs to the Hawaiians. However, the two nations technically have an agreement in place. The US respected the Nation of Hawaii and the Nation of Hawaii respected the United States. So McGarrett and his people couldn’t go on sovereign land until the other government allowed them to cross the boundary yet they had been told that wasn’t going to happen. The Nation of Hawaii had given Kahnua asylum because they believe he didn’t kill Lance Akemoto.

Yet, there was lot of evidence to refute. Kahnua and Akemoto had once been partners and they had burglarized many homes together, but eventually they were caught and Kahnua got seven years in jail while his partner got off on a technicality. So Akemoto hadn’t gotten any jail time and he had supposedly turn his life over to god even as his former partner rotten away in the jail. And so Kahnua could have been resentful as well as many other things. His problem on the other hand was that he lied to the cops. He told them that he hadn’t been in contact with Akemoto and then later told Chin in confidence that his story hadn’t been true.

Chin had known practical everyone in the other nation and so they had allowed him to come on their land as long as he didn’t have his weapon. So Chin had gotten the chance to talk to Kahnua in person and the other man had admitted that he had been speaking with Akemoto. Akemoto had allegedly offered to lend Kahnua the money he needed to start up his own business and Kahnua had no idea if Akemoto had told anyone else about their arrangement. But Kahnua still claimed that he was going to get money from the other man and that had looked bad for him.

It had looked like Kahnua was demanding money for what he was “owed” when he got locked up and it especially hurt him that he didn’t have an alibi for the night Akemoto died. Though McGarrett had promised the village that he wouldn’t set foot on their property until they found Kahnua guilty without a doubt. So McGarrett and his people had been handling just fine when out of nowhere the feds showed up. The feds and the agent in charge had wanted to steamroll the village in order to get to Kahnua and Deputy Lincoln hadn’t seem at all concerned that he was breaking another nation’s sovereignty by threatening them.

However, there was no reasoning with Lincoln. He had been told that the Nation of Hawaii was hiding a murderer and so he had told McGarett that he had until sundown to solve the situation before he stepped in, but Lincoln had decided to provoke the Nation of Hawaii in the meantime. He had shut off all cellular service, he cut off their water, he cut off the electricity, and he refused to allow anyone from the other country to enter the US until they have handed Kahnua. So Lincoln was pushing for a bloody conflict and there was nothing Five-0 could do to make him standdown. They had been looking for evidence that could exonerate Kahnua and they couldn’t find any.

The guys had raided the storage locker that Kahnua had bought under a false name and they had found several stolen items inside. So Kahnua hadn’t given up his old lifestyle and he had apparently had a gun in the storage as well however he had claimed that he hadn’t told anyone that was stealing again because he didn’t want the village to turn him over to the feds. Yet, what he did had made him look guilty and he wasn’t helping himself by continuing to lie to law enforcement. Chin had thought he was guilty once he heard about the gun and he wanted to turn him over himself.

What stopped him though had been the villagers. Bumpy was the guy in charge and he had known Chin since Chin was a kid. So he had tried to tell Chin that he couldn’t turn Kahnua over until there was concrete proof that Kahnua was guilty because that was the right thing to do and Chin didn’t want to hear it. Chin had seen the feds gearing up to attack the village with snipers and all he wanted to do was resolve the conflict before anyone got hurt. But McGarrett and Danny had found something down the line that exonerated Kahnua.

The guys had found out that he had been forced to steal again because his boss at the hardware store was threatening him. The boss was unfortunately the brother of Kahnua’s parole officer and he told Kahnua that he would report him to his brother if he didn’t get what he wanted. So Kahnua had begun stealing again and his old friend had found out about it. Akemoto had found out that Devon Berris was forcing his friend to take great risks and so he had tried to get Kahnua his freedom back because he had felt guilty that Kahnua had served seven years while he got off. And so it was Devon Berris that ultimately killed Akemoto.

Akemoto had confronted him and had tried to plead to the other man’s better half yet Devon had gotten greedy and hadn’t wanted to lose his cash cow. So he killed Akemoto and then tried to frame Kahnua for it. However, Devon had made the critical mistake of going to see Kahnua to get him to take the fall because Five-0 had already been alerted and so Chin finally got to put an end to everything when he arrested Devon for Akemoto’s murder.

Though what the feds did had been a close call.