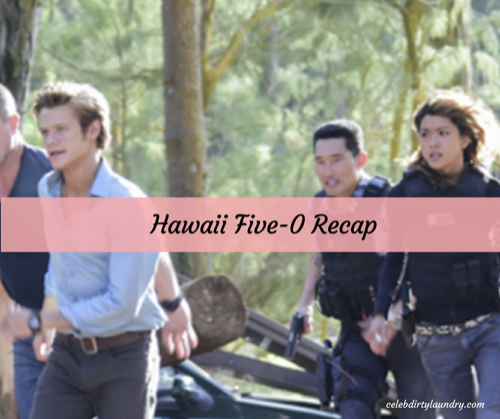 Tonight on CBS Hawaii Five-0 air with an all-new Friday, March 10, 2017, episode and we have your Hawaii Five-0 recap below.  On tonight’s Hawaii Five-0 season 7 episode 19 as per the CBS synopsis, “McGarrett (Alex O’Loughlin) and Kono (Grace Park) suspect that an abused girl may be the victim of a sex trafficking ring on the island. Meanwhile, Chin and Grover investigate a murder at a sober-living facility.”

Tanya Morrison came into the hospital one night with bruises all over her side and so the nurse had become concerned. She had tried to ask Tanya about it however Tanya’s uncle refused to let his daughter answer the questions and chose to answer them himself. But that had only gave the nurse even more of a reason to worry. Anna had seen situations like Tanya’s before and she knew that it never ended well. So she had tried to ask the uncle if he would be more comfortable out in the waiting area where he could get himself tea or coffee and he had turned Anna down. He said he was fine and that he would wait with Tanya.

However, Anna had known to trust her gut and so she had excused herself from the room because she had wanted to alert HPD. She said that a child was possible being abused and the injuries Anna had told her that something was going on at the young girl’s home yet, when Anna had gone back to the room, both Tanya and her uncle were gone. They had felt through the side door and Anna had caught sight of them driving away. So Anna had decided to call in a favor from an old friend because she had wanted additionally with finding Tanya and didn’t think HPD would go out of their to find one girl.

So Anna’s phone call to Dr. Noelani Cunha had gotten someone to take Tanya’s case seriously because Noelani convinced Five-0 to hear her friend out. Kono and her friends had gotten involved with in the case and they had tried to find Tanya. Yet, Five-0 knew that Tanya Morrison might not be the girl’s real name and so they had tried to run a facial recognition on the guy that claimed to be Tanya’s uncle though they ended up getting nowhere. The “uncle” wasn’t in the system and so McGarrett suggested they run a facial recognition on Tanya because he had a hunch and that hunch paid off.

Tanya’s real name was Moani Amosa and she was reported missing six months ago. Though the police had suspected that Moani had run away and so they had long given up on looking for her, but the fact she showed up at a hospital with injuries and with a strange man claiming to be her uncle meant the girl was in some sort of danger. So Five-0 looked into her and Eric had found out what had happened to Moani. Moani had apparently met a guy online that said his name was Jonah and the two had been trading messages back and forth when Moani eventually sent Jonah her picture and he had asked to meet.

Moani however hadn’t taken a second to think about it because she had been excited about meeting him in person. But Eric had found where Jonah was sending the messages from and he said they were coming from an abandoned house. So he thought Jonah was a squatter and that meant that Jonah might have moved on since he targeted Moani only Kono and McGarrett did find a few things indicating that whoever was staying there had left in a hurry. And they had also seen a padlock on the closet door so they had checked out and had found a young girl tied up in there. But she hadn’t been Moani.

The girl’s name had been Kelsey and she had also been a local girl that was believed to have runaway. However, she had been kept close by and trafficked. Kelsey said she had been introduced to Emilio by a woman claiming to be a modeling scout and she thought she had fallen in love with him. He was older and more experienced so she loved him even as he started to pimp her out to his friends in the beginnings because he said they needed the money to start over somewhere else. So from there he started to pimp her out to tourists then a few locals and he had kept her in line from running away by threatening their families yet he had also used physical violence against her and the other girls.

Kelsey had said that there was three of them and that Tori who was the one that watches them had made them pack in the night when they found out that Moani was not coming back. Yet, Kelsey had gotten locked in the closet because she had mouthed off to Tori and had gotten punished for it. So Kono had broken down a little bit when she had heard Kelsey’s story. She had apparently let the story get to her and that had caused her to lash out. Kono had broken the guy’s behind her car window after he annoyed her by continuing to honk her and she had done much worse to the swim coach that Kelsey managed to identify from a picture.

Though Kono had told McGarrett that she knew she needed to calm down and she was trying to. So he decided to overlook some of things that had been going on with her and together they took part in a sting that led to finding Tori, but Tori was willing to turn on her boyfriend if she got a lesser sentence and so she gave Five-0 the address to the house. The house was another abandoned shack they were staying in and the girls had been locked up in one of the rooms though Jonah/Emilio had tried to make a run for it. And Kono had caught him before he could get very far and she had nearly beaten him to death.

So her excuse was that he had a knife and she conveniently forgot the part where she told him to pick up the knife because she had wanted it to be a fair fight. But the people involved were going to jail and Lou and Chin had even closed another case in the meantime in which a couple of drug dealers were robbed and killed because the other guys had wanted to ransom back the drugs to the supplier however the supplier had actually been a friend one of those that died and he had wanted revenge for that. So he brought in Five-0 to help tie up some loose ends.

And while it may take some time to fully get there, Moani was doing a lot better in the weeks following her rescue and Kono had even become a valued friend.