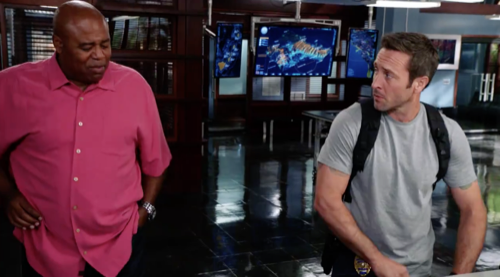 Tonight on CBS Hawaii Five-0 air with an all-new Friday, January 6, 2017, episode and we have your Hawaii Five-0 recap below.  On tonight’s Hawaii Five-0 season 7 episode 12 Winter Premiere as per the CBS synopsis, “Chin (George Takei) is kidnapped by a cartel in Mexico and Five-0 races to rescue him before he is executed by his vengeful abductors.”

Chin went to Mexico to save his niece Sara. Sara’s maternal relative had gotten custody of she and she had been living a normal life until one day she had been kidnapped. But the price the kidnappers were demanding hadn’t been a ransom. They hadn’t wanted money because they had taken the girl in order to lure Five-0 down to their territory. So Five-0 had fallen into that trap and they had nearly died for it however by sheer luck they had survived and Chin had had to think about that afterward because his actions had affected others. And so Chin had decided to turn himself over to the cartel to get Sara back and to keep his team safe.

However, his friends and family were never going to stand by while Chin was murdered. So they did some kidnapping of their own. The team had kidnapped a member of the cartel and they had “questioned” him over several hours until he finally revealed one of Carlos’s favorite properties. Carlos had had this place where he enjoyed taking prisoners and that’s where he apparently served his honor guests to his dogs though he never managed to do that to Chin. Chin had bene close to death, but his friends had showed up at the right time. They had stormed in guns blazing and had rescued their friend.

So Chin had had a lot to be thankful for. He had gotten Sara to safety and he had also managed to take down a cartel by sicking Five-0 on them. Yet, Chin had thought he was going to have to say goodbye to Sara again and that had almost ruined him. Chin had grown close to Sara and had loved the little girl as if she was his own daughter however Sara’s aunt and uncle had thought things over and they eventually decided that Sara should live Chin. He had made an incredible for the little girl and the couple had realized it. And so they gather up the documents and legally gave Chin custody of Sara. Making him a parent now!

Chin however, loves being Sara’s parent. He enjoyed everyday with her and had kept a close eye on her even when he was at work. Though Five-0 did get another case as soon as they had gotten back. The guys had noticed that Jerry was living in their office and that he had also slept eat some of Steve’s doughnuts. So the guys had said they would help Jerry move and then later they tried to figure out why Steve had gotten the donuts so that answer to that had been bribery. Some guy that interviewed for the coroner’s job had thought that sending Steve doughnuts would help him get the job.

The doughnuts though had had the opposite effect. Steve had nothing to do with the new coroner’s job and Max hated bribery. But Max did tell Steve why they needed another coroner. Max had said that the work was overloading and that he had to come in on Saturdays because it was so busy. So Steve and Lou had asked about the latest case that Max was working on and they wanted in. The victim’s name was Mitch Lawson. He was car salesmen and someone had managed to use his keycard to work after his death. And so the team eventually investigated why someone would kill Mitch and even use his key card.

It just hadn’t made much sense to them. However, Lou had said that car salesmen were brutal to question. He thought that they could talk any sane person into seeing their way and so Steve thought Lou would be perfect to go in undercover. Lou went to work at Pacific Motor Sales as the latest hire and he had quickly come to learn who did and didn’t have a grudge with Mitch. So Lou had thought that Paul was their guy and as it turns out Paul had a solid alibi for the whole night, but Paul had information for Five-0. He told them that Mitch had been on the phone with someone on the night he died and he had been screaming because he was so mad.

So Five-0 tracked down the person that Mitch was talking to and it was the dealership’s stock manager. The guy had gotten yelled at because the car that Mitch ordered had come in and another salesman had sold it from right under Mitch. Yet, the killer hadn’t been so big bad threat. He had simply been Bob Mason who had offered to give Mitch’s the commission from the sale because he saw his coworker had gone ballistic and who had been turned down. Mitch had wanted the car to be returned for his client and that was both impossible as well as erratic. And so Bob had been forced to defend himself when Mitch refused to wait for a new car and then he had tried to dump the body.

Though it doesn’t matter what happened. The fact was that Bob had killed Mitch and Bob was going to prison yet later Lou had thought about the case and he didn’t understand why Mitch had lost it. So they looked into Mitch and they found out that he had been selling the same color, make, and model for the last few years to the same person. He had been selling it to a member of the KFS Syndicate. And so Five-0 had thought that Mitch was dealing with drug trafficking and they had tried to locate the new owner that had bought the car from Bob though it had been too late. Another syndicate member had found him and had killed a police officer as well as the poor guy that bought the car.

The car had been gutted and Max had ended up finding radioactive residue still inside. So that’s why Mitch and the syndicate desperately wanted the car yet there wasn’t a place on the island that they could run that Five-0 wouldn’t find them. But the raid carried out on the syndicate had had to be carefully handled and so the team risked their lives in order to save the island from radioactive material from getting out however in the end the suitcase they had found had already been emptied. And so it’s still dangerous on the Island and unfortunately they were losing an honored member of the team.

Max had looked for another coroner because he wanted to go back to Africa and continue to help the underprivileged, but will he still go with the Island at risk?