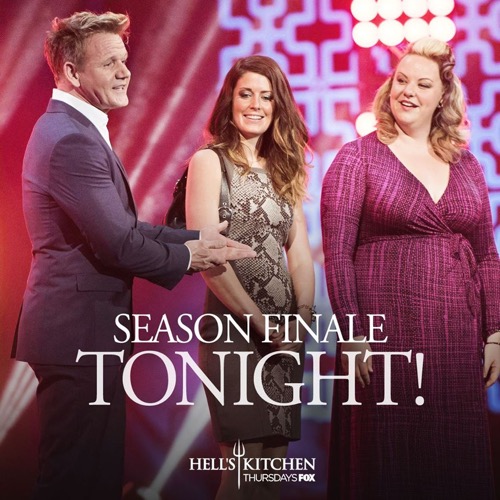 Tonight on FOX their Gordon Ramsay culinary competition series Hell’s Kitchen airs with an all new Thursday, February 2, 2017, season 16 episode 16 finale and we have your Hell’s Kitchen recap below. On tonight’s Hell’s Kitchen season 16 episode 16 episode called, “It’s down to the last two in the Season 16 finale, which finds both chefs working on their menus for the last dinner service. Included: They are treated to makeovers before being surprised by actor Rob Morrow. Also: The contestants cook for MLB player C.J. Wilson and actress Andrea Roth.”

Hell’s Kitchen’s season 16 episode 16 begins tonight with Heather and Ryan in the finale. Chef Ramsay tells them to enjoy the moment for being the final two, and may the best woman win.

With 36 hours to go for the final dinner service, Sous Chef Andi and Aaron deliver breakfast to the dorm. Aaron works with Ryan while Andi works with Heather for their menus. Chef Andi tells them Chef Gordon Ramsay is treating them to a make-over, new outfits and then taking them to a musical; they have 15-minutes to get ready.

Ramsay arrives, saying they both look incredibly beautiful, they get into the limo as he asks if they have ever been to a musical. They are brought in backstage to meet Rob Morrow, Actor from Northern Exposure and Numb3rs.

Gordon knocks on the dressing room door which lifts the walls and they are on the stage themselves. He reveals they are not here to see the show, they ARE the show. They are given one hour to create 4 stunning dishes: 1 appetizer and 3 entrees (Fish, Beef and Chicken). Chef has a surprise for them when they are done cooking their dishes.

The winner of each round will get to choose one of Hell’s Kitchen returning chefs right there for their final dinner service. (Koop, Shaina, Wendy, Devin, Andrew, Kimberly, Paulie, Heidi).

Walter Manzke, Owner of Republique will help Chef Ramsay with the appetizer dish. Heather wins, choosing Andrew right away. He promises to not let her down and together they are going to win this competition.

Michael Chimarusti, Owner of Providence will help Chef Ramsay judge the fish entrees. Again, they were both very strong efforts but Ryan wins this round. She chooses Heidi because she trusts her 100%. Heidi doesn’t feel Heather should be in the finals.

Susan Feniger, Chef and Co-Owner of Border Grill will help judge the beef entrees. Both dishes are very good and interesting but Heather wins. She chooses Kimberly, even though Andrew wanted Paulie.

Juhnn Kunkel, CEO/Founder of Yardbird (the restaurant the winner will be executive chef) helps judge the chicken entree. He agrees that both dishes could be on the menu at Yardbird, but chooses Heather’s dish. She picks Shaina. Ryan picks Paulie. Heather picks Devin, which means Koop and Wendy will be on Ryan’s team.

Back in Hell’s Kitchen, Ryan begins to take charge and delegate tasks to her team, but right away Paulie gets defensive with her. Meanwhile Heather prefers to put out the menu and asks her team where they would be most comfortable. Andrew is right away overbearing and some feel he will be a distraction for the team.

Andrew is acting like he will ride Heather’s coat tails to Las Vegas, the team jokes about seeing money in his eyes and them getting married. Paulie is already not liking that Ryan is taking control, complaining that if she wins she gets $250,000 and he gets nothing, so why is he even wasting his time?

Chef Ramsay is surprised she called out two 4-tops at the same time. He tells Heather her timing and brigade are terrible and she needs to get a grip. Meanwhile Ryan is already fed up with Paulie not listening nor answering her.

Paulie brings up ice cold meatballs and Ramsay asks him if he is sabotaging her. He says he is trying his best, but he doesn’t care if they lose or win. He complains that its not like she will share any of the winnings, but says he won’t let the ship sink. Appetizers are done and Chef Ramsay tells Heather and Ryan they were neck and neck, but they need to pull it together during the entrees.

Shaina brings up cold fish and the sides have no salt nor pepper. Kimberly is told to fire up new steaks as they were raw. Chef Ramsay brings Heather into the back room, wanting to know where the strong girl was that ran the pass. He tells her now is the moment of truth, if she really wants to go to Vegas. He says her team is running her down and she deserves better.

Kimberly is screwing Heather, who already sent out two of the dishes for the 4-top; she again gives her raw steak. Ryan is having the same issue with Wendy who is serving her raw salmon. Kim finally gives Heather a good entree and they bounce back. Paulie tries to help Wendy with the fish but Ryan tells Koop to take over the fish station and Wendy can do the meatballs. Chef Ramsay tells her it was a good move.

Back in the red kitchen, Kimberly brings up raw meat again and Chef Ramsay wants to know if Heather can do the honorable thing. Heather orders Devin to take over and Kimberly needs to do desserts. It appears Heather made the right decision as both kitchens are finishing their final tickets.

Chef Ramsay wants to examine the customer comment cards, and when he has his decision he will call them back. He tells Ryan that her creativity has been so strong across the entire competition and 3 times her dish was ranked top dish overall. When she is on her game, she is a tough cookie to beat.

Heather is told she has been the most consistent performer in Hell’s Kitchen. It is clear she has a great palate and she is the first chef to earn the black jacket. He has made his decision and asks them to go to the doors, and the person whose door opens is the winner.

Ryan’s door opens and she is the winner of season 16 of Hell’s Kitchen!!

“Early on I challenged Ryan to find her voice, and once she proved to me she could command a kitchen, there was no stopping her. She has the tenacity, drive and skill that will make her a great head chef at Yardbird Southern Table and Bar at the Venetian Las Vegas!”