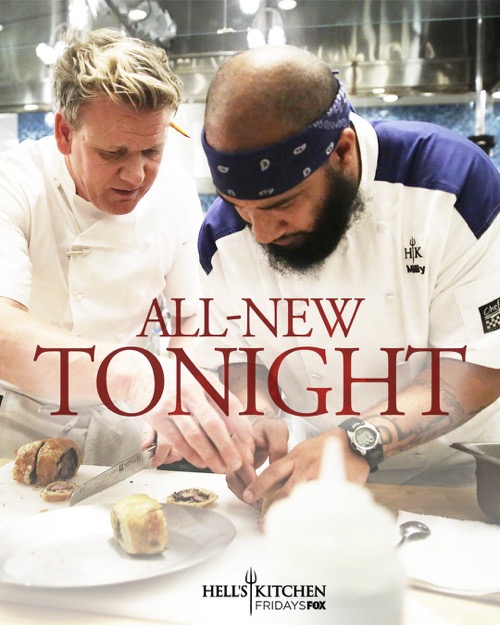 Tonight on FOX their Gordon Ramsay culinary competition series Hell’s Kitchen airs with an all new Friday, October 13, 2017, season 17 episode 3 and we have your Hell’s Kitchen recap below. On tonight’s Hell’s Kitchen season 17 episode 3 episode called, “Tower of Terror,”  as per the FOX premiere, “The chefs must complete a four-tiered shellfish tower with “fast hands.” The first team to finish is rewarded with a glamorous day in Malibu, while the losing team must prep for a massive fish delivery. During the dinner service, Chef Ramsay sends multiple entrees back to the kitchen and temporarily kicks out one of the All-Stars.”

The top 15 All-Star chefs are busy fighting in the dorms after Ben was sent home; Robyn and Elise argue when Robyn calls Elise a bitch for calling her out on only doing the Wellingtons as Elise did all the other proteins. Manda helps bring Robyn out of the room, so the fighting will stop; others wonder why the team just can’t work together as strength is in unity.

The following morning, the chefs are up early and ready to tackle the next challenge; Chef Gordon Ramsay welcomes the chefs back, Josh rushes off to vomit in one of the kitchen garbages. When asked what is the one quality that every talented chef must possess – Josh says a great palate. Nick says leadership. Dana says imagination; Ramsay says all good answers but at the core a chef must be good with their hands, and that is what today’s challenge is all about.

Chef Ramsay introduces the chefs to a young Matthew, who is master at cup stacking. When the chefs are impressed and say they didn’t pay close enough attention, Ramsay calls in Sous Chefs, Christina and Jocky, informing them he wants one chef from the red team and one chef from the blue team to stack an amazing tower, and the chef who finishes first wins a huge advantage for their team. It’s Michelle for the red team and Jared for the blue team; Michelle won her team a 30 second advantage in the next challenge.

They will be building a tower of a much different kind. It is a seafood tower with 4 tiers, the bottom tier is 6 Santa Barbara Spot Prawns, and 2 lobsters, the second tier is Oysters and the third tier is razor clams along with Alaskan King Crab and the top tier is sea urchins, manila clams with caviar on top. The first team to complete all 4 tiers wins.

Ashley and Manda are up for the first tier while Van and Gio are up for the same tier. Red is done tier 1 first. Michelle and Elise are against Ben and Jared for the second tier. Blue is ahead now, they are neck and neck when Nick and Josh are pitted against Dana and Jennifer. Blue is on final tier and quickly the red team is catching up. It comes down to Barbie and Robyn against Ben and Milly. Milly and Ben rush over with their tier and as Ramsay is inspecting their tier, the red team comes up with theirs; but he doesn’t need to see the red teams’ as Blue won again.

Blue team are heading down to the Ocean Club in Malibu with special guests that they won’t know until they get there. The ladies are going to be prepping 100 lbs. of seafood, after that they need to prep both kitchens ahead of dinner service. Barbie is reading off the invoice ordering them around, which cheeses off Manda.

The guys laugh at the girls, as they get in their rides going to Mastro’s Ocean Club; they are met by Chef Jocky and Maitre D Marino who tells them they are going to the beach to play some soccer. Marino introduces them to Alyssa Naeher and Julie Johnston, 2016 US Olympians. Back in Hell’s Kitchen, Christina gives the women a special lunch by Gordon Ramsay. Barbie is already holding the garbage can, as the others taunt her about the food, saying its worms, and legs still moving. Elise lies, saying she tried the food, she is going to smell their breath and is not playing. As Elise comes to the front of the line, Christina demands her to tell her the truth.

Christina asks Elise if she is lying, and tells her that Elise needs to take a bite while she is watching, it’s a team lose so team suffers. The men return with soccer shirts and soccer balls; they are ready to keep the ball rolling. As the red team is prepping the kitchen, Robyn notices the scallops ate cut uneven and her and Jennifer decide if it comes down to it, they will show Barbie under the bus.

Ramsay tells both teams he wants them to cook with their passion tonight and asks Marino to open Hell’s Kitchen. In addition to the regular menu Chef Ramsay has added a fresh seafood appetizer to be served table side by Michelle   and Giovanni (blue); Marino shows them how to make it.

The blue team’s day of bonding seems to be working well for them, their first 3 tickets are out, they have a strong start with rave reviews. Dana and Elise are keeping pace with their appetizers and communications but Ashley and Barbie are up for the entrees. Ashley says if someone else is being more vocal, let them lead. She stands back and drinks out of her bottle, but when Ramsay notices she is standing around idle, he tells Marino to take her to the bar because she’s clearly late for her date. She asks to go back and Marino tells her no. Barbie is forced to pick up the slack at the meat station, when her lamb hits the pass, he says it is beautifully cooked. They continue to attempt to stay in tune.

Back in the blue kitchen, Milly feels he has to be the rock for the team, and is quickly praised for the Beef Wellington. Milly wants to work as a team, there is great leadership by both Milly and Van who serves a perfect salmon. Manda is dragging the red team, as Barbie’s protein is done but there is no garnish. Robyn served raw salmon but blames it on Manda. Ramsay throws the salmon but tells Ashley to watch her nails.

Josh brings up the lamb and Ramsay says its perfect. Jared says he is teaching Josh to be the Master Baster. The blue team refuses to slow down while their team is rocking, pushing each other to hustle.

Barbie is talking to Chef Ramsay and orders Robyn to stop talking to her while she talks to Chef. Robyn needs to know because she has to time her salmon; everyone seems to basing everything on Barbie’s time but when it is brought to the pass, everything is wrong. Chef Ramsay tells them this is their last chance and is so close to kicking them all out.

The blue kitchen is driving to finishing service; they have no complaints from the dining room either. The ladies have finally delivered their refired order and are attempting to finish strong, hoping they can bounce back. When Chef Ramsay gets the order, he calls over the blue team to the red kitchen. He says the lobster wellington was so over cooked it has holes in it and he tells them to get the hell out!

The blue team takes over as Chef Ramsay meets them in the hallway, saying this service was worse than the previous night. He asked for compassion, dedication and for them to get in the game and they can’t even switch it on. He orders them to get upstairs and come back with two names, calling them “Disgusting!”

Robyn says Barbie is the one who sunk the team, meanwhile the men have given Gordon Ramsay the second all-star service in a row. The women bicker over who was the worst and who was dragging the team. Manda says it was Barbie, and several feel that Ashley didn’t do anything because Barbie was doing it all. It is brought up that after Barbie was asked to be more accurate with her timing, she yelled at Robyn that maybe she should learn how to cook fish. The women agree that there shouldn’t be any arguing in the kitchen; Robyn wants an apology; Barbie says, “I’m sorry, that you can’t cook fish!” Robyn walks off hating Barbie’s eyes.

Back in the dining room, Chef Ramsay chastises the women for their horrible performance. Barbie says Robyn is their first nominee because she can’t cook fish and the second nominee is Barbie, herself. Dana says there is no team effort and Barbie was nominated for the bickering. Ashley also had votes because she didn’t do enough and Manda also go a couple.

Ramsay calls all 4 women forward, saying they are spoiled for choice; they each plead their case on why they should stay. He comments on how Ashley looks better at the end of service than she does at the beginning, too pristine for someone working hard in the kitchen.

Chef Ramsay tells Barbie to get back in line, calls Ashley forward, tells her to take off her jacket and leave Hell’s Kitchen because tonight he didn’t see any fight, she seemed disconnected and looked lost from the beginning of service to the end of service. He orders Robyn and Manda to get back in line and get out of there. He turns to the blue team, asking if they are waiting for hot chocolate… telling them also to screw off.

“Ashley spent more time staring at her watch, than paying attention to her station; and so her time in Hell’s Kitchen is done!”