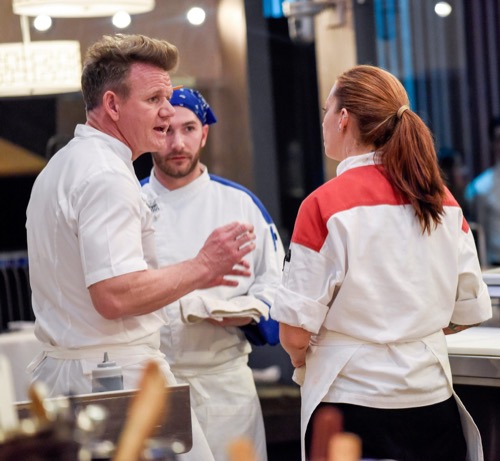 Hell’s Kitchen begins tonight with Chef Gordon Ramsay informing the remaining 6 chefs he is turning things up. Andrew and Heather are acting like they are totally in love; Ryan is enjoying making fun of them being all mushy.

The following morning the chefs arrive in the dining room where Chef announces he will be awarding black jackets. He shows them the black jackets to inspire them. He brings in their families to remind them who they are playing for; everyone shares an emotional reunion and Chef Ramsay tells them to enjoy their time with their loved ones.

After they say their goodbyes, Ramsay informs them he has designed 3 unique challenges and there will be 2 winners in the first challenge and both of those chefs will receive their black jacket; same for the second round. The last round will have the remaining 2 chefs competing for the final black jacket.

The first challenge they have to make their own unique dish, using the ingredients under the dome. There are 6 ingredients under each dome, and they are to grab one and begin cooking, when the bell rings they are to go to the second dome, the same goes for the other remaining dome. He will taste each dish, one at a time, then he will reveal the winners.

Kimberly is up first and she presents Cajun encrusted Tuna with rice. Chef says it is a good dish but it is a bit heavy on the Cajun seasoning. Paulie produces grilled Lobster with potatoes. Chef says the Lobster is lovely but it needs a touch of salt. Heidi brings duck with potato puree and parsnips. Chef says the execution isn’t perfect but the duck is cooked to perfection. He tells her a job well done.

Andrew’s dish is a pan-seared spiced filet and couscous flavored with beet and orange. Chef is not happy with the couscous as it is soggy but he nailed the filet. Ryan produces grilled hanger steak with quinoa. He tells her its a big plus on the protein but a minus on the garnish, saying it was as bad as Andrew’s couscous. Heather is last up in the challenge with a French chicken breast with rice and broccoli. Chef tells her it looks stunning and tells her he wouldn’t have done anything differently.

The winners of this challenge is Heather and Heidi, both thrilled to be part of the elite club of black jackets. Chef tells them they now get to spend the rest of the day in the Black Jacket Lounge and hands them key cards to get in. Inside the lounge is an open bar, pictures of this season and games to play.

Chef Ramsay has locked cases brought in. Inside the cases are identical ingredients and they must use all 6 ingredients; how they use them, where they put them or what they get out of them is entirely up to the individual chef. He tells them to think outside of the box. They have 30 minutes to create their dish.

Heather and Heidi continue to drink and enjoy the private black jacket lounge, waiting to see who is going to join them next. Meanwhile in the kitchen, with 5 minutes to go, Kimberly begins to fret over her burnt vegetables. Time is up and Chef is about to taste the next four dishes.

Kimberly is called up first. The dish is pan-seared and roasted salmon in a roasted eggplant, white bean and cauliflower puree. He tells her the salmon is beautifully cooked but isn’t impressed with the blended vegetables.

Ryan brings up her dish of seared salmon roasted eggplant, mushrooms mixed with the white beans and garlic and shallots. He is happy with the perfect salmon and the puree is delicious but the eggplant is soggy.

Andrew presents his salmon dish with a big piece of roasted eggplant. Chef tells him it looks elegant and loves the colors. He has a big issue with the bitter eggplant, saying it looks like the eggplant came from different chef.

Paulie brings Chef a pan seared salmon with a white bean puree over roasted cauliflower. Chef tells him it looks amazing but the mushrooms needed a bit more cooking. He tells Paulie the eggplant is delicious. Back in the lounge, Heidi and Heather agree that Paulie and Kimberly are probably going home.

Chef says the challenge is close so he is digging into detail to choose the winners. Ryan and Paulie receive their black jackets and Ryan tells the girls that she doesn’t think Andrew is going to make it. They all celebrate in the lounge together.

The final challenge and last chance for Andrew or Kimberly to win their black jacket, Chef tells them he has decided to give them complete freedom. He has a fresh farmer’s market outside for them and gives them 3 minutes to shop for their ingredients for their defining dish and they must make two portions of the exact same dish. They have 30 minutes to cook those two portions.

Andrew brings up his final dish and it is pan seared NY strip with wild mushroom and crab bordelaise. He also has roasted Brussel sprouts and potato puree. Chef tells him the meat is cooked perfectly. Chef asks Andrew to taste it and he says it tastes good. Chef praises his sprouts saying they are the best he ever tasted. His protein he nailed but the puree is slightly goopy, other than that it was a very strong effort.

Kimberly’s dish is pan seared filet with a mixture of mushrooms, a red wine glaze, parsnip puree and asparagus. The filet is beautiful, mushrooms delicious but the sauce was too rich, puree was great but the asparagus was a little bland and a let down.

Chef tricks them and says the final decision is not going to be by him. The four in the black jacket lounge will make the final decision. Kimberly says she is screwed because they all hate her and love Andrew. Chef Ramsay makes it clear that they are not to reveal who made which dish. If it is a tie, Chef Ramsay will be the one to break the tie.

He tells them to head up to his office and he is going to see the chefs in the lounge. He brings the chefs one by one to taste the dishes. The four black jacket chefs stand in the dining room and are about to find out who will be the final chef to join them. Sous Chef Andi brings Andrew and Kimberly back, both telling the other not to cry.

Chef Ramsay makes the final decision, who jokes about giving them the vote and they gave it back to him. Chef chooses Kimberly to get her last black jacket. Chef tells Andrew that he knows he has a promising career in front of him and tells him it was a job well done. Chef tells the remaining chefs to honor their black jacket and prove they are worthy of it. Chef tells Paulie he is the last man standing, then laughs as Paulie walks into the oven.

“Andrew had three chances to save his life in Hell’s Kitchen. Like they say, 3 strikes and you’re out!”
~ Chef Gordon Ramsay