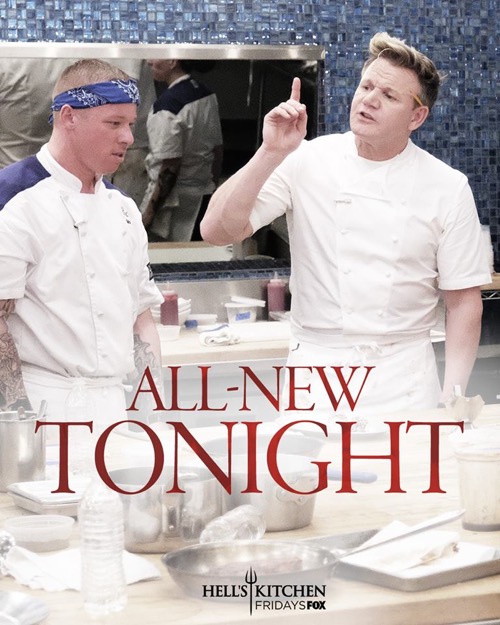 Tonight on FOX their Gordon Ramsay culinary competition series Hell’s Kitchen airs with an all-new Friday, December 8, 2017, season 17 episode 9 and we have your Hell’s Kitchen recap below. On tonight’s Hell’s Kitchen season 17 episode 9 episode called, “Catch of the Day,” as per the FOX premiere, “Special guest judge and fish-cooking expert chef Michael Cimarusti joins chef Ramsay, as the remaining contestants compete in a special challenge involving creatures of the sea. Then, during dinner service, the chefs aim to impress a host of VIP guests, including actor Aleks Paunovic, rapper E-40, professional dancer Cheryl Burke and actor Dan Bucatinsky.”

After Manda was sent home, leaving 10 All-Star chefs left. Michelle attempts to talk to Elise, who says she took responsibility for her own mistakes but Elise keeps “booping” her. Nick tells Elise to shut up, as she had said she was done arguing. Michelle keeps asking her who lied, as Elise says she isn’t there for friends, telling Michelle to bring that energy to challenge and maybe she could win a point! Michelle tells her to start worrying about herself; Barbie just wants the arguing to stop but the following morning the arguing continues as Nick calls Elise a “bully!” She “boops” him as Nick says they are going to say “Bye Felicia!” to her.

The teams gather outside, as Chef Gordon Ramsay asks who would like to go fishing. He says they will all be fishing but not in a boat. But rather inside Hell’s Kitchen’s very own lake; there are 5 different unique kinds of fish (Dover sole, red snapper, grouper, arctic char, and cod). There are names of ingredients on the lures, they are to have a quick meeting about who is cooking which fish and then follow Ramsay.

The chefs are to search for lures, with the ingredients to use with the fish; they are to hook the lure into the fish’s mouth and throw it to their teammate across the lake; each chef must continue to do this until they have 7 ingredients or time runs out. Dana is laughing so hard, saying this is probably the funniest thing she has ever seen; no one feels sorry for Elise as they feel it is karma and she only has 2 ingredients. Chef Ramsay says she will screw her team,

Back in Hell’s Kitchen, they have 30 minutes to make their fish dishes. Elise is complaining, saying she is at a disadvantage because she only has 3 ingredients. With less than seven minutes to go, Van flips his fish onto the plate and it falls apart, everyone on the blue team offers him help, really working as a team. He is frustrated but has another piece and determined that he can do it.

When time is up, Chef Ramsay tells them he is sending today’s winning team to Las Vegas. The guest judge today is Chef Michael Cimarusti, Owner of Providence. Battle of the Cod is up first. Jennifer Red) against Nick (Blue). Michael say it is a nice balance of salty and sweet. Ramsay says she nailed the fish, with the crispy skin on top. Nick removed the skin from the cod, which shocked Michael as he says he isn’t a fan of fish skin. Michael says he would definitely go with Jennifer.

Battle of the Grouper is next. Robyn (Blue) versus Michelle (Red). Michael says Robyn did a good job, loved the marinade and creamy avocado sauce. Michael warns Michelle when you do a big block of fish like that you have to cook evenly on all sides and gives the point to Robyn.

Battle of the Red Snapper is between Elise (Red) and Milly (Blue). Michael feels that Elise’s dish feels like it is actually two different dishes. She makes excuses saying she only had 3 ingredients and was at a disadvantage. Chef Ramsay tells Chef Michael that she did that to herself. Michael liked that Milly made cinnamon yams, saying he added so much flavor that it stays with you, giving the point to Milly. Nick says Elise can’t blame anyone but herself for having 3 ingredients and “boops” her repeatedly.

Arctic Char is the up next, with Benjamin (Blue) against Dana (Red). Benjamin is complimented on his presentation and the fish is cooked beautifully. Dana’s hash is delicious and the fish is on point. Michael gives them both a point, but the Blue is still leading by a point. It all comes down to the Battle of the Dover Sole.

Barbie (Red) versus Van (Blue) are up. Barbie is told she did a good job, with the fish and leeks. Van’s dish works and potato scales are awesome, but Michael has one question for him. He asks Van if he is feeling lucky? When Van says yes; Michael informs him he is going to Las Vegas!

The Blue Team are the clear winners, as the Red team learns their punishment. They are in for a slimy, difficult day as it is fish delivery day. They are to bring in hundreds of pounds of the finest fish available. Descale and filet them, but it is not all bad news as there will be a very special lunch for them. He tells them to head for the patio as the Blue team heads off in their private plane to Vegas.

The Red team are carrying in the fish, as Michelle and Elise are getting along with Michelle showing her how to properly filet the fish. Suddenly, Barbie begins to throw shade at Michelle, insisting that she was taught by a Master sushi chef and Michelle is doing it wrong, but Michelle takes it in stride and says they were just taught differently and keeps going. Jennifer confronts Barbie on her attitude, who swears she doesn’t have a problem.

Sous Chef James “Jocky” Petrie brings the shakes for lunch for the Red team. He says its a protein drink, all of them are gagging. Barbie dumps hers in the bin, so now instead of just taking a sip of it, Jocky returns and informs them the entire team has to drink their entire shakes now. They all suffer through it, all thanking Barbie and calling her foul names. Meanwhile, the Blue team is enjoying dinner at Gordon Ramsay’s Bar and Grill in Las Vegas, where they are greeted by Chef Christina Wilson. She takes them on a tour of Vegas, reminding them that for one of them, this is going to be home.

The following day, both teams are preparing for the Asian Fusion night menu. Chef Gordon Ramsay tells Marino to open Hell’s Kitchen and dinner service gets underway. VIP guests like Aleks Paunovic, (Battlestar Galactica), E-40 (Rapper) and two Chefs tables – Cheryl Burke (Dancing with the Stars) is in the Red Kitchen and Dan Bucatinsky (Scandal) is in the Blue Kitchen. Chef Ramsay greets his chef tables but Barbie walks over and acts like an obsessive fan. Chef Ramsay asks Barbie to push the team but right away Elise feels she needs to take over to make sure she doesn’t sink the ship.

In the Blue kitchen, they seem to be meshing well, but Robyn goes over to the Chef’s table and begins to brag about her accomplishments this season as everyone else cooks; Nick thinks its important that she focuses on why she is really there. Ramsay is upset that now the blue team is slowing down and they all know it is thanks to Robyn.

In the red kitchen, Jennifer says it is always the same thing in their kitchen; Elise thinks she is Queen Bee and Barbie feels like she doesn’t do anything wrong and makes it suck for the entire red team. Christina tells them she is not doing it tonight and orders them to knock it off. Meat is brought up to the pass and the entire red team is called back to the pantry. He tells Barbie if she isn’t ready for the order to not send it; Dana says that for the 6th time, Barbie sucks! When she is offered help, she refuses. Elise says they can bounce back but Barbie gets mouthy.

In the blue kitchen, Van is told to start talking; they bring up their ticket and the lamb is beautifully cooked but the NY strip is raw. Milly says everything suddenly feels like it went in slow motion. Milly quickly recovers and meets the high expectations. Barbie returns to the chef’s table, who say their duck is a little pink. They don’t want another one, but she starts to get persistent and Chef Ramsay observes the entire exchange.

Elise apologizes for Barbie’s actions but when she returns to the kitchen she finds that Barbie isn’t listening to their guests and is making another duck dish anyways. Chef Ramsay has had enough of their fighting and calls them into the back. In the back room. Barbie lies, says the table wanted a new dish. Elise says she is lying. Chef leaves and orders them to sort this out. Elise says she is coo-coo and both leave the room without resolving anything.

Blue team is working together, but Van is still not talking. Chef Ramsay tells him to connect with him as he is getting pissed off now. Chef’s table is still waiting on their salmon, and when it comes to the pass, Ramsay sees that it is overcooked and says he trusted Van wondering where his bounce back is.

At the end of the night, both teams finished service but he was surprised by the amount of pain it took to finish service and the losing team is the both teams, he wants them to come up with two people on both teams that they feel they would be stronger without.

After a lot of arguing, the teams return to the dining room. Nick reveals the blue team’s first nominee is Robyn because she is still a little unsure of herself. The second nominee is Milly who had one of the poorest performances tonight. Chef Ramsay tells Milly, Robyn, and Van to step forward. Van says he is a hard worker and creativity and feels he could win this. Robyn says she is passionate, hardworking and loyal. Robyn goes back in line. Milly has the most passion and wants it more than life and is confident in his food. His decision is for Milly to get back in line.

Van approaches Chef Ramsay, he tells him to put his head up and focus and continue on the journey. Chef Ramsay says he isn’t done yet. Dana says the first nominee is Elise because she bullies members of the team and they can’t hear calls because she is fighting. The second nominee is Barbie because she doesn’t get along with the team and several poor performances in service.

He tells them both to step forward. Barbie says she has made mistakes but won’t make them again. She tries to get along with her team who don’t want to humble themselves nor be honest with themselves. Elise says she is the strongest member of the red team, on top of the challenges, unlike Barbie. Chef Ramsay says his decision is Elise and Barbie to both get back in line. He warns them all, to correct things or they will be gone.

“Van’s always had one of the loudest voices here but tonight not only did he lose his voice, but also his dream of becoming my next head chef!”
~Chef Gordon Ramsay