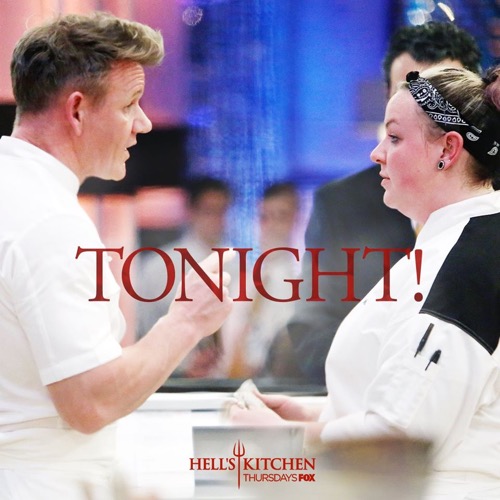 Tonight on FOX their Gordon Ramsay culinary competition series Hell’s Kitchen airs with an all new Thursday, January 26, 2017, season 16 episode 15 and we have your Hell’s Kitchen recap below. On tonight’s Hell’s Kitchen season 16 episode 15 episode called, “Tequila Shots?” as per the FOX synopsis, “Two eliminations precede a challenge in which the remaining contestants must create a unique dining experience for a large group of well-known chefs, including guest judges Bruce Kalman, Steve Samson, Mette Williams and Alessio Biagini. Then, the winner is taken on a helicopter tour of Los Angeles and treated to lunch with Gordon Ramsay.”

Tonight Hell’s Kitchen begins with only Ryan, Heather and Heidi remaining. Chef Ramsay informs the women that they need to get started right away on their next challenge. The dining room is going to be filled with an esteem group of judges and they are to all create their own table side dish for each one of them. Instead of getting any rest he sends them all to the grocery store to buy whatever they need to create that special dish.

The next morning, Chef Ramsay tells them to use their time wisely and they will be judged by every guest and once they have tried all the dishes, they will vote. The women are in awe of all the chef coats entering the dining room including Steve Samson, Chef and Owner of Sotto. Mette Williams Executive Chef of Culina. Alessio Biangini, Chef Du Cuisine of Cecconi’s. Bruce Kalman, Executive Chef and Owner of Union.

Things are going smoothly but when they shift to the last table, Heather makes the huge mistake of double-dipping her spoon right in front of Bruce Kalman and his table; Bruce called her out on it. She has no time to start over so she has to use what she has in one pan. Ryan is preparing her table but sharing tequila shots with the other chefs.

Chef Ramsay tallies up the votes and the winner had 62 ½ % of the votes, a clear winner. The winner of the first time ever table side challenge at Hell’s Kitchen is Ryan! Chef Ramsay tells her it was an amazing and very dominant performance. Ryan is happy that she won the challenge she was most afraid of.

Ryan’s reward is a tour of Los Angeles in a helicopter with Sous Chef Andi, after the helicopter ride she is to go to dinner at FireFly with Chef Ramsay himself. The punishment has to do with tonight’s Waitstaff Appreciation Day; Heather and Heidi need to wrap all the presents and iron all their personal uniforms.

While on the helicopter ride, Ryan asks Andi for any advice. She tells her she needs to find her voice. Meanwhile at the restaurant Heather is talking her head off, driving Heidi crazy. At FireFly, Ryan is happy to be able to talk to Gordon Ramsay. He says her instincts are good and she must remember who ever leaves the competition tonight must remain very proud. They cheers to Heidi and Heather’s punishment.

Just before dinner service begins in Hell’s Kitchen, Chef Ramsay tells the chefs that tonight’s service will determine who will enter the finale. They will have a Chef’s Table where Tara Reid, actress known for the Sharknado movie franchise will be. They will also face the critical test of running the pass. He needs to see them step up as a leader and to drive, push and demand what they need.

Chef Ramsay sets the pace while starting at the pass, as each chef is called to the pass, Chef Andi will take over their spot in the kitchen. Heidi is brought up to the hot plate first and Chef Ramsay explains what she needs to do. Heidi immediately fails her quality control test and Ramsay forces her to correct it.

Heidi does catch the second mistake, and Chef Ramsay praises her but Heather gives her first uncooked scallops, then broken ones. Chef Ramsay gets angry with Heather only 45 minutes into the dinner service, demanding to know what she is doing. Heather is called up to the pass now.

Marino gives Heather a ticket that has a mistake on it and she catches it right away. Heidi brings up Carbonara without shrimp nor calamari but Heather catches it again, Chef Ramsay is disappointed in Heidi. Heather fails the test when Andi gave her Arctic Char instead of Salmon. Chef Ramsay said it was a tough one, but she did a good job.

Ryan is up to run the brigade. As soon as Ryan calls out the tickets, everyone in the kitchen is confused because she calls out 2 tickets at once. She again fails a test because she didn’t taste the sauces. Ryan feels Heidi is sabotaging her, taking more than 11 minutes for risotto and Chef Ramsay calls Heidi out on her sabotage. Ryan does catch the mistakes from Chef Andi and Chef Aaron.

The remainder of dinner service finishes without many hiccups and Chef Ramsay tells them they did a good job. He says he is very proud of all three of them and instructs them to head off to the dorm and to come back with the one person who does not belong in the final. All three of them admit this sucks! Heidi and Ryan both choose for Heather to go home; Heidi deciding it solely on Heather and Andrew falling for each other. Heather fights for herself.

Chef Ramsay tells them it is a very difficult decision for him and one he will not enjoy making, but he wants to hear from each of them before he voices his choice. Heather feels Ryan doesn’t belong in the final. Ryan thinks Heather isn’t quite ready to be there. Heidi believes Heather shouldn’t be in the final.

He thanks them for their comments but chooses Heather to stay, saying she has gotten stronger and stronger as the competition went on. The other finalist is Ryan, she rushes to Chef Ramsay and hugs him. Heather hugs Heidi with tears in her eyes. Ramsay hugs her and tells her she did a great job and to keep her head up.

Ryan and Heather are told to enjoy the moment because they deserve it and one of them will be the Executive Chef at Yardbird.

“Heidi is a very talented chef with a bright future, but it will not be at Yardbird in Las Vegas!”
~ Chef Gordon Ramsay