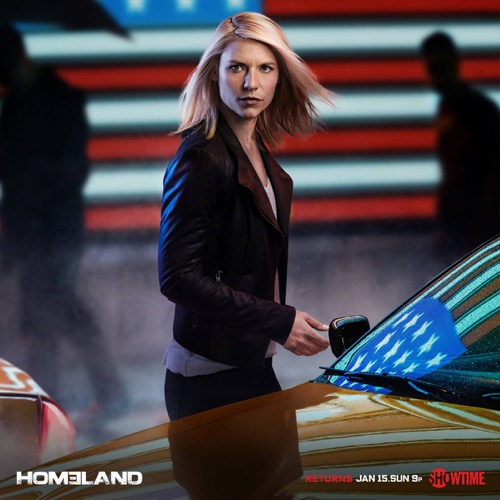 Tonight on Showtime their Emmy Award-winning drama series, Homeland airs with an all new Sunday January 15, 2017, season 6 premiere called “Fair Game,” and we have your weekly Homeland recap below.  On tonight’s Homeland Season 6 episode 1 as per the Showtime synopsis, “Season 6 begins with Carrie (Claire Danes) returning home to the U.S. with Franny to work as an advocate for Muslim Americans. Meanwhile, Dar (F. Murray Abraham) and Saul (Mandy Patinkin) brief President-elect Keane; and Quinn (Rupert Friend) struggles with his new circumstances.”

Tonight’s episode of Homeland kicks off with Carrie Mathison searching for Quinn – she finds out that he didn’t go to physical therapy…again. Carrie tracks him down and tries to speak to Quinn, but he doesn’t want to hear it. Carrie shouts at Quinn that he needs to stay with it or he will never make any progress. Quinn snaps back at her and they have an altercation in the middle of the hospital.

The doctors separate Quinn and Carrie. After Quinn heads back to his room, Carrie gets more bad news. The doctors think that she should stop visiting Quinn for a while, and believe that she is actually hurting him more than she is helping him.

The inauguration is just a few days away, President-elect Elizabeth Keane has been doing hours of briefing. She calls Saul and Dar to her office to discuss the war. Keane is not a fan of the war against Isis, she shocks them by saying she wants to bring home all of the American troops – the war is not winnable.
Saul warns Keane that the way may not be winnable, but while keeping the troops there they are containing the enemy and Isis.

Saul and Dar need to discuss Operation Signpost – a covert action and collection against Iran, they are funded at $85 Million and obtaining information from Iranian computers. Keane says she wants to “skip ahead to the good stuff” and be briefed on the US’s drones and warfare.

On the other side of town, a Muslim teen leaves his apartment complex and takes a car to the Marriott. He’s filming a video about the very first Al-Qaeda attack on American soil, Meir Kahane was assassinated right there in that hotel by a terrorist.

Carrie heads to work, she’s working as an advocate for Muslim Americans now. When she arrives at the office, she is surprised to see Otto there. He’s there for work stuff, but he corners Carrie and asks her out to dinner later. She turns him down. Otto snarks that what she is doing as an advocate is “small potatoes.”

Otto changes the subject and announces that he “has met someone.” Carrie is infuriated and tells him to get out. Before Otto leaves, he makes one last Hail Mary to get Carrie back to real work, and leaves a gift.
At the hospital, Quinn is up to something – a janitor sneaks him out the back door and they hop in a car and drive off with Clarice.

Saul and Dar discuss their meeting with Elizabeth Keane – which didn’t go too well. Dar thinks that Keane is acting out personally, her son was killed in Iraq at war. He has a feeling that Elizabeth holds a grudge against them and their military and is going to make their lives a living hell.

Quinn heads to a check cashing place and pays off the janitor, then he leaves with Clarice. Despite his state, she even lets him drive. They head to a nearby drug den and pay $200 for a room in the house full of prostitutes so that Quinn can get high.

Dar has a secret meeting with someone from Israel and warns them that the new President-elect is not a fan of their covert operation. They have minimum 8 weeks to get the job done in Iran before Elizabeth takes over and pulls the plug.

Sekou Bah, the young man posting pro-Al Quaeda videos on his website has the FBI storm his house in the middle of the night. They arrest him for “inciting terrorist violence” and encouraging others to take a stand against America. Carrie and Reda take on the case – Carrie is certain that Sekou’s rights are being violated, and after all he is just a kid. The FBI on the other hand is certain that Sekou is “home-grown Jihad.”

Carrie gets a phone call from the hospital and rushes there when she learns that Quinn is missing. After questioning the employee that helped Quinn sneak out, Carrie track him down at the drug den. He has a bad gash on his head because he was beaten up and robbed. Carrie isn’t impressed, she drags Quinn back to the hospital.

Quinn is in bad shape – when he walks in the hospital he begins freaking out and fighting with Carrie, guards rush to help Carrie and tackle Quinn.

Carrie feels guilty, she takes Quinn home with her. She doesn’t have the heart to make him stay at the hospital any longer. Carrie moves Quinn in to empty apartment in her house and warns him not to bring any shady people over or do any drugs in the house because she and Franny live upstairs. Before Carrie leaves, she orders Quinn to take a shower.

Later that night when Carrie is tucking Franny in to bed, Quinn wanders through the house and jingles her door trying to get in, but Carrie ignores him.

Meanwhile, Sekou Bah is still in jail. He spends the night in solitary confinement on his prayer mat.

Tonight’s episode of Homeland ends tonight with Dar holding a secret meeting, Saul is not invited.