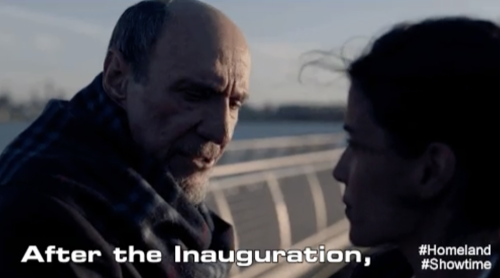 Tonight on Showtime their Emmy Award-winning drama series, Homeland airs with an all new Sunday January 22, 2017, season 6 episode 2 called “The Man in the Basement,” and we have your weekly Homeland recap below.  On tonight’s Homeland Season 6 episode 2 as per the Showtime synopsis, “Carrie (Claire Danes) and Reda fight for their client; Quinn (Rupert Friend) battles against his new life; Saul and Dar (F. Murray Abraham) suspect Keane has a secret.”

Tonight’s episode of Homeland kicks off with Quinn sitting at home in the dark and listening to political rant on the radio.

Carrie and her daughter Frankie are upstairs in their apartment, Carrie’s little girl is curious about who is living in the house with them. Carrie makes up a story to prolong Quinn and her daughter from interacting. Frankie is picked up for school and then Carrie gets started trying to get Quinn’s prescriptions straightened out.

Carrie tries to get Quinn to take his medicine, but he refuses to open the door. He smashes the glass on the door and turns up the radio so that he can ignore Carrie. She pleads with him to take his meds, if he doesn’t, he could go in to convulsions. Carrie calls Max in for

Carrie calls Max in for reinforcements. She has to get to work – she tells Max to make sure that Quinn takes his medication while she is gone.

Carrie meets up with Reda and they pay their new client a visit it at the jail. Sekou is in deeper trouble than he realizes. Apparently when the FBI searched his house, they found $5,000 in cash hidden under his bed, and they are claiming that Sekou was going to give the money to an Islamic state to fund terrorism. Sekou insists that the money was just a loan from his friend Saad Mahsud to help pay for his trip to Nigeria to see his father.

Carrie and Reda get to work trying to track down Saad so that they can verify Sekou’s story, but Saad seems to have disappeared. Sekou’s little sister was secretly dating Saad behind Sekou’s back – she promises to try and help Carrie find him.

Back at her office, Carrie gets a surprise visit to Saul – but it doesn’t turn out to be a friendly one. Saul is still not happy with President Elect Keane, and her thoughts on military and CIA practices. Keane’s ideas seem very similar to some of the ideas that Carrie was pushing, Saul accuses Carrie of secretly advising Keane. Carrie is furious – she kicks him out of the office.

Meanwhile, Dar is meeting with Rob. He got intel that Iran is cheating on the nuclear deal, and the US’s partners the Israelis are going to pick up the Iranian nuclear scientist.

Carrie has Max get to work on a picture of Saad, and he learns something interesting. It turns out Saad recently changed his name, he used to be in a gang in Pittsburgh, they were busted for dealing drugs. Saad ratted out his gang and now he is a confidential informant for the FBI. Sekou’s case is getting very complicated, very fast.

Carrie and Reda head before the judge to request access to Saad from the FBI. The FBI is hiding Saad, Carrie argues that the FBI entrapped Sekou by having Saad give him the money. The judge doesn’t see things their way though – due to National Security, Saad the informant is off hands. The prosecutor does make an offer for Sekou though – he could cop a plea for 7 years right now.

Quinn wanders out of the house and to the corner stone. Max follows him, and while Quinn is wandering through the store, he drops to the floor and begins having a seizure. Max calls 911 and the EMT’s arrive and stabilize him, but Quinn refuses to get in the ambulance and go back to the hospital.

Carrie and Reda head back to the prison to talk to Sekou. He is shocked when he learns that his friend Saad was working for the FBI and was setting him up. Reda shares the plea bargain with Sekou, and when he hears that it is for 7 years, he freaks out and the guards drag him back to his cell.

Carrie tells Reda that something has come up, and she rushes out of the prison. Men in an SUV pick her up and take Carrie to a secret meeting with Rob and President Keane. It turns out that Saul was right to be suspicious, Carrie is Keane’s advisor. Carrie and Rob fill Carrie in on Saul’s proposal – Carrie says that their only option is to send Saul is to oversee the Israeli investigation, he wants the Iran deal to work and he is trustworthy.

Carrie teams up with Sekou’s sister Simone and they meet up with Saad. Carrie confronts him and tells him she knows all about his deal with Conlin and the FBI. Saad confesses that Conlin made him give Sekou the money, and Saad told the FBI that Sekou wasn’t a terrorist – but the FBI wouldn’t back down. Apparently, Conlin promised Saad he would make sure he didn’t do any prison time.

Carrie heads home and her daughter is already in bed, she checks in on her and tucks her in. Max tells Carrie that Quinn had a seizure at the store, she’s livid that no one called her and told her. Max tells Carrie to just drop it, they have a bigger problem, Quinn is not getting better and he’s not happy.

After Max leaves, Carrie heads downstairs to talk to Quinn. Quinn asks to see the video of himself that was posted online when he was being held captive. Carrie is surprised that he never saw it, she reluctantly agrees to play it for him. She explains how she found him from the clues in the video and he flatlined in the ambulance. Max wants to know why Carrie saved him – she gets choked up and begins sobbing. Carrie excuses herself and heads upstairs, leaving Quinn alone in the dark basement.