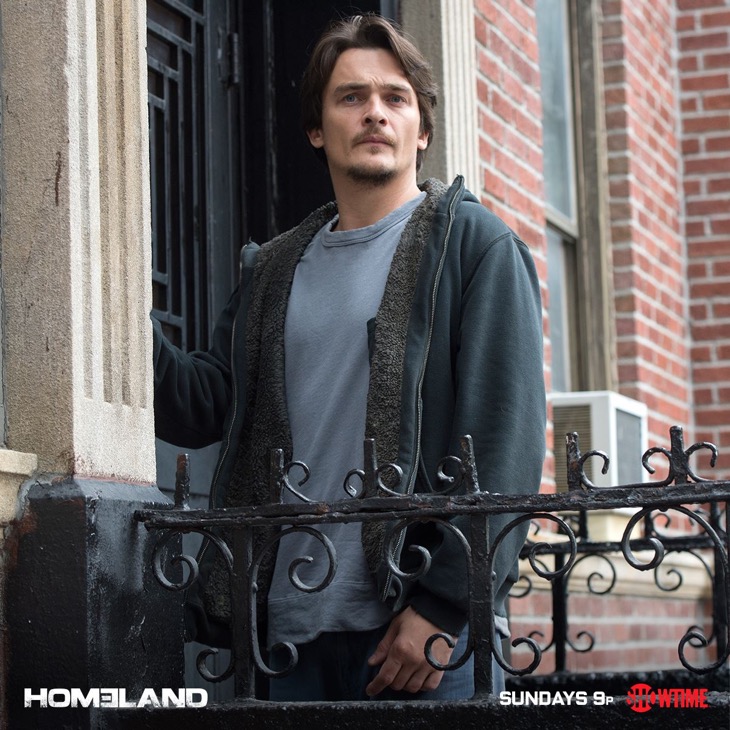 Tonight’s episode of Homeland kicks off early in the morning, Quinn wakes up screaming from a nightmare. Carrie rushes to check on him and comforts him. While Carrie is hugging Quinn, he tries to slip a hand up a her shirt. Carrie snaps at him and demands to know what he is doing. She scolds him and reminds him that her daughter is upstairs and he needs to get it together.

Carrie gets a phone call from Reda, he demands that she come straight to the office. Apparently online called form the FBI and he is furious that carrie ignored a court order and was questioning his informant.

Meanwhile, Saul has just arrived in Abu Dhabi – and it looks like his trip is going to be an eventful one. While riding in a cab, the driver notices that they are being trailed. He hops out of the car and is picked up in a crowd on a busy sidewalk by his contact – a woman on a motorcycle.

When Carrie arrives at the office, Reda is not a happy camper. He just got off the phone with the judge – they withdrew Sekou’s plea deal and now he is going to trial, because of what Carrie did. It looks like they are going to trial, and Sekou is facing 15 years. Reda is having second thoughts about working with Carrie.

In Abu Dhabi, Saul works with the Israelis to set up a meeting with Farhad Nafisi, an Iranian delegate who is negotiating an arms’ deal on behalf of Iran. The Israelis basically kidnap Nafisi, and they blackmail him with photos of him having an affair with a woman from Israel.

Carrie heads to the prison and meets with Sekou. She explains that she screwed up and confronted Saad, and the judge is withdrawing the plea deal. Sekou freaks out, Carrie promises to fix it, but he doesn’t want to hear anything else she has to say and marches out of the visitation room.

Saul goes through Nafisi’s phone and learns that he has a $120 Million line of credit at First Emirates Bank, and he has withdrawn over half of it in the last few weeks. Saul is certain that he is using the money to fund terrorism.

Nafisi claims that the money is for a down payment on Russia anti-aircraft batteries. The Russians aren’t making them available until next year, but Iran is getting access to theirs early. Nafisi laughs off Saul’s accusations and says he has never even been to North Korea. Saul cuts Nafisi loose, but warns him to stay in line and he better be telling the truth, or else they will email the photos to everyone in Nafisi’s contact list.

After the interview, Saul shreds Nafisi’s file before he heads home. Something intrigues him about Nafisi’s empty cigarette pack and he puts it in his pocket.

Carrie pops up unexpectedly at Roger’s house. She asks him to do her a favor and pull phone conversations between Conlin and Saab. Roger is appalled she would even ask him something like that and warns her that this is the kind of thing that ends careers.

Saul calls Dar and tells him that he is taking an unplanned trip to see his sister after he leaves Abu Dhabi, and Dar is going to have to brief President Keane on his own.

Dar heads to Keane’s office, he exaggerates a bit and says that according to Saul the Iranians have definitely violated the nuclear agreement and they are working with Korea. The things is, Saul wasn’t sure that their suspicions were right.

At Carrie’s office, she receives a bouquet of flowers and in the envelope is a flashdrive from Roger with Conlin and Saad’s conversations on it. On the recording, Saad clearly tells Conlin that Sekou is not their guy nor a terrorist. But, Conlin pressures Saad in to getting Sekou to take money from him.

Carrie marches in to Conlin’s office and plays the recording for him. She accuses him of fabricating evidence and obstructing justice. Carrie tells Conlin to drop the charges against Sekou, or else she is taking the recording to the Attorney General and letting him know what Conlin has been up to.

Quinn is home alone all day and he’s not doing well. He tracks down the woman that took him to the drug den and got him robbed, Quinn demands that Clarice take her to Tommy’s house. Quinn lies and says he wants to buy his gun from him. Then Quinn knocks him out, and steals the gun. Before Quinn leaves, he announce that they are even now.

Carrie heads to a secret meeting with President elect Keane, Keane fills her in on what Dar told her about Iran and their program with North Korea. Carrie is skeptical, she tells Keane she may not be able to trust Dar and to wait for Saul’s report when he returns before she makes any decisions. Little do Carrie and Keane know, Dar has the place bugged and he is listening in on their entire conversation.

Carrie gets home late at night and heads inside. Little does she know, Quinn is lurking in the shadows next to her house with his new gun, and he is convinced that someone is watching him and coming for him.