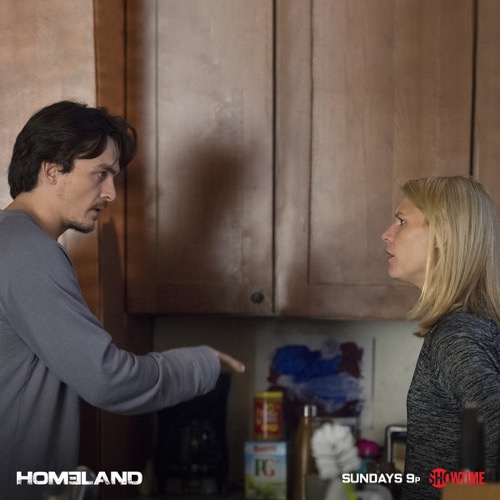 Tonight on Showtime their Emmy Award-winning drama series, Homeland airs with an all new Sunday, February 12, 2017, season 6 episode 4 called “A Flash of Light,” and we have your weekly Homeland recap below.  On tonight’s Homeland Season 6 episode 4 as per the Showtime synopsis, “Carrie (Claire Danes) handles her client; Saul’s (Mandy Patinkin) trip takes a turn; Quinn (Rupert Friend) investigates.”

Tonight’s episode of Homeland picks up where we left off last week, Saul is in a car sneaking back from his sister’s house. Suddenly, the car pulls over and men speaking Arabic grab Saul and kidnap him.

Meanwhile back in the states, Sekou is released from prison and the FBI has dropped all charges. Carrie picks him up from the court house and there is a flurry of reporters. Once Sekou is safe in the car, Carrie tells him that they are going to release a statement saying there wasn’t enough evidence to indict him, but there is one condition, Sekou can’t go public or do any interviews on what happened. He has to keep his mouth shut.

President Elect Keene is preparing for a conference with the media. Joey shows her an article in the Times to give her a heads up. The media is having a field day with the fact that Dar told Keene about what Iran is up to and she hasn’t addressed it yet. Keene corners Dar and accuses him of firing up the press, she informs him that she is not making any moves regarding Iraq until she actually sees Saul’s report with her own eyes.

Carrie and Reda take Sekou home where his friends and family are waiting to celebrate. Reda is skeptical, he’s upset that Carrie cut a deal with the FBI without him. Now, Sekou can’t file a civil suit against the FBI, and Reda thinks that he deserves to be compensated. He warns Carrie that she can’t keep going behind his back.

Carrie gets a text and rushes out of the party, she’s picked up by a black SUV – Reda watched her leave out the window and is obviously suspicious. Meanwhile, some of Sekou’s friends are harassing him, they think that he went informant, and that is the only way that he got out of jail. Sekou skips out on his own party and heads to his bedroom and starts recording a video to post online.

Saul is blindfolded and taken to a secret meeting, he’s surprised when his blindfold is removed and Majid is standing in front of him. Apparently, Saul has been trying to get meeting with him, even though its very risky. Saul explains that he met with Nafisi. He demands to know if Majid is cheating on the nuclear deal. Saul knows that Nafisi flew to Korea and that he took out $120 Million from Emirates Bank. Majid doesn’t know what Nafisi is up to, but he agrees to do some digging and let Saul know.

Quinn is sitting in the house alone, and loading a hand gun. He stakes out at the window – convinced that someone is watching him and following him.

Carrie is rushed to an emergency meeting with Keene. She and Joey fill him in on the drama with Dar and the article in the Times. They tell Carrie that she needs to shut down Dar, they need something to use as leverage against him. And, they know that if anyone has dirt on Dar, it’s Carrie. She’s offended that they are even asking her, and reminds them that she had to sign confidential agreements when she left the agency. Plus, if she throws Dar under the bus, she will be hurting Saul too.

Quinn is certain that a man across the street, living in the adjacent building is following him. Quin waits with his gun until he sees the stranger leave his house. Then, Quinn sneaks across the street and picks his lock so he can snoop around his apartment. He finds a stool inside of the apartment, set up perfectly so that the man can watch Carrie’s house. Also, there are photos of a black family hanging on the wall, but the guy that has been going back and forth is clearly white. He returns and Quinn rushes out of the apartment building after lying and saying he was just dropping off some mail.

Dar corners Carrie while she is picking up her daughter from pre-school. Dar reveals that he knows Carrie is working with Keene and advising her. Dar snaps at Carrie that she left the agency 3 years ago, and everything has changed, shes basically obsolete and is not doing Keene any favors.

Saul returns to his sister’s house and she is upset with him for sneaking out – she accuses him of meeting with an Arabic and putting her in a dangerous position. While they are bickering, Etai shows up at the door and questions Saul about where he was last night. They had reports of an Iranian crossing the border, and it’s not a coincidence that Saul is in town.

Carrie returns home and Quinn tries to tell her about the man watching her house. She brushes him off as if he’s just being paranoid. Carrie gets a phone call from Reda, he’s freaking out because Sekou posted another video and outted the FBI’s informant Saad. Carrie rushes over to Sekou’s house to try and get him to take the video down before he loses the deal.

Etai tells Saul’s sister that he’s taking Saul to the airport, but instead he locks him up and informs Saul that Tovah will be there in the morning. They know that Saul has info about the Iranian nuclear weapon.

Back in the states, Quinn is still watching the man across the street. After he sees him leave his apartment again, he is picked up by a car. Quinn steals Carrie’s car keys and follows the car. He snaps photos of the man being dropped off at what appears to be a factory and a parking lot full of delivery trucks with Medina written on them.

In the morning, Sekou wakes up at the crack of dawn and heads to work, where he drives a delivery truck. The same delivery truck where Quinn followed the mystery man the night before. Sekou gets in his truck and heads down the highway, and the truck explodes.