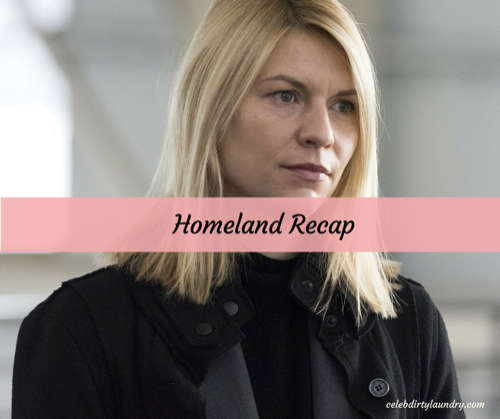 Tonight on Showtime their Emmy Award-winning drama series, Homeland airs with an all new Sunday, March 12, 2017, season 6 episode 8 called “alt.truth,” and we have your weekly Homeland recap below.  On tonight’s Homeland Season 6 episode 8 as per the Showtime synopsis, “Carrie (Claire Danes) and Saul present evidence to Keane; Quinn tracks a mark.”

Tonight’s episode of Homeland kicks off with Brett O’Keefe’s news series, he’s been on a mission to make President Elect Keene look unfit to be the President. In this segment, O’Keefe has brought in ex-soldiers that were in the line of duty with Keene’s son Andrew. He was killed at war. But, according to O’Keefe, he didn’t die a hero – he was dangerous, and he is interviewing men that were overseas with Captain Keene.

O’Keefe brings on a soldier named Rudy, he was there when Andrew Keene was killed. Rudy explains that they were searching a warehouse, and they were ambushed by enemy fire, while they were under fire Andrew ran away and abandoned his men and was shot by a sniper in the back. Rudy says that Andrew Keene was “the opposite of a hero.”

Elizabeth is at the White House, unfazed or unaware of O’Keefe’s latest broadcast, her chief of staff Rob briefs her on her meetings. She sits down with the Admirals to discuss the status of their forces.
Saul meets up with Majid, he’s been hiding him out at a local homeless shelter. Saul explains that he will have to stay at the shelter for a few more days, he hasn’t had a chance to talk to President-Elect Keene yet.

Saul leaves the shelter and stops by Carrie’s house to talk to her. Max warns Saul that Carrie probably won’t speak to him – she’s depressed and hasn’t left Frannie’s room for a day. Carrie explains that she has to go through a psych evaluation and therapy and the judge will consider giving her daughter baPresident-Elect to help, but there’s nothing he can do.

Saul changes the subject, he tells Carrie that he needs her help. Carrie cries that things were supposed to be different, and now she has been deemed an unfit mother.

Meanwhile, Peter Quinn is still out in the cabin in the middle of the woods with Astrid. After they take an afternoon walk, Quinn heads inside and begins searching through the kitchen drawers. He finds an envelope full of a fake Passport that was made for him, his meds, and a stack of cash. While Astrid is still out exercising, Quinn sneaks in to her car and empties the bullets out of her gun and throws them in the lake.

Saul takes Carrie on a ride, he found out where Frannie is staying and takes Carrie to the foster home. They sit outside in the car and watch Frannie play outside with the other kids, she seems happy and healthy. Now that Carrie has settled down a little, Saul explains to her what happened when he met with Nafisi, and that he’s a Mossad agent and was working with Dar. Saul reveals that Majid Javabi is in New York and waiting to see President Elect Keene to tell her the truth about the Iran nuclear deal, and the Mossad set-up.

Carrie isn’t surprised that Dar is double-crossing Saul. She explains that she thinks Saul is behind Sekou’s van exploding and FBI Agent Conlin’s murder.

Quinn is at a local store near the cabin when he sees a man at the cash register and thinks he might be the man that was spying on him and Carrie and blew up Sekou’s truck. Quinn stalks him in the store and watches him drive off in a truck. Astrid is totally oblivious to Peter’s observations, and they head back to the cabin. On their way, they drive past a shady motel and Peter recognizes the man in the parking lot again.

Quinn’s paranoia is kicking in. He freaks out on Astrid when they return to the cabin and accuses her of giving the man at the store a message – he is certain that Dar has plans for him, and they aren’t good.

Carrie and Saul pick up Majid from the shelter and take him to a secret meeting with President Keene. But, Majid changes his story once he gets in front of Keene. Suddenly, Majid announces that the American deal with Iran is off, and that Iran is working on a parallel nuclear deal with North Korea. Saul freaks out and demands to know what he is doing.

Carrie chases after Keene as she leaves the meeting. Keene believed Majid, she tells her that she and Saul were wrong. And, she was wrong to have turned to Carrie for guidance, they are officially done working together.

Saul confronts Majid and demands to know what he is up to. Majid pushes Saul to the ground and reveals that he is working with Dar now, then he rides off in his car.

Meanwhile, Dar is meeting with O’Keefe. He shows him all of the footage that he has been working on to prove that Keene’s son Andrew was not a hero. The video is completely edited, and grossly misinforming.

In the middle of the night Quinn sneaks out with Astrid’s car and heads to the motel. He finds the man in the black hate and hits him over the head with a crow bar. Then when he rolls him over, he realizes that it’s the wrong guy.

Quinn races back to the cabin, and can’t find Astrid anywhere. She finally emerges from upstairs, and Quinn is thrilled that she didn’t leave him after their fight. But, it turns out that the only reason she didn’t leave is because he had her car. Quinn begs Astrid to stay, and offers to let her punch him so that they are even.

Astrid and Peter share an intense moment, he confesses that he cares for her and thinks of her as a friend. Out of a nowhere, a shot rings out, a sniper is shooting at them. One of the bullets grazes Peter’s head and he falls to the floor, it’s not fatal though. Astrid makes a run for the car to get her gun, unaware that Peter threw all of her ammo in to the lake. She’s hit once by sniper fire, and manages to get her gun. She tries to take a shot at the shooter, but the gun’s empty and simply clicks when she pulls the trigger.

The sniper shoots and kills Astrid and then heads inside to find Peter. It’s the same man in the black hat that was spying on Carrie’s house. Peter tries to make a run for it, the gunman follows him outside and shoots him in the back, Peter Quinn falls in the lake and disappears. The shooter waits, but he never comes up for air.

After the shooter leaves, Quinn comes up for air…finally. He’s banged up, but he’s going to be okay.