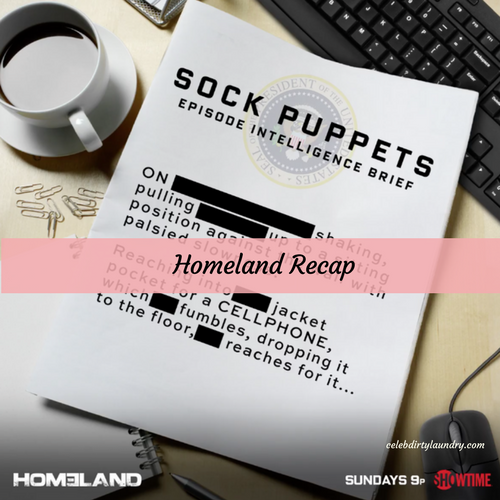 Tonight on Showtime their Emmy Award-winning drama series, Homeland airs with an all new Sunday, March 19, 2017, season 6 episode 9 called “Sock Puppets,” and we have your weekly Homeland recap below.  On tonight’s Homeland Season 6 episode 9 as per the Showtime synopsis, “Carrie (Claire Danes) catches a break; Keane makes a plan; Max goes undercover.”

Tonight’s episode of homeland kicks off with Carrie in court-ordered therapy. If she wants to get Frannie back, she needs to cooperate with the therapist. Carrie opens up about her complicated relationship with Frannie’s dad, and her relationship with Quinn.

President elect Keane calls a meeting with Dar. She confesses that it looks like he was right and Iran is cheating on the nuclear deal. Obviously, he already knew that since he told Majid to say that. Keane has had a change of heart and she wants Dar’s advice, they agree to move forward with sanctions against Iran.

Carrie heads home and rants to Max about the therapy session. Max has been hard at work while she was away, he tracked down Conley’s phone records, and found the address of the warehouse he visited before he was killed. Max says that he thinks the address is some sort of shady start-up company. They have as many questions about the strange building as Conley did.

Max reveals that he decided to apply for a job there, and he is going in for an interview this afternoon. Carrie thinks it’s a horrible idea, she doesn’t want to put any more people she cares about in danger.

Dar has a celebratory breakfast with Majid. Apparently, Majid received millions of dollars for helping Dar convince Keane to take actions against Iran. He’s not going to see a penny of it though. Dar sold Majid out to Mossad. There’s a knock at the door – Mossad agents enter the hotel room, they’ve come for Majid and they’re not happy. While Majid is begging for his life, he calls Carrie on his cell phone so that she can hear what is happening.

Carrie calls Saul and patches him in on the call, so he can hear Dar and Majid. Saul tries frantically to trace the call. But, they aren’t successful. The Mossad agents stab Majid with a syringe and knock him out, then wheel him out of the hotel room in a laundry cart.

Local cops show up to the cabin In the woods where Peter and Astrid were staying, neighbors reported shots fired the night before. Quinn is sitting in the dark room with Astrid’s dead body. She has bandages on her neck, it looks like he tried to save her. Quinn leaves Astrid’s body and slips out the back, and drives off in her car.

Carrie and Saul arrive at the hotel, but Dar and Majid are long gone. They search the hotel to no avail, but they do find Majid’s cell phone. Carrie and Saul take the phone to Keane, there’s a recording on it proving that Nafisi lied and Dar used Majid to make Keane think that Iran was cheating on the nuclear deal.

Keane is obviously furious that Dar betrayed her, she shouts that he’s a “little shit.” There’s even more bad news though – Carrie fills Keane in on the bombing, and that the bomb in Sekou’s van was planted there. Carrie thinks that Dar may be linked to the bombing as well.

Meanwhile, Max is at his interview at the mysterious ware house. He makes it through the first stage of the interview process, but he has to wow the man in charge and explain a gap in his resume. Interestingly, the guy in charge is the same radio host, O’Keefe, that Dar has been working with to help bring down Keane. Quinn stops in a local plaza late at night, he creates a distraction in the parking lot and rushes inside a gun store and steals several weapons and ammunition.

Quinn stops in a local plaza late at night, he creates a distraction in the parking lot and rushes inside a gun store and steals several weapons and ammunition.

The next morning Keane calls Carrie in for a meeting with some members of her administration. They explain to Carrie that they don’t have enough evidence to take down Dar for lyig about Iran or possibly being linked to the bombing and Conley’s death. But, they won’t to go after Dar for espionage for lying about his Berlin reports. They just need a sworn statement from Carrie. She doesn’t want to sign the papers though, because if they go after Dar for lying about Berlin, that would mean that Saul would be in trouble too.

Afterwards, Carrie meets up with Saul and fills him in on the meeting. He’s obviously not happy about being thrown under the bus and taking one for the team so that Dar can be stopped. While Carrie and Saul are arguing, she receives a phone call from Child Services. The therapist approved a meeting for her and Frannie tomorrow.

Dar and Keane had a meeting already scheduled. Keane takes the meeting, and tries not to tip her hand and let Dar know that they are on to them. But, she’s not a great bluffer, and Dar knows that something is up.

Meanwhile at Max’s new job, he gets sent to work. He’s shocked when he realizes that the warehouse is full of social media gurus that manage hundreds of fake facebook, twitter, and other social accounts.

Dar heads home and pours himself a drink, he’s shocked to find Peter Quinn standing in his livingroom. Quinn has brought along an arsenal and accuses Dar of sending someone to try and kill him, and kill Astrid. Dar plays stupid, he says he has no idea what Quinn is talking about and he never tried to hurt him. Dar reminds Quinn that he raised him like a child, and tells him that he loves him.

Quinn is rattled by what Dar is saying. He hits Dar over the head with the fun and runs out of the house and gets in his car. As soon as Quinn leaves, Dar calls his hit man and calls him a “moron.” Apparently, Dar told him not to go after Quinn and he did anyway. The hitman curses Dar out for calling him on an open line and hangs up.

Quinn has bugged Dar’s phone, he listens in on the entire conversation and tracks the hitman’s location.