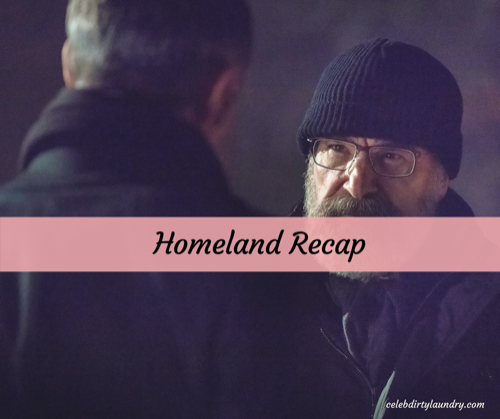 Tonight on Showtime their Emmy Award-winning drama series, Homeland airs with an all new Sunday, March 5, 2017, season 6 episode 7 called “Imminent Risk,” and we have your weekly Homeland recap below.  On tonight’s Homeland Season 6 episode 7 as per the Showtime synopsis, “Carrie (Claire Danes) gets bad news; Saul makes a plan; Quinn acknowledges his situation.”

Tonight’s episode of Homeland kicks off with Carrie receiving bad news – as if she didn’t have enough to deal with now that Conlin is dead and she may or may not be the next mark on the mystery man’s hit-list, the former CIA agent’s daughter Franny is taken by Children’s Services. Apparently, Carrie is under investigation after Peter “took her hostage,” although we all know in Peter’s eyes he was protecting her.

Meanwhile, Peter is removed from the mental hospital where he was being held and taken to a cabin in the woods in the middle of nowhere by some of his former co-workers with the CIA. It turns out that Dar is behind the move, and he argued that Peter was a CIA asset and managed to make the shooting “go away,” but as part of the deal, Peter needs to remain out of sight. Peter Quinn tries to make a run for it and hitchhike, but it’s not long before Astrid drags him back to the cabin.

In the meantime, Saul is in a bit of hot water as well. A woman named Rachel was sent by the director to question him about his trip to the West Banks. Dar arrives midway through the questioning and tells Rachel to get lost. Saul isn’t buying it though – he thinks Dar set up the questioning, he’s clearly up to something.
Carrie meets up with Reda to discuss her chase with children’s services. Carrie is freaking out because they have moved Franny to a foster home. Reda will be going to court in the morning on behalf of Carrie and he reassures her that everything will be fine.

Javidi is in New York for a meeting, and it doesn’t take long before someone comes looking for him. Naser and his men kidnap Javidi and take him to an abandoned warehouse, they proceed to torture him and demand to know what he is doing in the states. Javidi says he’s just checking on an asset, but Naser isn’t buying it. A man named Amir rushes in and saves the day and shoots and kills Naser. Javidi is grateful, and shocked, the man introduces himself as Amir – apparently, he served in the army with JAvidi years ago.

Carrie and Reda heads to court, and Carrie gets more bad news. She won’t be getting her daughter Franny back anytime soon. Ever though Peter Quinn is out of the picture, child services thinks that Carrie is a danger to Franny too. Apparently, Franny told the case worker that her mom fell asleep in her room with a gun on her lap. Now, the case workers want Carrie to undergo a mental health evaluation since she was diagnosed with bipolar disease in the past.

Carrie heads home, alone, which isn’t easy for her. She contemplates drinking an old bottle of wine stashed in the back of her refrigerator.

Amir tracks down Saul and takes him to a secret meeting with Majid. Majid explains that he was picked up by his own people, and accused of being a traitor. Majid and Saul put two and two together and realize that Dar must be behind it. Majid says that he has proof on video that Iran is not cheating on the nuclear deal, and he wants political asylum. Saul agrees to get him a meeting with President-Elect Keane.

Dar shows up at the cabin and Astrid greets him, he’s come to talk to Peter Quinn. Dar finds him sitting on the dock in front of the lake, he hasn’t been talking for hours.

Dar tells Quinn he has to stay at the cabin – if he tries to go back to NYC again, he will either be thrown in jail or back in the hospital. Dar quizzes Peter about why he is trying so hard to get back, but Peter won’t talk. Dar mocks Peter for being hung up on Carrie, then he drops a bomb on him. Dar reveals that the reason that Peter is the way he is…is Carrie’s fault. Dar explains to Quinn that Carrie forced the doctors to wake Quinn up out of a deep coma, because she thought he might have intel on a case she was working. The only reason Carrie has been taking care of him, is because she feels guilty.

At home, Carrie calls President Keane in the middle of the night. She cries that child services took Franny and she needs Keane to make a phone call on her behalf. Keane is appalled that she’s asking her to use her spot in the White House to solve her personal problems.

Tonight’s episode ends with Dar getting a phone call from the case worker that took Franny from Carrie. She thinks him for the tip he gave her, and says that Franny is in foster care where she belongs.